A regular reader of my blog commented to me, rather offhand, "To read your posts, you sound awfully sure of yourself.  A little arrogant, even."

I'll leave the last part to wiser heads than mine to answer; I may well have an arrogant streak, and in fact I've remarked more than once that to have a blog at all implies a bit of arrogance -- you have to believe, on some level, that what you think and write will be interesting to enough people to make it worth doing.  But I'd like to leave my own personality flaws aside for a moment, and take a look at the first part of the statement, which is saying something quite different, I think.

In saying that I sound "sure of myself," the fellow who made the comment was saying, so far as I can tell, that I sound like I've got all the answers; that my pronouncements on ghosts and faces on grilled cheese sandwiches and Bigfoot, and -- on a more serious level -- science, ethics, politics, philosophy, and religion, are somehow final pronouncements of fact.  I come across, apparently, as if I'm the last word on the subject, that I've said fiat lux in a booming voice, and now all is light. 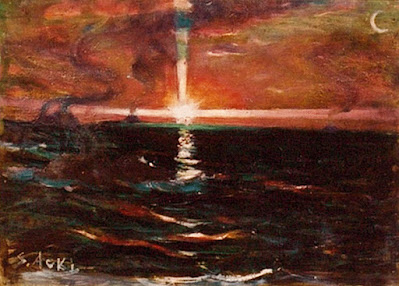 Let There Be Light by Shigeru Aoki (1906) [Image is in the Public Domain]
Nothing could be further from the truth, both in fact and in my own estimation.

It's because I have so little certainty in my own senses and my brain's interpretation of them that I have a great deal of trust in science.  I am actually uncertain about most everything, because I'm constantly aware about how easily tricked the human brain is, and how often our "common sense" is wrong.  Here are five examples of just how counter-intuitive nature is -- how easily we'd be misled if it weren't for the tools of science.  I'll present you with some explanations of commonly-observed events -- see if you can tell me which are true and which are false based upon your own observations.
Ready for the answers?

All of them are false.
All of this is just to indicate that our intuition, our "common sense," and even our sensory information, can sometimes be very misleading.  Science is our only way out of this mess; it has proven itself, time and again, to be the very best tool we have for not falling into error because of the natural mistakes made by our brains, the fallacy of wishful thinking and confirmation bias, and being suckered by charlatans and frauds.

A charge levied against science by some people is that it changes; the "truths" of one generation may be different from those of the next.  (I call this the "They Used to Believe the Earth Was Flat" argument.)  Myself, I find this a virtue, not a flaw.  Science, by its nature, self-corrects.  Isn't it better to put your trust in a world view that has the capacity to fix its own errors, rather than one which promises eternal truths, and therefore doesn't change regardless of the discovery of contrary evidence?

I realize that this line of reasoning approaches some very controversial thin ice for many people, and I've no intent to skate any nearer to the edge.  My own views on the subject are undoubtedly abundantly clear.  I firmly believe that everyone buys into the world view that makes the best sense of his/her world, and it would be arrogant for me to tell another person to change -- the most I can do is to present my own understanding, and hope that it will sell itself on its own merits.  And for me, the scientific model may not be perfect, but given the other options, it's the best thing the market has to offer.
*******************************
As I've mentioned before, I love a good mystery, which is why I'm drawn to periods of history where the records are skimpy and our certainty about what actually happened is tentative at best.  Of course, the most obvious example of this is our prehistory; prior to the spread of written language, something like five thousand years ago, most of what we have to go by is fossils and the remnants of human settlements.
Still, we can make some fascinating inferences about our distant ancestors.  In Lost Civilizations of the Stone Age, by Richard Rudgely, we find out about some of the more controversial ones -- that there are still traces in modern languages of the original language spoken by the earliest humans (Rudgely calls it "proto-Nostratic"), that the advent of farming and domestication of livestock actually had the effect of shortening our average healthy life span, and that the Stone Age civilizations were far more advanced than our image of "Cave Men" suggests, and had a sophisticated ability to make art, understand science, and treat illness.
None of this relies on any wild imaginings of the sort that are the specialty of Erich von Däniken, Zecharia Sitchin, and Giorgio Tsoukalos; and Rudgely is up front with what is speculative at this point, and what is still flat-out unknown.  His writing is based in archaeological hard evidence, and his conclusions about Paleolithic society are downright fascinating.
If you're curious about what it was like in our distant past, check out Lost Civilizations of the Stone Age!
[Note: if you purchase this book using the image/link below, part of the proceeds goes to support Skeptophilia!]