New from the "Well, I See No Way This Could Go Wrong, Do You?" department, we have: some researchers who have built living things from stem cells that went on to discover how to reproduce themselves in a completely novel fashion.

A team of scientists at the University of Vermont, Tufts University, and Harvard University created what they call "xenobots" -- clusters of living stem cells taken from the African clawed frog (Xenopus laevis) that were on their way to becoming skin cells, but were excised and then arrayed in spherical clusters.  These clusters began to reproduce, creating new clusters.

"Well, so what?" you may be saying.  "Cells reproduce.  It's one of the characteristics of life.  What's so weird about that?"

What I haven't told you is that the clusters (1) reproduced not by mitosis, or at least not solely by mitosis -- they reproduced by scooping up loose cells in the petri dish and assembling them into new clusters; and (2) when the scientists noticed that the original clusters usually died after reproducing, they turned a supercomputer on the problem of whether it was possible to adjust the shape of the cluster to make it better at reproducing and more likely to survive -- and the model worked.

"[W]ith an artificial intelligence program working on the Deep Green supercomputer cluster at UVM's Vermont Advanced Computing Core, an evolutionary algorithm was able to test billions of body shapes in simulation -- triangles, squares, pyramids, starfish -- to find ones that allowed the cells to be more effective at the motion-based 'kinematic' replication reported in the new research," said Sam Kriegman, lead author on the paper, which appeared in Proceedings of the National Academy of Sciences this week.  "We asked the supercomputer at UVM to figure out how to adjust the shape of the initial parents, and the AI came up with some strange designs after months of chugging away, including one that resembled Pac-Man.  It's very non-intuitive.  It looks very simple, but it's not something a human engineer would come up with.  Why one tiny mouth?  Why not five?  We sent the results to Doug [Blackiston, of Tufts University] and he built these Pac-Man-shaped parent xenobots.  Then those parents built children, who built grandchildren, who built great-grandchildren, who built great-great-grandchildren."

One of the xenobots picking up a smaller cluster of cells
The scientists say they named them "xenobots" because of the genus name of the frog species they were created from -- Xenopus -- but I don't think it's a coincidence that the root word of both, the Greek word ξενος, means "strange."
"This is profound," said study co-author Michael Levin.  "These cells have the genome of a frog, but, freed from becoming tadpoles, they use their collective intelligence, a plasticity, to do something astounding.... We were stunned that these biological objects -- a computer-designed collection of cells -- will spontaneously replicate.  We have the full, unaltered frog genome, but it gave no hint that these cells can work together on this new task, of gathering and then compressing separated cells into working self-copies."
The whole thing unfortunately brought to mind an episode of the highly scientific documentary series Kolchak: The Night Stalker called "Primal Scream," wherein some scientists brought back tissue samples from a drill site in the Arctic.  The samples, which looked like (and probably were) a tin can full of Silly Putty, were kept in cold storage until one day the cooling system failed.  This somehow spurred the tissue to spontaneously grow into a creature that looked like the love child of Ron Perlman and Sasquatch, which of course went on a rampage and killed lots of people. 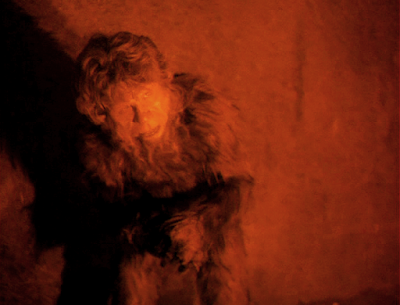 Kolchak eventually figures out that being a cave man (as it were), it would try to find caves to hide in.  Despite (1) being from the Arctic, and (2) being frozen for millions of years, the creature apparently knew all about the geography of Chicago, and figured out that there were tunnels underneath a sports stadium where it could live.  Kolchak followed it there, and after some tense moments where he bumbled around in his usual fashion, dropping his camera, gun, flashlight, hat, etc., he was able to kill the creature and save the day.
But I digress.
The researchers, for their part, don't seem worried about their creation getting loose and causing problems.  "These millimeter-sized living machines, entirely contained in a laboratory, easily extinguished, and vetted by federal, state and institutional ethics experts, are not what keep me awake at night," said study co-author Joshua Bongard.  "This is an ideal system in which to study self-replicating systems.  We have a moral imperative to understand the conditions under which we can control it, direct it, douse it, exaggerate it."
Because we've never seen movies before where the scientist says, "Stand back!  I know how to control the monster!" and promptly gets messily devoured.
In all seriousness, this does once again turn the spotlight on how we define "life."  The xenobots aren't that near the edge of the definition; they are, after all, made from living cells, not from off-the-shelf chemicals.  But given our ability to synthesize biological compounds (including DNA) pretty much to order, it may not be much longer before we see a truly artificial life-form -- something that shares no common ancestry with terrestrial life at all, and is entirely created in a laboratory.  Couple that with the last few years' awe-inspiring work in artificial intelligence, and we are truly looking at the fulfillment of the line Shakespeare gave to Miranda in The Tempest: "O, brave new world, that has such people in it!"
Even if those "people" are currently little blobs of cells, you have to wonder how long they're going to stay that way.