N.B.:  Because this post is about bad language, it contains bad language.  If you're sensitive to such things, be thou forewarned.

It's no real secret that I swear a lot.

I recall my mom trying to shame me out of using expletives when I was a teenager.  It didn't work.  Part of the problem was having a dad and a (maternal) uncle who had an amazing and creative command of swear words.  The fact of not being able to cure either her husband or her brother of swearing should have alerted her to the futility of her efforts, but it never seemed to slow her down any.

One of the things she used to say to me was the old saw, "Using that kind of language just shows you don't have the brains to find better words to use."  With the passage of years I've come to realize that despite my fondness for the f-word, there's nothing in particular wrong with my cognitive abilities.  I just find that -- used judiciously, and with an awareness of appropriate context -- it can liven things up considerably.

I thought the whole idea of swearing in fiction would make an interesting topic for this week's Fiction Friday.  In fictional settings, the "context" thing becomes even more important.  Off-color words should be reflective of the character, time, and place, and shouldn't be used to excess, but in that respect they're no different than any other stylistic feature; like humor, or violence, or sex scenes, or whatnot, it can be used skillfully or clumsily.  Overused, swear words completely lose their emotional punch (the last thing an author wants). 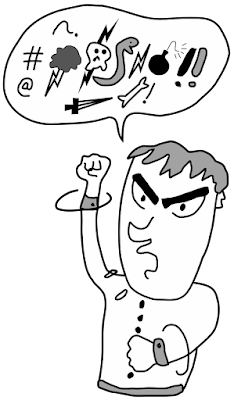 Me, I tend to use swear words in my fiction for one of two reasons; to dial up the emotional intensity, or for humorous effect.  The example of the latter that always comes to mind is the character of the Head Librarian of the Library of Timelines, Fischer (don't remind him that his first name is Archibald unless you want to face his ire), from my time-travel novel Lock & Key.  I wanted to create a character who completely messed around with the stereotype of a librarian, so I made him a long-haired twenty-something who loves 90s grunge music, and has a vocabulary for which the word "salty" is an understatement.  The repartee between him, the meek, soft-spoken main character Darren Ault, and Fischer's unflappable, ultra-competent personal assistant Maggie Carmichael, is some of the most fun I've ever had in writing.  This scene occurs just after Fischer whisks Darren back to the Library from fourteenth-century Norway, just before he was about to get chopped into mincemeat by a guy with a sword:

"God damn!" Darren screamed, and backed into a file cabinet, upsetting a precarious stack of manila folders.  The entire pile slithered to the ground, dumping its contents all over the floor and startling Ivan the tomcat, who gave an annoyed hiss and trotted out of the room, every whisker radiating disapproval.

"Good afternoon to you, too," Fischer said, from his seat behind his desk, and then looked him up and down.  "You’re filthy."

"Oh, don’t even start with me."  Darren glared at Fischer.  He was still clutching the wooden box to his chest as if it were a shield.

"Whoa, you’re a little grumpy.  Who pissed in your cornflakes?"

"I haven’t had any cornflakes.  All I’ve had is tasteless porridge, and dumplings that are like compressed tasteless porridge balls, and dried fish that has too much taste, if you get my drift, and I haven’t even had a decent cup of coffee in days, and a Norwegian guy with a sword just tried to chop my head off, and if you’re planning on getting me to change my clothes and sending me off to Kentucky without having a good night’s sleep in a real bed, then you can go fuck yourself!"

Fischer’s pale eyebrows rose.  "I don’t think I’ve heard you swear before.  I didn’t know you knew how."

Maggie appeared in the door of the office, and she looked at him, mild surprise registering in her eyes.  "Ah, Mister Ault, you have the words, but you don’t have the music.  I suggest you pay close attention to Fischer’s command of the art of the curse word.  He’s a master."  She paused.  "Would you like a cup of coffee?"

Maybe it's just me, but that scene wouldn't have been nearly as funny if I'd figured out how to write it without swear words.

An amusing aside about Lock & Key.  I was at a book signing a while back, and a woman came up and said, "I read your book Lock & Key, and I liked it, but the character of the Librarian sure does use the f-bomb a lot."

I deadpanned, "I know.  I tried to talk to him about it, and he told me to fuck off."

Well, at least I thought it was hilarious.

So like all other words in the English language, the key is in knowing how to use them.  There's no virtue in avoiding bad words in fiction just because they're bad.  In fact, sometimes not using them is the worse choice.  I know a guy who wrote an (otherwise wonderful) novel about military men in the 1940s, and he is such a prude that he made all of them have squeaky-clean vocabularies -- and there was no mention of sex.  Ever.  The story's good, but the characters come across as artificially sanitized, so the whole thing feels a little off.

As I said earlier, use the vocabulary that is appropriate to that time, place, and character.  Salty language is like actual salt; don't go overboard with it, but used sparingly, it can really improve the flavor of a story.