You may recall that a few days ago, I posted about a company that sells beanies and boxer briefs designed to protect you from the supposed ill effects of 5G, and electromagnetic fields in general.  The upshot of my post was that the low-level EMFs we're exposed to in the ordinary course of things have never been shown to cause harm, so at best such purchases are a waste of money that could be more productively used for other purposes, which in my opinion includes using it to start a campfire.

I choose the words "at best" deliberately, because in one of those weird synchronicities that happen sometimes, I ran into an article just yesterday on the BBC News that said there's another reason to avoid these products.  You ready?

It's because some of them are...

My reaction upon reading this was, and I quote:

I mean, you can't make this stuff up.  The Dutch Authority for Nuclear Safety and Radiation Protection found that nine products from a company called EnergyArmor -- all of which allegedly protect you from the dangers of 5G and electromagnetic radiation -- themselves give off enough ionizing radiation that the agency recommended owners stop wearing them immediately, put them aside (preferably in the original packaging and away from close proximity to people and pets), and call the company to ask for a refund.

This includes the amusingly-named Quantum Pendant™, which you can tell is extremely quantum because it says "Quantum Pendant" about eighty times on the box. 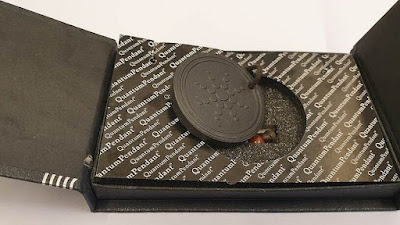 Why this pendant is any more quantum than anything else, given that all matter -- including dogs, avocados, umbrellas, cow shit, and Mitch McConnell -- is made up of the same set of subatomic particles that obey the same rules of quantum physics, is never explained.  My guess is they have no idea themselves.  The original claim ("low-level EMFs are harmful") has nothing to do with science, and as I've remarked before, it's very hard to logic your way out of a belief you didn't logic your way into.
Also, in this case, the fact that lots of gullible people are willing to hand over their hard-earned cash for this nonsense is a hell of an incentive to make it sound sophisticated.

So the purported health benefits of anti-5G-wear is offset fairly dramatically by the (real) hazard of wearing something radioactive against your skin.  Sad to say, but we appear as a species not to have progressed very far from when Marie and Pierre Curie and Henri Becquerel discovered radioactivity, and found that radium salts glowed in the dark, from which people immediately concluded that these were soothing healing rays that could be used to treat damn near everything, and this includes a guy who (I am not making this up) fixed a radium-infused gizmo onto a jock strap, presumably to jazz up his sex life.

That, of course, was over a hundred years ago, and science has learned a lot since then.  Unfortunately -- and this is the sad part -- people in general apparently haven't.  There are still folks who prefer to believe foolishness over evidence-based research.  As my dad used to say, you can fix ignorant, but you can't fix stupid.

But the timing of the product recall in the Netherlands was just too wonderful not to comment upon.  And maybe this will wake a few people up.  I'm not really holding out that much hope, though.  The 5G-blocking-stuff manufacturers will probably just put the Dutch Authority for Nuclear Safety and Radiation Protection on their (long) list of groups that are in on the conspiracy, joining the World Health Organization, the Center for Disease Control, and the National Institute of Health.  I'm probably in there somewhere, too, most likely on their "shill" list.  Which, by the way. makes me wonder where the hell my Shill Check™ is.  You'd think that all of my scorn would earn me something.

Maybe it was delayed in the mail.  The Post Office is probably on to the conspiracy and is preventing us shills from getting paid.  You know how it goes.