Illustrating the general principle that there is no idea so stupid that you can't change it so as to make it way stupider, today we springboard off yesterday's post, which was about some alleged 5G-blocking wearable items that actually turned out to be radioactive, and look at another twist on this claim that moves it from "dumb mistake" into "outright fraud."

I owe both today's and yesterday's post to the same alert reader, my friend and fellow writer Vivienne Tuffnell, of the lovely blog Zen and the Art of Tightrope Walking (which you should all subscribe to -- and while you're at it, check out her fiction links, because her books are wonderful).  Viv's lately contribution to the ongoing diminishment of my opinion of the general intelligence of the human race comes from Ars Technica, where we read about yet another gizmo that's suppose to block the evil 5G-rays from infiltrating your brain.  This one is a gadget that plugs into a standard USB port, and costs £283, on the order of $350.  It's called the "5G BioShield," and according to the manufacturer's website, "is the result of the most advanced technology currently available for balancing and prevention of the devastating effects caused by non-natural electric waves, particularly (but not limited to) 5G, for all biological life forms."  The 5G BioShield provides "protection for your home and family, thanks to the wearable holographic nano-layer catalyser, which can be worn or placed near to a smartphone or any other electrical, radiation or EMF emitting device."

Best of all, you don't even have to plug it in for it to work.  Just set it on your desk, and presto.  "The 5GBioShield makes it possible, thanks to a uniquely applied process of quantum nano-layer technology, to balance the imbalanced electric oscillations arising from all electric fog induced by all devices such as: laptops, cordless phones, wlan, tablets, etc... [bringing] balance into the field at the atomic and cellular level restoring balanced effects to all harmful (ionized and non-ionized) radiation...  [it] transmutes the signals and harmonizes all harmful frequencies into life affirming frequencies."

It's always on, they say, thanks to the "quantum nano-layer technology."

All of which, of course, is just stringing together ten-dollar words into a paragraph of meaningless sci-babble.  There's no such thing as an "imbalanced electrical oscillation," nor are there some sort of magical "life-affirming frequencies."  As such, what we have here is the usual fancy-sounding nonsense to sell something to people who evidently never took high school physics.

But what sets this apart from the previous claims is that the folks at Ars Technica actually forked over $350 to see what the thing actually was, and when they took it apart, they found out the "5G BioShield" is actually... 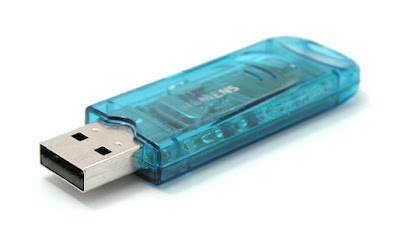 [Image is in the Public Domain]
The people at Pen Test Partners, who did the actual analysis, said, "the 5G BioShield is nothing more than a £5 USB key with a sticker on it...  Whether or not the sticker provides £300 worth of quantum holographic catalyzer technology we'll leave you to decide."
Thanks, I've decided, mostly because "quantum holographic catalyzer technology" is about as real as "spectrum polarity unicorn repellent."
See, I can string together big words, too!
The company that sells the 5G BioShield are, of course, admitting nothing.  Their response to the Pen Test Partners analysis basically implied that they were too stupid to understand what they had in their hands.  "It is... hard to take your evaluation seriously, since you have evidently not researched the background facts in any meaningful way," a company spokesperson said.
And, of course, the controversy brought an outpouring of testimonials from people who'd tried the 5G BioShield and found that it worked, making them "feel calmer" and "have better dreams."  (Cf. "the placebo effect.")
I'd like to think this will be the end of this nonsense, but of course it won't be.  The Ars Technica article said that the latest from the anti-5G people is a claim that cellular technology is being used to spread COVID, illustrating that they not only have no idea how physics works, they also have no idea how biology works.  But blatant stupidity didn't stop these wackos from damaging cell towers, because evidently this makes better sense to them than getting vaccinated and wearing a fucking mask.
I mean, really.
Anyhow, I can only hope this will be the last time I have to deal with this here at Skeptophilia, allowing me to get back to more pressing matters.  Like actually developing Spectrum Polarity Unicorn Repellent.  A big seller, that could be.  The beta test has proven highly effective.  I sprayed some all over my home and I haven't seen a unicorn yet.