The moth and the flower

Ever heard of an evolutionary arms race?

It's a twist on coevolution, where the adaptations in one species affect the selection -- and therefore the evolution -- of another, unrelated species.  In arms races, as the name implies, it's specifically about biological weaponry, either for predation or for self-defense.  Finding lunch, or avoiding being lunch.  The most commonly-cited example of an arms race is speed and maneuverability in the cheetah and the impala.  The fastest cheetahs take down and eat the slowest impalas; the fastest impalas escape, and the slowest cheetahs starve.  (That's an oversimplification, but it'll do for now.)  The upshot is that over time, both the cheetah and the impala evolve the ability to run faster.  The most common outcome of arms races is that it continues until one of the species kind of maxes out on how far it can take the adaptation.  The cheetah might well be at that point; it's hard to imagine how they could be any faster without the strain on the joints, tendons, and muscles causing serious injury.

The odd thing about an arms race, though, is that sometimes it can backfire on one of the participants.  A relationship like this was the subject of a paper last week in the journal Alpine Entomology, which looked at a beautiful -- but highly poisonous -- plant, the alpine rose.

The alpine rose isn't a rose at all; it's a species of rhododendron (Rhododendron ferrugineum) that lives in a habitat not much else can tolerate.  It thrives only in rocky, acidic soils, just above the tree line in the Alps, Jura, Pyrenees, and Apennines.  Besides the obvious difficulties of living in a cold, windswept place, there's the issue that in such barren areas, any animals are going to find survival as tough as the plants do, so the local herbivores are going to eat pretty much anything green.  The alpine rose has responded by evolving a nasty cocktail of toxins, including the glycoside arbutin and the alkaloid arecoline, so even the hungriest of plant-eaters leave it alone. 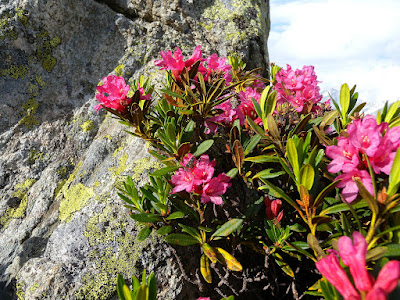 Well, most plant-eaters.  The current paper is about the discovery of a population of moths that have evolved to specialize on this plant.  It's the danger of an arms race; if one of the participants can exploit the adaptations of the other, it can actually end up better off.  Here, the moth has evolved tolerance to the alpine rose's toxins, and the result is it has a food source essentially to itself, with no competition.

The more the researchers looked into it, the more interesting the story got.  Not only had these moths evolved to specialize on eating alpine rose leaves, upon undergoing genetic analysis, they were shown to be conspecific with the species Lyonetia ledi, the Ledum leaf-miner moth.  This is a widespread species of moth that feeds mostly on the leaves of Labrador tea (Ledum palustre) and bog myrtle (Myrica gale).  This, however, left two puzzles: (1) most Ledum leaf-miners won't eat alpine rose; and (2) the nearest population of Ledum leaf-miners is over four hundred kilometers away.

What seems to have happened is that the moth, which feeds on plants that live in boggy areas at high altitude, was once more common -- during the last glacial period, when the favorable habitat was pretty much everywhere in Europe that wasn't actually covered in ice.  Then as things warmed up, the valleys became too warm for its host plants, and the range of both the plants and the moths moved upward in altitude, and broke up into patches.  One of them got isolated in the mountains of western Europe, where the alpine rose was way more common than either of the usual host plants for the species.  This created enormous selective pressure; as soon as there were moths that could at least tolerate the alpine rose's toxins, they were at such an advantage that they outcompeted their cousins and more or less took over.  Over time, this preference for alpine rose became a requirement.  Now, the moth feeds only on alpine rose -- something no other insect species can manage.

So that's today's cool science story; a poisonous flower and a relict population of moths stranded in the high mountains after the last glaciation.  Once again illustrating what Darwin meant by saying that evolution had created "many forms most beautiful and most wonderful" -- some of which are still out there waiting to be discovered.