Voices from the jungle

When I was a teenager, I was fascinated with the Mayans.  The history and culture -- what we knew of it at the time -- was fascinating enough, but I think what really captured me was the unique way the language was written.

At that time, very little of the writing had been successfully deciphered, and much of what had been was tentative at best.  In fact, for some time the task was that most daunting of linguistic puzzles; an unknown script coding for unknown sounds in an unknown language.  The surmise that the glyphs primarily represented not just a single language, but two -- the extinct Ch'otli' language and the extant Yucatec language -- didn't help matters.  Complicating things further was the fact that it turns out that similar to Japanese hiragana and kanji, some of the glyphs represent syllables and others represent entire words.  The team effort to completely decipher Mayan glyphs took well over a hundred years, culminating in a paper in 1986 that allowed just about every classic Mayan inscription to be read.

The most daunting thing is that the patterns connecting spelling to pronunciation were convoluted.  Some words had "echo vowels" -- vowels repeated from the previous syllable when written, but not pronounced (e.g. yop, leaf, written using the syllables yo-po).  Other written-but-not-pronounced vowels were "disharmonic" -- not the same as the preceding syllable -- and the rules governing which syllabic glyph to use are abstruse to say the least.  (Of course, in reality, the Mayans have nothing on English for bizarre spelling-to-pronunciation correspondences; consider how -ough is pronounced in the words rough, through, thorough, ought, drought, and hiccough.  I even have an idea of why that mess happened historically, and I still think it's ridiculous.) 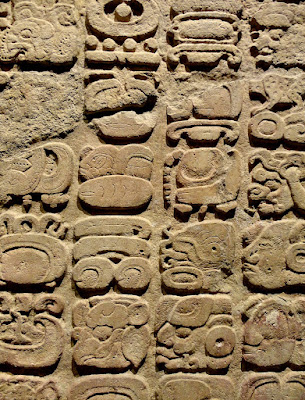 And, of course, the main difficulty was the paucity of examples of the script, mostly due to the Spanish, who came in during the sixteenth and seventeenth centuries and proceeded to destroy as many of the heathen inscriptions they could get their hands on.  People like Diego de Landa, bishop of the Yucatán in the late sixteenth century, burned just about all the Mayan codices, and his belated efforts to preserve what was known about the script and the languages they represented were half-hearted at best.  Even so, historian and linguist William Gates -- in what has to be preserved forever in the annals of chutzpah -- said, "ninety-nine percent of what we today know of the Mayas, we know as the result either of what Landa has told us... or have learned in the use and study of what he told."

It's heartening, though, that five hundred years later, we find remnants of that lost civilization.  (There are still people who speak Mayan languages today, but it's undeniable the Spanish pretty well obliterated the culture of an entire people.)  Just last week, it was announced that some explorers trying to map out caves in the Yucatán stumbled upon three pieces of pottery dating back to the Late Postclassic Period (1200-1550 C.E.).  One of them was in fragments -- crushed when it was caught in between growing tree roots -- but the other two are in remarkably good condition.  The Mayans had a positive fascination for caves, and thought (like many early civilizations) that they represented the entrance to the underworld, a place called Xibalba (literally, "place of fright").  Just as the Greeks did at the cave of the Delphic Oracle, the Mayans brought offerings and sacrifices into caves to appease the gods and spirits of the nether world, and it's thought these three vessels were probably examples of those ritual gifts.

Even by comparison to other cultures' ideas about the horrors of the afterlife, Xibalba is impressively awful.  The lords of Xibalba seemed to enjoy causing pain and humiliation, and sent human spirits after death into a series of tests in various "houses" -- Dark House (completely pitch black, as you might have guessed), Rattling House (ice cold, with pounding hailstorms), Jaguar House (guess what lived there, and were dreadfully hungry), Bat House (ditto), Razor House (filled with blades that moved around on their own), and Hot House (which was on fire).  Just the names of the gods of Xibalba would be enough to dissuade me from ever going there (not, I suppose, that you had a choice).  There were:

Which definitely makes me wonder who spent their time making this shit up.  I mean, if you're gonna come up with wild tales, at least leave out the sentient razor blades and pus demons.
So it's a fascinating culture, but one I'm rather glad I don't belong to.  The Judeo-Christian hell I had to contend with when I was a kid growing up in the Catholic Church was bad enough.
Be that as it may, it's pretty cool that Diego de Landa and his ilk didn't silence all of these distant voices from the jungle.  I've been lucky enough to visit that part of the world twice, and the pyramids and stone temples they left behind are awe-inspiring.  Perhaps there are still more relics out there in the rain forest waiting to be discovered -- and which will give us another lens into a vanished civilization.
*****************************************
I've mentioned before how fascinated I am with the parts of history that still are largely mysterious -- the top of the list being the European Dark Ages, between the fall of Rome and the re-consolidation of central government under people like Charlemagne and Alfred the Great.  Not all that much was being written down in the interim, and much of the history we have comes from much later (such as History of the Kings of Britain, by Geoffrey of Monmouth, chronicling the events of the fourth through the eighth centuries C.E. -- but written in the twelfth century).
"Dark Ages," though, may be an unfair appellation, according to the new book Matthew Gabriele and David Perry called The Bright Ages: A New History of Medieval Europe.  Gabriele and Perry look at what is known of those years, and their contention is that it wasn't the savage, ignorant hotbed of backwards superstition many of us picture, but a rich and complex world, including the majesty of Byzantium, the beauty and scientific advancements of Moorish Spain, and the artistic genius of the master illuminators found in just about every Christian abbey in Europe.
It's an interesting perspective.  It certainly doesn't settle all the questions; we're still relying on a paucity of actual records, and the ones we have (Geoffrey's work being a case in point) sometimes being as full of legends, myths, and folk tales as they are of actual history.  But The Bright Ages goes a long way toward dispelling the sense that medieval Europe was seven hundred years of nothing but human misery.  It's a fascinating look at humanity's distant, and shadowed, past.
[Note: if you purchase this book using the image/link below, part of the proceeds goes to support Skeptophilia!]