Being a skeptic and a scientist does not mean you are immune to the emotional side of life.

Well, at least I'm not.  It may well be that I was attracted to science as an antidote for the fact that I'm the kind of person who, under the least provocation, will get pretty overwrought about things.  Science seemed like an escape from having emotion swing me around by the tail all the time.

Still... there are times when my reaction even to a science story is more emotional than it is cerebral.  Consider, for example, the link my friend and fellow writer Andrew Butters (of the wonderful blog Potato Chip Math) sent me yesterday, which says that... scientists have created the first ever warp bubble.

My skeptical brain immediately gave it the wry eyebrow and said, "Well, maybe.  How many times have we had our hopes dashed before?".  On the other hand, my emotional brain started jumping up and down making excited little squeaking noises.  It's been my dearest wish since I was a kid either to have aliens visit (as long as they're not Daleks, Cybermen, Sontarans, or the Vashta Nerada), or to have practical interstellar flight and go there myself.  And ever since Mexican physicist Miguel Alcubierre showed back in 1994 that faster-than-light warp drive was at least theoretically possible, I've been desperately hoping that it would eventually become feasible as well.

Science adepts amongst my readership might be thinking, "Wait a second.  Doesn't the General Theory of Relativity forbid FTL travel outright?"  The answer, of course, is yes, but Alcubierre seems to have found a loophole; that you won't break the relativistic speed limit if the way you do it is by curving space behind and in front of you, creating a stretch in the fabric of space-time, and then riding that curve in much the way that a surfer rides a big wave.  (I know, it's way more complicated than that, but I'm not going to go into deeper details for the very good reason that the mathematics in the original paper loses me after the first paragraph.)

In any case, "theoretically possible" and "actually feasible" are two very different things, and the first analysis of Alcubierre's proposal found that it's completely impractical because it would take a phenomenal amount of energy to create the curvature needed.  It's a little like Archimedes's boast, "Give me a long enough lever and a place to stand, and I could move the world."  Well, okay, Archie, but (1) that's a really fucking long lever, and (2) there is no place to stand.

(N.B.: Yes, I know Archimedes was just trying to make a point about the usefulness of levers.  It applies just as well to issues of feasibility.  If he can use the example, so can I.)

Anyhow, all the "yes, buts" seemed to put Alcubierre's idea on the shelf -- until ten years later, when physicist Harold White reworked Alcubierre's equations and showed a way to accomplish warping space with far less energy.  Even so, the theory of creating a warp bubble seemed very far removed from practical application.  But now...

*brief pause to stop jumping up and down and squeaking* 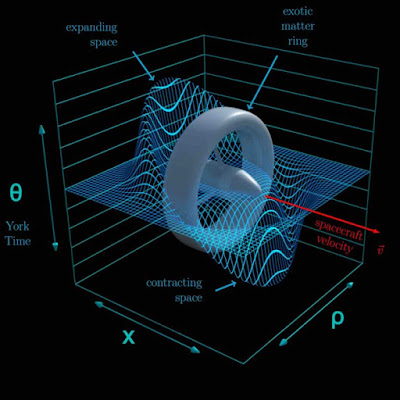 Working at the labs of Limitless Space Institute, White announced this week that he'd created a small, transient warp bubble that met the criteria laid out in his theoretical paper from fifteen years ago.  White said, "Our detailed numerical analysis of our custom Casimir cavities [a microscale structure in which the warp bubble supposedly occurred] helped us identify a real and manufacturable nano/microstructure that is predicted to generate a negative vacuum energy density such that it would manifest a real nanoscale warp bubble, not an analog, but the real thing."

He cautioned that this was only a first-step proof-of-concept, that it didn't mean we'd be zooming off to Alpha Centauri day after tomorrow.  However, he said his experimental findings lined up so well with the theoretical predictions that it was impossible not to consider this a fantastic breakthrough.  "This is a potential structure we can propose to the community that one could build that will generate a negative vacuum energy density distribution that is very similar to what’s required for an Alcubierre space warp," White said.  "It is early to ask questions about some type of actual flight experiment.  In my mind, step one is to just explore the underlying science at the nano/micro scale.  Crawl, walk, run."

I just hope the "crawl" and "walk" stages move along, because dammit, I want to see this happen.  I'm 61, so at this point (unless we also get some serious life-lengthening strategies soon) I've got maybe thirty more years, forty if I'm really lucky and take after my Great-Aunt Clara, who lived to be 101.  I've been waiting for this ever since I was seven and first heard Captain Kirk say, "Warp six, Mr. Sulu!"

I'm trying my best not to get too worked up about it.  These things have a way of running into serious snags.  It's a little like the person who quipped, "Artificial intelligence is five years in the future, and always will be."  Even so, reading this was a rush.  Maybe it will come to naught; that's certainly happened before.  But maybe... just maybe... we've finally met the real Zefram Cochrane.