You know, I am freakin' well fed up with paranormal shit happening when I'm not around.

And you have to wonder where they migrate to.  Do they head down to the Keys for the winter, or something?  Heaven knows I would, if I were living outdoors in upstate New York.  But if so, you'd think someone would see them.  A pod of migrating Sasquatches walking down the median of I-95 would be a little hard to miss.

Be that as it may, I've been to Connecticut Hill many times.  In fact, for a while I did landscaping for a really nice lady with an enormous yard and about 438 flower gardens, and my route to get there took me right over the top of Connecticut Hill.  And how many monsters did I see, in all that time?

This is adding insult to injury, because I lived in the supposedly Bigfoot-infested Pacific Northwest for ten years, and basically used to spend all summer backcountry camping in the Cascades and Olympics.  Once again, no luck.

Then, there's ghosts.  I grew up in southern Louisiana, surely an atmospheric place if there ever was one.   My grandma lived in a rambling old house surrounded by enormous, Spanish-moss-festooned live oaks, and during the year and a half I lived in the bedroom in her attic, I never saw anything scarier than cobwebs.  (C'mon -- an impressionable nine-year-old boy moves into his grandmother's dusty, creaky-floored attic?  If I'd been a character in one of my own books, I'd have been visited by the ghosts on day one.)

I even went to places that have long-standing reputations for being haunted, such as Oak Alley Plantation, in Vacherie, Louisiana, not far from where my mom was born.  Nothing. 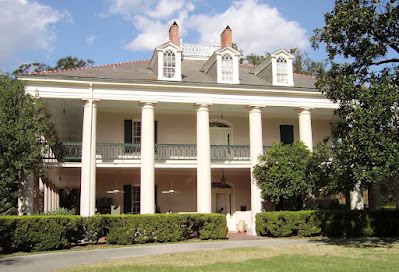 So it's not like I haven't been trying.  Three years ago I got to tour the Crescent Hotel, in Eureka Springs, Arkansas, which is said to be "the most haunted place in the state."  I figured, given my lack of success in the past, it made sense to start from the top of the list.  I did have a moment's uncertainty when I walked by two women in 1920s garb sitting on a bench.  After I passed them, I said to a friend, "Please tell me you saw those women."

She saw them just fine.  Turns out they were tour guides.

So not much luck there, either.  I did, however, get a photograph of a hallway, which -- if you squint at it just right -- shows a pair of spots that look a little like eyes, about a third of the way up from the bottom. 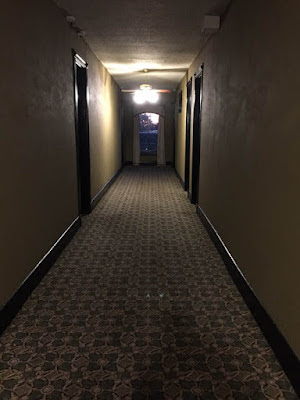 But other than that, nada.  My friend (the one who, fortunately, also saw the women in period dress) said she's had scary and inexplicable experiences in the Crescent, but the ghosts must have all been on holiday when I was there.
I even wrote a couple of years ago about investigating a local underpass where people had supposedly seen a creepy face in the shadows.  All I found was some weird graffiti and a stoned guy who was seriously impressed when I told him I was a paranormal researcher, but no creepy faces.

The latest example of right place, wrong time I found out about just yesterday.  In November Carol and I drove down to the Outer Banks of North Carolina to meet up with some friends who live in Florida (so the place was chosen to split the difference).  Off season, so it was quiet, there were cheaper rates, and much less traffic.  Five days going out on long sandy beaches for early-morning runs, enjoying fresh seafood, lots of down time, and beautiful views of the ocean.  Once again, though, everything was perfectly ordinary while we were there.  Nice, but ordinary.

Well, an article in the Raleigh News & Observer says that just last week, there were UFOs spotted off Nag's Head.  U-F-fucking-Os, and once again, I missed them.  These were apparently pretty eye-opening, too; they left red trails in the sky that lasted over ten minutes and were seen by hundreds of people.  Here's a photograph: 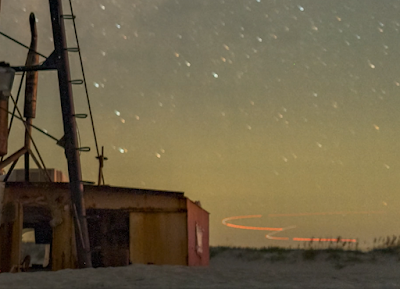 The skeptics say the UFOs were probably military aircraft, although one of the people who photographed the trails, Wes Snyder, said, "I’ve caught thousands of plane trails and never have any of them looked like this, so I’m certain they are not your typical aircraft.  I’ve caught these trails before in several other time lapses, but I have yet to figure out what kind of plane possibly has these capabilities. ...  Whatever they are, they have some incredible maneuverability."

Well, all I can say is, I am sick unto death of always being left out.  You'd think the aliens, ghosts, cryptids, and whatnot would seek out people like me, because we scoffers would be awfully fun to surprise.  But no.  I've actually been out looking for weird stuff, pretty much my whole life, and found zip.

A little off-putting, that.

So anyhow, I'm issuing a challenge to any paranormal ghosties and ghoulies and assorted hangers-on.  Here I am!  Come and get me.  I live in a big old house out in the middle of nowhere.  I'm home alone most of the time, unless you count the dogs, which you probably shouldn't, because (and I mean this with all due love and affection) Guinness the Fearsome Pit Bull is actually a giant wuss who is terrified of anything bigger than a woodchuck, and the jury's still out on whether Cleo actually has a brain.  So they're sweet and cuddly and wonderful, but as protectors of house and home, they're kind of non-starters.

So like I said: I'm a sitting duck.  Totally defenseless, and honestly, kind of a big chicken.  When it comes to self-defense, my most outstanding skill is that I can run away really fast.

Any ghosts or cryptids or whatever want to take the bait?  *drums fingers on table*  I'm waiting.