A hole in the ground

In the Doctor Who episode "The Hungry Earth," a scientist named Nasreen Chaudhry is trying to break the previous record for deep drilling into the Earth, ostensibly to find the source of some minerals that seem to occur nowhere else, but also because "let's see if we can actually do it."  The team running the drill is trying to send it down 21 kilometers, and it just about reaches the target depth when...
It suddenly shuts down.  The reason, it turns out, is that it is endangering an underground colony of hibernating Silurians, the reptilian race that used to be Earth's dominant species, and some of them were automatically awakened when the threat was detected, and proceeded to sabotage the drill -- and head up to the surface to destroy the humans who had created it.  The resulting conflict is anything but a quick good-guy-vs.-bad-guy story.  It explores all sorts of uncomfortable topics like xenophobia, fanaticism, righteous and unrighteous anger, revenge, and how hard it can be to trust when you don't know what the other person's motives are.  Some of the Silurians come out looking pretty awful -- but then, so do some of the humans. 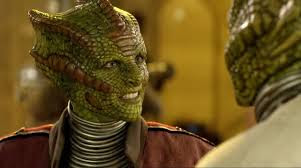 I couldn't help but think about this episode when a friend of mine, the wonderful writer and blogger Andrew Butters (of Potato Chip Math, which you all should subscribe to right now) sent me a link to an article in Vice describing a project that is doing the exact same thing.
The company is called Quaise Energy, and at least is doing it for sound reasons.  The borehole, which is projected to be almost twenty kilometers long when it's completed, beats the previous record (twelve kilometers) by a large margin).  The idea is that down that deep, the rock is being heated by the mantle, and it would be a nearly limitless supply of geothermal energy -- literally, just pump water down pipes inside the borehole, and the return pipes will bring up steam that can then be used to generate electricity.  (They already do this, on a much smaller scale, in Iceland; the boreholes can be far shallower there, because the island sits right on top of the Mid-Atlantic Rift Zone, and is one of the most volcanically active places in the world; in some places, all you have to do is dig down a few inches and the soil is hot to the touch.)
At twenty kilometers down, the ambient bedrock temperature is about 500 C, so there's no question that the energy is there.  Getting down that far, however, is no mean feat; they're using collimated lasers called gyrotrons, which can burn through rock, so unlike the unfortunate drill team in Doctor Who, there's less machinery to get jammed up, or sabotaged by lizard people from the dawn of time, or whatever.
The nice thing about this is that it's about as close to zero carbon footprint as you can get.  "This funding round brings us closer to providing clean, renewable baseload energy," said Carlos Araque, CEO and co-founder of Quaise Energy.  "Our technology allows us to access energy anywhere in the world, at a scale far greater than wind and solar, enabling future generations to thrive in a world powered with abundant clean energy."
All of that sounds great, and it's nice to see people putting time, energy, and money into ways to unhook us further from fossil fuels.  And fortunately, there probably are no Silurians down there, so the overall risk is fairly low.  The hope is that when they get proof-of-concept from the first borehole, it might be an incentive to place them elsewhere.  The best thing about geothermal is not only that it's effectively limitless, but once you get the pipes and pumps in place, it needs very little maintenance, and no additional expense for fuel; some of the electricity produced by the steam can be siphoned off to run the pumps, and the rest of it is essentially free energy.
So I'm all for it, and I hope the project proceeds quickly, because heaven knows we need better and cleaner energy sources.  I'd love it if there was geothermal here where I live -- because in this region our electricity is mostly from coal, and our house is heated with fuel oil (supplemented considerably, I have to add, by our solar panels.)  On the other hand, if a super angry reptilian military leader suddenly bursts out of the borehole and starts killing people who get in her way, I'm gonna be right the hell out of here.