When I was an undergraduate at the University of Louisiana, I took a class called Introduction to Astronomy from a fellow named Daniel Whitmire.  Dr. Whitmire made a name for himself, along with a colleague named John Matese (whom I later took a class in Quantum Mechanics from), with something that's been nicknamed the "Planet X" hypothesis.  This isn't some crazy, Nibiru-is-headed-toward-Earth claim; Whitmire and Matese were looking at an apparent periodicity in mass extinctions, which they suggested could be the effects of a massive planet far beyond the orbit of Pluto, perhaps with an eccentric orbit, which every so often passes through a dense part of the Oort Cloud and sends comets and other debris hurtling in toward the inner Solar System.
Since the time I first heard about it (in around 1980), the Planet X hypothesis has lost currency.  There's been no evidence whatsoever of a massive planet outside the orbit of Pluto, and in any case, further study has indicated that the extinctions (1) don't really show that strong a periodicity, and (2) have been pretty well explained from phenomena other than collisions (other than, obviously, the Cretaceous-Tertiary extinction). 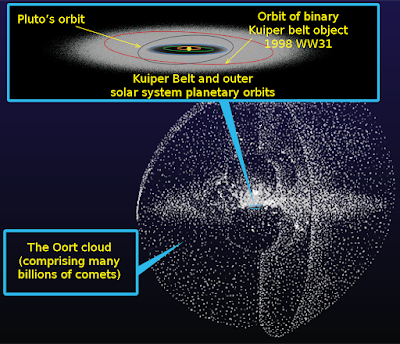 [Image is in the Public Domain courtesy of NASA]
I found out last week, though, that Whitmire and Matese may have been on to something after all.
A curious paper that recently appeared in Geoscience Frontiers suggests that focusing solely on the extinctions may have hidden an underlying periodicity.  In "A Pulse of the Earth: A 27.5-Myr [million year] underlying cycle in coordinated geological events over the last 260 Myr," Michael Rampino and Yuhong Zhu (of New York University) and Ken Caldeira (of the Carnegie Institution for Science) did some detailed statistical analysis (the mathematics of which is beyond me) on 89 different major geological events on Earth -- marine and non-marine extinctions, major ocean-anoxic events, continental flood-basalt eruptions, sea-level fluctuations, global pulses of intraplate magmatism -- and found that there are striking, 27.5 million year peaks that have yet to be explained.
What jumped out at me is that the analysis isn't just some vague, it-looks-like-it-might-be-a-pattern.  The software they used found that the periodicity has a 96% confidence -- i.e. there's only a 4% chance that it's just noise that happens to look like a rhythm.  This means that they're on to something.  What, exactly, they're on to remains to be seen; the natural inclination is to look for some kind of tectonic process that for some reason is on a really slow cycle, but they did note one other curious possibility:

On the other hand, the main period of about 30 Myr is close to the Solar System’s ~ 32 ± 3 Myr vertical oscillation about the mid-plane of the Galaxy.  In the Galactic plane region, increased cosmic-ray flux might lead to significant climatic changes, whereas encounters with concentrations of disk-dark matter might trigger comet showers from the Oort Cloud, as well as thermal and geophysical disturbances in the inner Earth.  We note that a 26 to 37 Myr cycle has been reported in the ages of terrestrial impact craters, using various statistical techniques and sets of crater ages potentially connecting the terrestrial and extraterrestrial cycles.

Of course, figuring out the mechanism that causes the pattern comes after establishing that the pattern itself is real.  As I pointed out in my post on the Ganzfeld Experiment a couple of weeks ago, developing a model to explain a phenomenon has to wait until you've shown that there's a phenomenon there to explain.

But a 96% confidence level is enough to indicate that there's some underlying mechanism at work here that's worth further study.  Something, apparently, is causing a strange, regular pulse of catastrophes.  (To put your minds at ease -- I know this was one of the first things I wondered -- the last peak the analysis found occurred 12.1 million years ago, so we've got another fifteen-odd million years to go before the next one.  That is, if we don't manufacture a cataclysm ourselves first.)

For now, all we have is an odd, unexplained pattern in geological upheavals.  It will be fascinating to see what refinements are put on the analysis -- and whether the scientists can find out what's actually going on.  Until then, we're left with a mystery -- a 27.5 million year terrestrial heartbeat.