Astrophysicist Neil deGrasse Tyson said (apropos of UFO sightings), "The human brain and perceptual systems are rife with ways of getting it wrong."

It might be humbling, but it's nothing short of the plain truth, and doesn't just apply to seeing alien spaceships.  Especially in perfectly ordinary situations, we like to think that what we're hearing and seeing is an accurate reflection of what's actually out there, but the fact is we not only miss entirely a significant fraction of what we're experiencing, we misinterpret a good chunk of the rest.

Think you're immune?  Watch the following two-minute video, and see if you can figure out who killed Lord Smythe.

I don't know about you, but I didn't do so well.

It turns out that we don't just miss things that are there, we sometimes see things that aren't there.  Take, for example, the research that appeared last week in the journal Psychological Science, that suggests we make guesses about what we're going to see, and if those guesses don't line up with what actually happens, we "see" what we thought we were going to see rather than reality.

The experiment was simple enough.  It uses a short video of three squares (call them A, B, and C, from left to right).  Square A starts to move quickly to the right, and "collides" with B, which starts to move.  As you track it across the screen, it looks like B is going to collide with C, and repeat what happened in the previous collision.

The problem is, square C starts to move not only before B hits it, but before B itself starts moving.  In other words, there is no way a collision with B could have been what triggered C to start moving.  But when test subjects were asked what order the squares started moving, just about everyone said A, then B, then C.  Our expectation of cause-and-effect are so strong that even on multiple viewings, test subjects still didn't see C begin to move before B.

"We have a strong assumption that we know, through direct perception, the order in which events happen around us," said study co-author Christos Bechlivanidis, of University College London.  "The order of events in the world is the order of our perceptions.  The visual signal of the glass shattering follows the signal of the glass hitting the ground, and that is taken as irrefutable evidence that this is indeed how the events occurred.  Our research points to the opposite direction, namely, that it is causal perceptions or expectations that tell us in what order things happen.  If I believe that the impact is necessary for the glass to break, I perceive the shattering after the impact, even if due to some crazy coincidence, the events followed a different order.  In other words, it appears that, especially in short timescales, it is causation that tells us the time."

As I and many others have pointed out about previous research into what is now known as "inattentional blindness," this is yet another nail in the coffin of eyewitness testimony as the gold standard of evidence in the court of law.  We still rely on "I saw it with my own eyes!" as the touchstone for the truth, even though experiment after experiment has shown how unreliable our sensory-perceptive systems are.  Add to that how plastic our memories are, and it's a travesty that people's fates are decided by juries based upon eyewitness accounts of what happened, sometimes in the distant past. 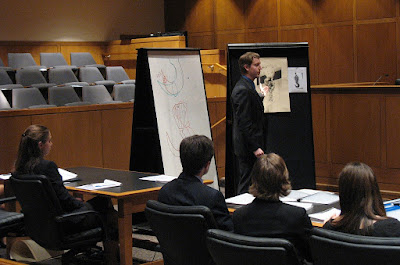