Fox on the run

Seems like for each of the last few years, we've said, "Well, at least next year can't be as bad as this year was!"  Then, somehow, it is.  Or worse.  As a friend of mine put it, "I'd like to find out who started this worldwide game of Jumanji and punch the shit out of him."

And of course, with so many things going wrong, people start casting about for some kind of underlying cause (other than "humans sure can be assholes sometimes").  I wasn't surprised, for example, that the extremely Reverend Pat Robertson said the invasion of Ukraine by Russia was a sign that the End Times were beginning.

Well, "not surprised" isn't exactly accurate, because I honestly thought Pat Robertson was dead.  What is he, like 124 years old?  In any case, once I realized that he's still alive, his reaction wasn't surprising, because he thinks everything is a sign of the End Times.  I have this mental image of him shuffling around his house in his bathrobe and jamming his little toe on the leg of the coffee table, and shouting, "And the Lord sayeth, 'When thou bangest thy toe on the furniture, prepare ye well, for the Four Horsemen are on their way!  Can I get an amen?" 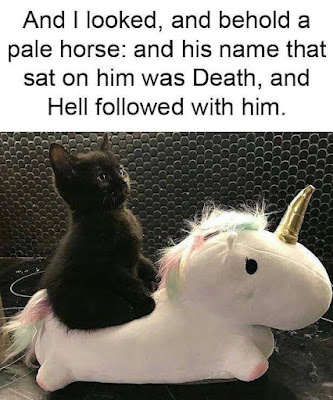 So I suppose it's natural enough to look for a reason when things start going wrong, even though in my opinion, Pat Robertson is nuttier than squirrel shit.  But in any case, now we have another candidate for an explanation besides the End Times as predicted in the Book of Revelation:

The Japanese Killing Stone spontaneously split in half last week.

If you haven't heard of the Japanese Killing Stone, well, neither had I until I read that it had fallen apart.  Its Japanese name is Sessho-seki (which literally means "killing stone"), and it's near the town of Nasu, Tochigi Prefecture, in central Honshu.  The story is that there was a beautiful woman named Tamamo-no-Mae, who was actually a kitsune (an nine-tailed fox spirit) in disguise.  She was working for an evil daimyo (feudal lord) who was trying to overthrow the Emperor Konoe, but she was exposed as a fox spirit and killed by the warrior Miura-no-Suke, and her body turned into a stone.

But her evil influence didn't end there.  Tamamo-no-Mae's spirit was locked inside the stone but kept its capacity for inflicting harm, and anyone who touched it died.  The site of the stone is cordoned off; the Japanese government says it's because the area is volcanic and there are sulfurous fumes that could be dangerous. 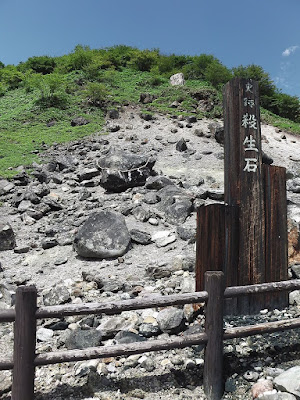 Sessho-seki [Image is in the Public Domain]

To which I respond, "Sure, that's the reason.  Mmm-hmm."  I mean, really.  What am I supposed to believe?  That there are purely natural dangers caused by understood geological processes, or that the spirit of an evil nine-tailed fox woman has been trapped inside a rock that can kill you when you touch it?

I know which one sounds the most plausible to me. 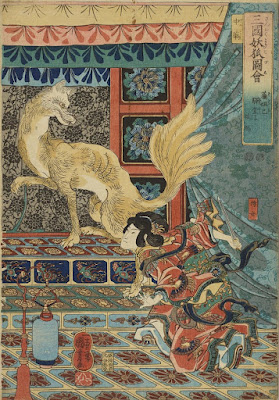 Tamamo-no-Mae and Miura-no-Suke, as depicted by Utagawa Kuniyoshi (1849) [Image is in the Public Domain]

So anyway, apparently people are freaking out that the rock spontaneously split in half, despite the authorities saying, "A small crack had appeared naturally some years ago, and grew deeper until finally the stone fell apart."  The idea is now that the Sessho-seki has split, it released the spirit of Tamamo-no-Mae, who will proceed to wreak havoc once again.

My response is: go ahead, Foxy Lady, do your worst.  My guess is anything you could do would pale in comparison to what's already going on in the world.  It'd be kind of an anticlimax, wouldn't it?  You wait for centuries, trapped inside a rock, concocting all sorts of evil plans, and then the rock breaks and releases you, and you explode out and start causing trouble, and... no one notices.

Tamamo-no-Mae: Ha ha!  I am free!  I shall cause chaos wherever I go!  The weather shall go haywire!  Wars will break out!  The evil shall go unpunished!

Us (laughing bitterly):  Look around you.  You think you can do better than this?

Tamamo-no-Mae (horrified):  Oh.  Oh, my.  Okay... um... do you think you could get some Superglue and help me put this rock back together?

Us:  Yeah, it'd probably be for the best.  Can you take us with you?

Anyhow, if things start getting worse, and you're wondering what's the cause, maybe it's the depredations of an evil nine-tailed fox spirit from Japan.  And after all, the whole "End Times" thing is getting a little hackneyed, don't you think?  Especially since the evangelicals have been predicting the End Times several times a year for hundreds of years, and nothing much has happened.  Not even one Apocalyptic Horseperson, much less four.  So at least this would be a new and different reason as to why everything's so fucked up lately.

Makes as much sense as any other explanation I've heard, although there's still something to be said for "humans sure can be assholes sometimes."