Today we take a trip into the past with three new discoveries from the world of archaeology, sent my way by my eagle-eyed friend and fellow writer, Gil Miller.

The first one has to do with ancient fashion.  Have you ever wondered how our distant ancestors dressed?  Whether it was crudely stitched-together rags, as the peasantry are often depicted?  Leopard-skin affairs, like the Flintstones?  Or nothing but a brass jockstrap, like this guy? 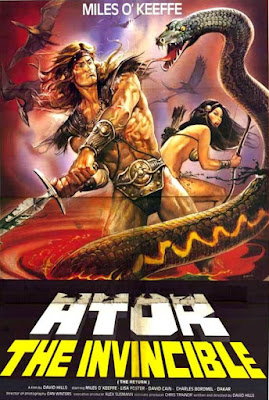 Turns out it wasn't so different from what you and I are wearing.  (I'm assuming you're not naked except for a brass jockstrap.  If you are, I won't judge, but I also don't want to know about it.)  An analysis of the clothing worn by a 3,200 year old mummy recovered from China's Tarim Basin was wearing tightly-woven, intricately-made trousers, built to be durable and allow maneuverability -- a little like today's blue jeans. 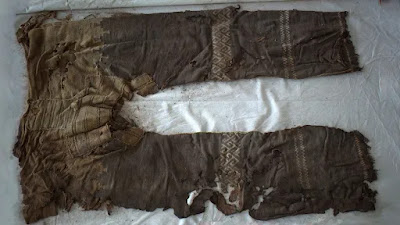 The pants worn by "Turfan Man" [Image from M. Wagner et al./Archaeological Research in Asia, 2022]
The cloth is a tight twill weave -- something that was assumed to be invented much later -- and had a triangular crotch piece that seems to be designed to avoid unfortunate compression of the male naughty bits while riding horseback.  The decoration, including an interlocking "T" pattern on the bands around the knees, is very similar to patterns found used on pottery in the area, and as far away as Kazakhstan and Siberia.
From ancient Chinese fashion items, we travel halfway around the world for something a little more gruesome -- a burial in the Lambayeque region of Peru that seems to contain the skeleton of a surgeon, along with his surgical tools.
The burial has been dated to the Middle Period of the Sican Culture, which would have been somewhere between 900 and 1050 C. E., and was recovered from a mausoleum temple at the rich archaeological site of Las Ventanas.  The man was obviously of high standing; he was wearing a golden mask pigmented with cinnabar, a bronze pectoral, and a garment containing copper plates.  But most interesting was the bundle of tools he was buried with -- awls, needles, and several sizes and shapes of knives.  This, the researchers say, identifies him as a surgeon.
It's hard for me to fathom, but surgery was done fairly regularly back then -- up to and including brain surgery (called trepanning).  There was no such thing as general anesthesia, so it was done under local anesthesia at best, probably supplemented with any kind of sedative or painkilling drugs they had available.  Still, it was a horrible prospect.  But what is most astonishing is that a great many of the patients, even the ones who had holes drilled into their skulls, survived.  There have been many cases of skeletons found that show signs of surgery where the surgical cuts healed completely.
But still, the ordeal these poor folks went through is horrifying to think about, so let's move on to the third and final article, that comes to us from England.  An archaeologist named Ken Dark has led a team of researchers in studying 65 grave sites in the counties of Somerset and Cornwall that date back to a time of history I've always had a particular fascination for -- the Western European "Dark Ages," between the collapse of the Roman Empire as a centralized power in the fourth and fifth centuries C. E. and the reconsolidation of Europe under such leaders as Charlemagne and Alfred the Great, four hundred years later.

The "darkness" of the so-called Dark Ages isn't so much that it was lawless and anarchic (although some parts of it in some places probably were), but simply because we know next to nothing about it for sure.  There are virtually no contemporaneous records; about all we have, the best-known being Gildas's sixth-century De Excidio et Conquesto Britanniae, are accounts that contain legend mixed up with history so thoroughly it's impossible to tell which is which.  I bring up Gildas deliberately, because his is the only record of King Arthur written anywhere close to the time he (allegedly) lived, and the graves that Dark and his team are studying date from right around that pivotal time when Christianized Romano-Celtic Britain was being attacked and overrun by the pagan Angles, Saxons, and Jutes.

The burial practices of noble sixth-century Britons stands in stark contrast from Anglo-Saxon burials from the same period; the Britons, it's believed, scorned the ostentation and ornate decorations of pagan funerals, and by comparison even high-status individuals were buried without much pomp.  What sets these graves apart from those of commoners is that they were set apart from other graves, had a fenced enclosure, and were covered with a tumulus of stones that the early Celts called a ferta, which was a sign of high standing.

"The enclosed grave tradition comes straight out of late Roman burial practices," Dark said.  "And that's a good reason why we have them in Britain, but not in Ireland -- because Britain was part of the Roman empire, and Ireland wasn't...  We've got a load of burials that are all the same, and a tiny minority of those burials are marked out as being of higher status than the others.  When there are no other possible candidates, that seems to me to be a pretty good argument for these being the ‘lost' royal burials."

So that's today's news from the past -- ancient blue jeans, primitive surgery, and Dark Age noble burials.  Sorry for starting your day on a grave note.  But it's always fascinating to see not only how things have changed, but how similar our distant ancestors were to ourselves.  If we were to time travel back there, I'm sure there'd be a lot of surprises, but we might be more shocked at how much like us they were back then.  To borrow a line from Robert Burns, a person's a person for a' that and a' that.