In the last week the northern United States has been swept by a couple of significant winter storms that not only dumped a ton of snow all over the place but drove temperatures down (especially in the upper Midwest) to levels that can only be described as "really freakin' cold."  A friend of mine in northern Minnesota told me that one evening, the wind chill in her home town dropped to -40 C.  While it didn't get that cold here in upstate New York, it definitely was chilly enough to feel like -- whatever the calendar of equinoxes and solstices might say -- we are still a long way off from spring.

And of course, cold weather always creates the same response in the science deniers, and this was no exception.  Just a couple of days ago someone I know posted a photograph of a guy bundled up in about twelve layers, completely covered with snow, with the caption, "Still believe in global warming?"  This was followed by comments that can be summed up as "the scientists say we're actually in a heat wave, how stupid do you have to be to fall for that, hurr durr hurr."

I find it kind of amazing how willing people are to post on social media statements that basically amount to shouting, "look at me, I'm a complete ignoramus."  The evidence supporting global climate change is overwhelming.  Amongst informed individuals, there is no argument any more.  The only people who are still holdouts are the ones who have a vested interest in convincing you that there's no problem -- e.g. the fossil fuels industry, the auto manufacturers, and the elected officials who are in their pockets -- and the people who get their information solely from Fox News.

The "it's cold so global warming is a hoax" attitude is appalling in another way, however.  Even the relatively rudimentary understanding of climate mechanisms we had three decades ago recognized that a global increase in average temperature didn't mean the mercury would rise uniformly across the planet, so to believe that shows you've read zero actual scientific research on the topic for over thirty years.  Climate is a phenomenally complex system, and even if we're sure that the average temperature has risen drastically and will continue to do so -- which we are -- it isn't going to lead to any sort of smooth change.  It's a little like what happens when there's an automobile accident on a busy highway.  Some of the effects are predictable -- such as a slowdown or outright stoppage in the lanes upstream of the accident.  But it doesn't slow everyone on the highway at the same time or at the same rate.  And it leads to a lot of less-predictable ancillary effects, such as a slowdown in the opposing lanes because of rubberneckers and increased traffic on secondary roads because of people trying to circumvent the accident site.

But even that is way easier to model than climate is.  Climate results from interactions between the atmosphere, the land, and bodies of water, and is affected by a number of different factors besides temperature -- air humidity, wind speed, elevation (such as when a mass of air is pushed upward into a mountain ranges), the reflectivity of the surface (i.e, high reflectivity due to snow or ice cover on either land or water tends to slow down any increase in air temperature), air pollution levels, and position of the jet stream.  The result is a system that is extremely complex to model accurately, and which can act quickly and unpredictably when disturbed.

Even so, climatologists have done amazingly well at developing accurate models, and if anything, they've erred on the side of a conservative estimate of what's happening.  Here are a few recent bits of research to illustrate my point.

First, a study out of Rice University three years ago predicted an increase in the intensity of "blocking systems" -- high-pressure air masses that stall and prevent frontal movement behind them.  This can lock in weather patterns for days or weeks.  An example is the catastrophic rain and flooding currently striking Australia, which has been stuck in place because of a high-pressure zone in the Tasman Sea.  The result has been that some areas have received an entire year's worth of rain in four days. 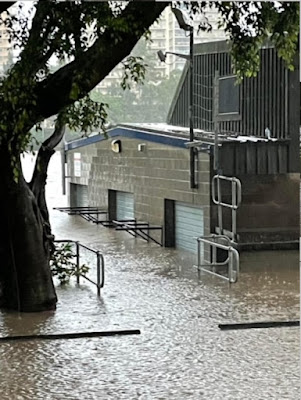 The rainfall is powered by evaporation from the oceans, and that increases with higher sea surface temperatures.  A study published this week in PLOS-Climate describes a thorough survey of worldwide oceanic temperatures, and found that half of the surface area of the Earth's oceans have exceeded record heat thresholds since 2014 -- not just once, but breaking records over and over.

"Climate change is not a future event," said Dr. Kyle Van Houtan, chief scientist for the Monterey Bay Aquarium, who led the research team.  "The reality is that it's been affecting us for a while.  Our research shows that for the last seven years more than half of the ocean has experienced extreme heat.  These dramatic changes we've recorded in the ocean are yet another piece of evidence that should be a wake-up call to act on climate change.  We are experiencing it now -- and it is speeding up."

As I mentioned earlier, an overall average temperature increase can lead to opposite effects depending on where you are.  The same sea surface temperature rise that's created the blocking system and caused devastating flooding in Australia is currently weakening the south Asian monsoon -- the weather pattern that brings the summer rains on which the entire Indian subcontinent depends for agriculture and drinking water.
"Our work strongly suggests that sea surface temperature plays a dominant role in shaping the Indian Summer Monsoon's variability in South Asia," said Yiming Wang, of the Max Planck Institute, who led the study.  "Higher surface temperatures in the Indian Ocean during the Last Interglacial period could have dampened the ISM intensity...  Changes in the hydrological cycle will affect agricultural land, natural ecosystems, and consequently the livelihoods of billions of people.  We therefore need to improve our understanding of the control mechanisms of summer monsoon rainfall to better predict weather extremes such as droughts and floods and devise adaptation measures.  Time is of the essence, especially if ocean warming continues at the rate it is."
Last -- and highlighting how complex these models can get -- a team of scientists from ETH Zürich, the University of Bern, and the University of Tasmania looked at how the increase in ocean surface temperatures can endanger huge marine ecosystems.  They modeled what happened during the summer of 2013, when a mass of surface water nicknamed "the Blob" got stuck in place off the Pacific Coast of North America for two years.  The result was a massive die-off of marine organisms, including an estimated million sea birds.
What the researchers found was that two things also occurred during the formation of the Blob -- a drop in oxygen saturation and an increase in acidity.  So the effect wasn't solely due to the temperature increase.  As I said earlier, it's a complicated system of interlocking causes and effects, and altering one thing inevitably destabilizes everything else.  "To assess the risks of these kinds of events, we urgently need to study the chain of different environmental factors leading to such extremes more closely -- and not only in individual regions, but also at the global level," said study lead author Nicolas Gruber.  "When marine life is confronted with multiple stressors at once, it has difficulty acclimatising.  For a fish species that's already living at the upper end of its optimal temperature range, an added oxygen deficiency can mean death."
One thing I feel obliged to point out is that other than the first cited study (on blocking systems), all of the research I've mentioned in this post was published in the last week.  The data is coming in so fast that it's hard to process, and every bit of it is pointing to the catastrophic (and accelerating) effects of climate change.  Whether it's too late to stop it isn't known; some of the more pessimistic scientists think we've already crossed the "tipping point," where even if we cut off fossil fuel use cold, it won't halt the warm-up.
At this point, there is absolutely no excuse for anyone to remain ignorant about what's happening to our planet, much less to post idiocy like "I'm cold so the world isn't warming up."  (As Stephen Colbert put it a few years ago, "In other good news, I just had dinner so there's no such thing as world hunger.)  I understand that everyone can't be an expert; I'm not an expert, myself.  But it's not beyond anyone's ability to read at least the summaries and abstracts of the research.  Not to do so is pure willful laziness.
And it also puts you in the position of sharing some of the blame for our slow, inexorable slide into the hothouse.