May this house be safe from tigers

One thing I find to be somewhere between amusing and maddening is the length to which people will go to hang on to their cherished notions.

I mean, on some level, I get it.  We all have our own opinions and biases, myself very much included, and it can be pretty jarring to find out we're wrong about something.  But presented with evidence against what we believe, at some point we just have to say, "Okay, I guess I was wrong, then," and revise our worldview accordingly.

Or, more apposite to today's post, when there's a complete lack of evidence for what we believe.  I was thinking about this because of an article in the Sun Journal about Loren Coleman.  Coleman's name should be familiar to any aficionados of cryptozoology; he's been hunting cryptids for decades, and in fact in 2003 founded the International Cryptozoology Museum in Portland, Maine.  He's not some kind of fanatic; he does respect the hard evidence, and has been unhesitating in calling out fakes for what they are.  In fact, the Skeptical Inquirer -- a hard sell if ever there was one -- said, "among monster hunters, Loren's one of the more reputable."

Coming from the Skeptical Inquirer, this was damn close to a love letter.

On the other hand, there's the second half of this quote, which is where we run into trouble.  "...but I'm not convinced that what cryptozoologists seek is actually out there."  This, to me, is the problem with cryptids; considering the sheer number of people out there looking, by now something should have surfaced other than easily faked footprints and blurry photographs.  It's why I don't take my usual "hold the question in abeyance" approach on this topic -- I've moved over into the "probably not" column.  At some point, you have to assume that zero evidence means there's nothing there to see. 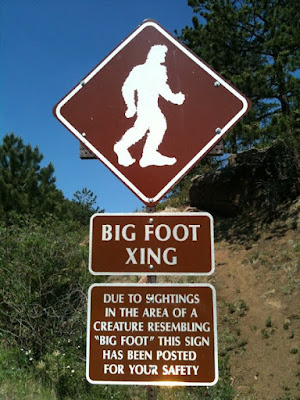 Coleman, of course, has devoted his entire life to hunting cryptids, so he's a classic example of the sunk-cost fallacy; once you have thrown enough of your time, energy, and money into something, it becomes nearly impossible for you to admit you were wrong.  So when Kathryn Skelton, reporter for the Sun Journal, asked Coleman point-blank why there's been no scientifically admissible evidence of Bigfoot despite thousands of people searching for him over the last hundred years, Coleman came up with an explanation that should go down in the annals of confirmation bias:

The problem is most of the cryptid hunters are male.

"I have a feeling that there’s something in the pheromones in males that are driving Bigfoot from them," Coleman said, apparently with a straight face, "and most of the success that’s occurring is with small groups of women that are having contact with no guns, maybe not even cameras, and really not getting all excited because they don’t find evidence right away.  Jane Goodall and every other primatologist that’s had success has been female, and I think that’s going to be the future."
So all those years I spent back-country camping in the Pacific Northwest, little did I know that I was chasing the Bigfoots away with my manly pheromones.
My reaction upon reading this was to say, "Oh, come on."  This kind of argument makes me want to take Ockham's Razor and slit my wrists with it.  It put me in mind of the old joke:
A guy has a friend who, every time he comes for a visit, tosses a pinch of glitter into the air and says, "May this house be safe from tigers."  After doing this a half-dozen times, the guy finally says to his friend, "Um... why are you saying, 'May this house be safe from tigers?'  There isn't a tiger within a thousand miles of here."
The friend gives him a serene smile and says, "Sure works well, doesn't it?"
Now, allow me to say that if any of the cryptids that people are out there searching for do turn out to be real, no one would be more delighted than me.  If there ever was incontrovertible proof of (for example) Bigfoot, the scientists would be trampling each other trying to be the first one to publish a paper about it.  So I'm not hostile to the idea per se, and neither, I suspect, are most scientists.
But how long do you hold out in the face of exactly zero evidence?  And by "evidence" I don't mean eyewitness accounts, or even photos and videos.  Photos and videos are way too easy to fake, and to quote Neil deGrasse Tyson on the subject of eyewitness testimony, "In science, we need more than 'you saw it'...  The human brain and sensory systems are rife with ways of getting it wrong.  Now, maybe you did see something; if so, bring back a piece of evidence that can be studied in the lab.  Then we can have the conversation."
So as much as I understand Loren Coleman's reluctance to give up on his favorite topic, there comes a time when a skeptical person kind of has no choice.  And coming up with some loopy explanation that the Bigfoots are running away because of the researchers' testosterone fumes does not help your case -- or your credibility.