Relics of the distant past

Today we'll stay in an archaeological vein, mostly because a couple of loyal readers of Skeptophilia read yesterday's post and responded with links of their own and messages which basically boil down to, "Yes, but have you seen this?"

The first one comes to us from the ever-entertaining site Mysterious Universe, but unlike their usual fare of Bigfoots and UFOs, this one is about legitimate scientific research.  Not that you could tell from the title, which is "Yorkshire's Atlantis May Have Finally Been Found."  To be fair, the appellation of "Atlantis" isn't the fault of the author, Paul Seaburn; apparently this site, Ravenser Odd, has been called that before.  But unlike Atlantis, Ravenser Odd is a real place.  It was a port city on the estuary of the River Humber, attested thoroughly in records of the time until in 1362 there was a storm that breached the sand-based seawall and swamped it completely, and the once thriving town -- like its mythological namesake -- sank beneath the waves.

The shape of the long, narrow seawall is what gave the place its name, all the way back in Viking times, some four hundred years earlier; Ravenser Odd is a mangled version of hrafns eyr, which means "raven's eye" in Old Norse.  In its time it was a busy place.  It was one of the most thriving ports in the region, and a record from 1299 describes it as containing a central marketplace, wharves, warehouses, a court, a prison, a chapel, two mills, a tannery, an annual fair, and over a thousand residences.  The coastal region near the original submerged town retained the name, and in fact it's mentioned twice in Shakespeare, where he calls it "Ravenspurgh" (Richard II, act 2, scene 1, line 298, and Henry IV Part 1, act 1, scene 3, line 245).

Despite multiple attestations in the records, no one was able to find where the original Ravenser Odd had stood -- until now.

An amateur archaeologist named Philip Mathison, who is something of an expert on Ravenser Odd, stumbled upon an 1892 document on eBay that mentioned "submarine remains" at Spurn, a tidal island north of the mouth of the Humber -- and gave directions on how to find them.  Mathison went out in a boat with an echo sounder, and found what looked like a human-made rock wall, exactly where the document had said it would be.

"People had assumed it was way out to sea, as the shape of the peninsula now is very different to how it was in the thirteenth century," Mathison said.  "This document showed a stone ledge to the east of Spurn which I believe could be the walls of a dock or quay... The ridge was most likely rock armor to protect the port, as it was under threat from erosion way before it was abandoned.  The bulk of the town's buildings were on a shingle bank called The Old Den, to the west side of Spurn, and some brickwork from them has been found in the past.  The town curved around like a fish hook and the wharves were at the other end... But it needs a proper dive to find out."
Seems like Mathison is going to get his wish -- two archaeologists from the University of Hull have already purchased scanning equipment and obtained funding for other supplies for an expedition this summer, when the weather in the North Sea improves.
Also with a Viking connection is a study done at the University of Massachusetts - Amherst that seems to upend a long-held theory about why the Norse settlements of Greenland died out in the late fourteenth century.  Previous models had attributed the collapse to the onset of the Little Ice Age, a worldwide drop in global average temperature that (among other things) caused the Greenland sea access to freeze up year round and made it an even more miserable place to live than it already is.  But the new study -- using two organic molecules as markers that are known to indicate, respectively, temperature and water availability -- showed that during the period of the collapse, the temperature didn't drop much, but it became significantly drier.
The harsh winters were one thing, but when the rain stopped falling even in the warmest months of summer, that was the kiss of death for the crops and domesticated animals at the Norse settlements, and ultimately, the Norse themselves.
For the last story, we return to the British Isles, where a geophysical survey near the town of Aberlemno uncovered a 1.7-meter-long stone carved with designs identified with the Picts, the mysterious people who inhabited northern and eastern Scotland before the Dál Riada Scots moved in and kind of took over in the tenth century.  There aren't many Pictish records around; they were Celtic, but appear to have spoken a Brythonic language related to Welsh, Cornish, and Breton, not a Goidelic language like Gaelic, Irish, and Manx.
The discovery was made quite by accident.  While moving some surveying equipment, they noticed some anomalies that seemed to indicate the buried foundation of a settlement.  They dug into the soil, and hit a rock. "I just brushed my hand, and there was a symbol," said Zack Hinckley, an archaeologist at the University of Aberdeen.  "And we had a freakout... there were genuine tears." 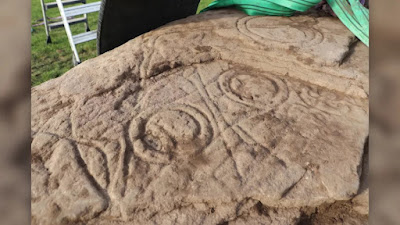 The Pictish stone from Aberlemno, Scotland
The difficulty is that given the paucity of Pictish records, little is known of the script, and it's currently unknown whether these were written language, or simply decorative symbols.  The stone has been removed to an archaeological conservation lab in Edinburgh for further study.
So there you are.  The world of archaeology has been hopping lately.  It's always amazing to me that despite the extensive research that's been done, with state-of-the-art mapping and surveying tools, that there are still plenty of astonishing artifacts out there to find.
Some of them, apparently, right underneath our feet.