One of the hardest things about understanding quantum physics is that it is so fundamentally different from the way things act on the macroscopic level.

Even a layperson's grasp of the subject -- leaving aside all the abstruse mathematics -- requires one to jettison every expectation that the everyday objects we see and interact with will behave in the same fashion as the "objects" (as it were) on the subatomic level.  I put the word "objects" in quotes advisedly; the word "particle" brings to mind a hard, discrete little lump of matter, and that's still how they're drawn in science books: 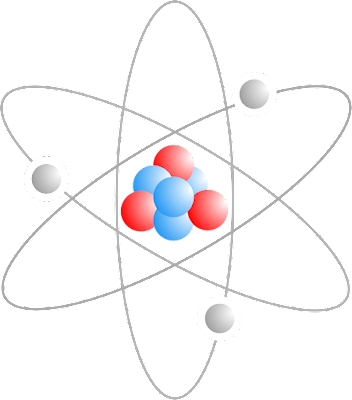 The reality is far weirder, and far harder to picture; particles, all the way down to photons of light, aren't little miniature bullets zinging around, they're actually smeared-out fields of probabilities.  The reassuringly solid matter we, and everything else, are made of turns out to be (at its basis) composed of something that is ephemeral, not even existing at one particular location in any real sense.

But it bears mention that however bizarre this is, it is not just a wild guess.  The predictions of quantum mechanics have been tested every which way from Sunday, and each time, the results have been spot-on.  So it may be unsettling, it certainly is counter-intuitive, but if we buy the methods of science at all, we have to conclude that whether we like it or not, this is what reality is.

Take, for example, the quantum boomerang effect, which I only found out about a couple of days ago because of some research out of the University of California - Santa Barbara.  The idea here, so far as I understand it -- and I will once again throw in the caveat that I'm not much better than a layperson myself, so bear with me -- has to do with what occurs when electrons in a substance are given a repeated kick of energy.

Picture, for example, something that spins freely on an axle, like a fan.  Imagine taking a fan (Nota bene: Mr. Safety says unplug it first!), and giving a regularly-timed tap on the blades with one finger.  The fan would absorb the energy, overcoming any resistance in the axle due to friction, and the blades would begin to turn; if you timed it right, you could get it spinning at a decent clip.

So far, nothing odd.  Now, imagine an analogous situation on the subatomic level.  Suppose you had a substance with atoms arranged in a lattice, but there are some defects in the lattice -- impurities, gaps, and so on.  In a metallic lattice, electrons are fairly free to move (this is why metals make good conductors); but the defects inhibit electron transfer, just as friction was working against you in turning the rotor blades.  Here, though, something completely different happens when you disturb the system.  If you give the lattice regular pulses of energy, the electrons are jolted out of their position, but they don't keep moving -- they immediately turn around and settle back down in their original positions.

Thus the nickname "the boomerang effect."

"It's really a fundamentally quantum mechanical effect," said physicist David Weld, who co-authored the paper, in an interview with Science Daily.  "There's no classical explanation for this phenomenon...  In a classical system, a rotor kicked in this way would respond by constantly absorbing energy from the kicks.  Take a quantum version of the same thing, and what you see is that it starts gaining energy at short times, but at some point it just stops and it never absorbs any more energy.  It becomes what's called a dynamically localized state."
The explanation, Weld says, lies in the dual particle-wave nature of subatomic particles.  Because matter on the smallest scales has both particle-like and wave-like properties, it's going to exhibit some weird properties as compared to the solid stuff we see around us.  "That chunk of stuff that you're pushing away is not only a particle, but it's also a wave, and that's a central concept of quantum mechanics," Weld said.  "Because of that wave-like nature, it's subject to interference, and that interference in this system turns out to stabilize a return and dwelling at the origin."
So we can add that to our list of weird and counterintuitive behavior on the quantum level.  The universe is a strange, compelling, beautiful place, and the more you study it, the stranger it gets.  Me, I kind of like that.  I don't mind that things aren't as they seem.  How boring things would be if our "common sense" got it right every single time.
Even if I don't fully understand it -- even if I never fully understand it -- I'd much prefer that the cosmos never loses its ability to astonish us.