One of the difficulties in detecting spurious claims occurs when the writer (or speaker) mixes fact, and real science, in with spurious bits and stirs the resulting hash so thoroughly that it's hard to tell which is which.  When a claim is made of unadulterated bullshit, our job is easier.  Mixtures of science and pseudoscience, though, are often hard to tease apart.

A loyal reader of Skeptophilia sent me a good example of this yesterday, a link to an article on the website NaturalSociety called "Microwave Dangers - Why You Should Not Use A Microwave." 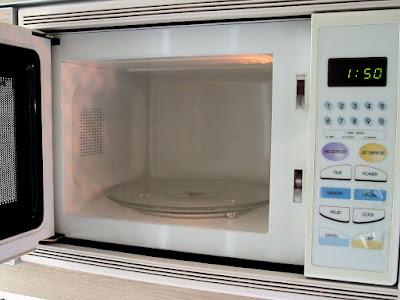 [Image licensed under the Creative Commons Mk2010, Microwave oven (interior), CC BY-SA 3.0]
In this piece, author Mike Barrett describes the terrible things that microwave ovens do to the people who use them and to the food that's cooked in them.  Amongst the claims Barrett makes:
Okay, let's look at these claims one at a time.
So, anyhow, that's my analysis of Barrett's anti-microwave screed.  He's pretty canny, the way he scatters in actual facts and correct science with poorly-understood science, pseudoscience, and outright nonsense; the difficulty is, you have to have a pretty good background in science to tell which is which.  All of which argues for better science education, and better education in critical thinking skills.  But any effort I make in that direction will have to wait, because my coffee's getting cold, and I need to go nuke it for a couple of seconds.