Self-proclaimed psychics hated James Randi, the venerable debunker of all things paranormal, who died in October 2020 at the honorable age of 92.  On one hand, it's obvious why; he loathed charlatans, especially those who in plying their trade rip off the gullible to the tune of thousands of dollars.  But honestly, there's a way in which Randi shouldn't have been so detested by the psychics.  After all, he wasn't saying, "Your claim is false and you're lying," he said, "Show me under controlled conditions that you can do what you say you can do."  Which you'd think is fair enough.  Given how many people out there claim to have paranormal abilities, it seems like at least one or two of them would have made a credible case (especially since the James Randi Foundation was offering a million dollar prize for the first person who could succeed).
But no.  Not one single person ever met the minimum criteria for scientifically-admissible evidence; in fact, very few psychics even took the bait.  A few of them said they wouldn't put themselves in the situation of having to demonstrate their ability in a situation where Randi's "atmosphere of suspicion and distrust" would interfere with the psychic resonant energy fields (or whatever), but most of them wisely decided to stay silent on the matter and ignore the challenge completely.
And it worked.  Being a psychic is as lucrative as ever. 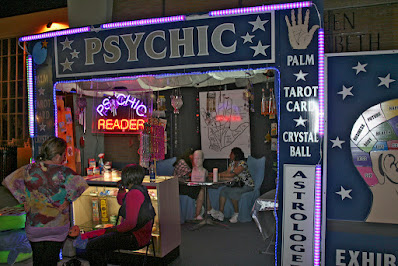 [Image licensed under the Creative Commons Gunnshots (Don), Psychic reading, CC BY-SA 2.0]
Of course, since what the psychics do is make predictions, we don't even need Randi's method to check and see if there's anything to their claims; we can merely look back at the yearly predictions, and see what percentage of them were correct -- and if that hit rate exceeds what we'd expect from pure chance.
Which is exactly what a group of skeptics in Australia did.  The Great Australian Psychic Prediction Project, which just announced their results last week, analyzed 3,800 predictions made in the past twenty years by 207 self-styled psychics, and put each into one of five categories:
The results are interesting, to say the least.  The "flat-out wrong" category amounted to 53% of the total, which doesn't seem too bad until you look only at the claims that were either verifiable and correct, or verifiable and wrong -- at which point the "wrong" category balloons to 83%.
Not a very impressive showing.
This gets even worse when you consider the major world events that every one of the 207 psychics involved in the study missed entirely.  These included:
You'd think that events of this magnitude would have caused at least a small disturbance in The Force, or whatever the hell they claim is happening, but no.  The psychics were as caught off guard as the rest of us.
I'm all for keeping an open mind about things, but at some point you have to conclude that a complete absence of hard evidence means there's nothing there to see.  On one hand, I understand why people want psychic abilities to be real; it gives some kind of plan or pattern to what seems otherwise like a chaos-riddled reality.  But as my grandma used to tell me, "Wishin' don't make it so."  I've never found that the universe is under any obligation to conform to what I'd like to be true.
Or, as science writer and novelist Ann Druyan said, much more eloquently:

[Science] is a never-ending lesson in humility.  The vastness of the universe—and love, the thing that makes the vastness bearable—is out of reach to the arrogant.  This cosmos only fully admits those who listen carefully for the inner voice reminding us to remember we might be wrong.  What’s real must matter more to us than what we wish to believe.  But how do we tell the difference?
I know a way to part the curtains of darkness that prevent us from having a complete experience of nature.  Here it is, the basic rules of the road for science: Test ideas by experiment and observation.  Build on those ideas that pass the test.  Reject the ones that fail.  Follow the evidence wherever it leads.  And question everything, including authority.