I really am extraordinarily lucky.

Following the breakup of my (all things considered) disaster of a first marriage, I had pretty much figured that was it for romantic entanglements.  Then in November of 1999, a mutual friend introduced me to a woman named Carol who loved travel, dogs, birdwatching, music, the outdoors, and red wine, saying that there was no way two people so similar shouldn't get together.  With some hesitation -- both due to my earlier decision to avoid dating, and a hefty dose of social awkwardness -- I asked her out.

It soon became obvious we were soulmates.  We'd only been dating for six weeks when I said, just making a joke, "I'm going to take a trip to Iceland -- want to come with me?"  I was fully expecting her to say, "Iceland?  Why the hell would anyone go to Iceland?"

What she said was, "When do we leave?"

Our courtship was, in many ways, a comedy of errors, appropriate enough in retrospect given the screwball comedy our life together has turned out to be.  Our second trip overseas, to Belize, was great fun -- till we (and everyone else in the camp where we were staying) simultaneously got food poisoning.  It only lasted twelve hours, but was absolutely the sickest I've ever felt.  I won't go into gruesome details, but I'll just say that after we recovered, Carol remarked that if two people can coexist in a small cabin while elbowing each other out of the way every fifteen minutes to make it to the bathroom in time, without one of them killing the other, it has to be a match made in heaven.

I agreed.  After two more years of wild adventures (and no repeats of the Belize incident, fortunately), in July of 2002, we decided to make that match permanent. Kind of amazing how well I clean up, honestly.

Now, almost twenty years later, we've only discovered more and more ways we're similar.  I can't tell you the number of times one of us has said something completely random, and the other has looked shocked and said, "I was just about to say exactly the same thing."  We are alike in good ways and bad -- we've also frequently remarked about how our less-praiseworthy habits reinforce each other.  This is particularly obvious when it comes to tidiness.  We've been told that our décor style is called "shabby chic."  I don't know about the "chic" part, but we've got "shabby" locked up.  Our approach to housekeeping can best be described as "There appears to have been a struggle."

But along the way we've had a huge amount of fun, even if finding out visitors are coming induces a panicked frenzy of vacuuming, mopping, sweeping away cobwebs, and putting away piles of books, art work, pottery, dog toys, and weird assorted souvenirs from various trips that have been strewn about for months.  But you can only do so much.  Even afterward, our house looks like a poorly-maintained museum. 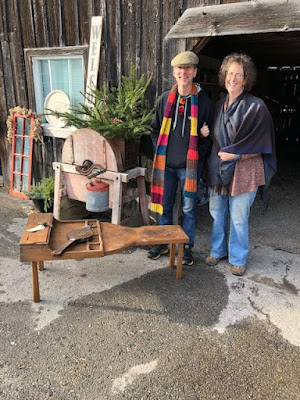 On a trip to Canada a couple of years ago, while visiting an antique store.  The cobbler's bench in front of us is now our coffee table.

The adventures have never stopped. 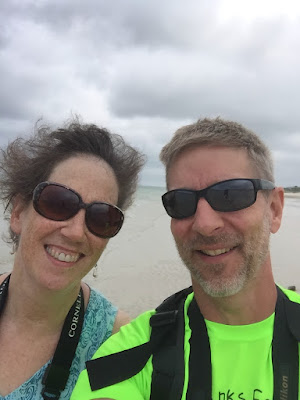 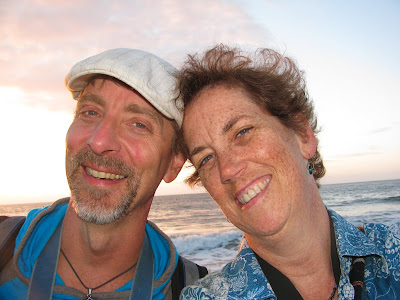 I still periodically find it baffling that she puts up with my rather squirrelly personality, navigating my yo-yoing moods with apparent aplomb.  All I know is what I started out with: I am damn lucky.

And I found out just day before yesterday that our rapport forecasts a long and happy future.  According to a study of 154 couples published last week in the Journal of Personality and Social Psychology, couples who have the kind of spark Carol and I have tend to gain both in satisfaction and longevity.

"Couples in the study varied greatly in... measures of positivity resonance, with some couples showing dozens of moments of emotional and physiological synchrony and others showing few or none," said psychologist Robert Levenson, of the University of California - Berkeley, who co-authored the study.  "We focused on those fleeting moments when you light up together and experience sudden joy, closeness and intimacy.  What we found is that having these brief shared moments, known as ‘positivity resonance,’ is a powerful predictor of how healthy we’re going to be in the future and how long we’ll live."
Which is cheering.  Even more fascinating is that that resonance goes all the way down to the physiological level -- couples who scored high on the assessment not only synchronized such obvious social cues as smiling and laughing, their heartbeats and breathing synchronized, as did their blood levels of such powerful (positive) mood regulators as serotonin and oxytocin.
So this all bodes well for Carol and me.  That said, I have to say that there are ways we're not alike; for example, our approach to shopping. 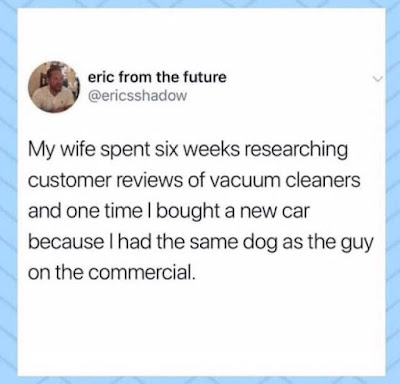 Carol will comparison-shop for paper towels.  I, on the other hand, am so impulsive I'm flat-out dangerous to have by your side when there's a big purchase.  Part of it is that I loathe shopping so much that I'll do damn near anything, including paying twice as much as I should, just to get it over with.  I really related to the anecdote that humor writer Dave Barry tells, when he and his wife were looking for a house to buy:

Dave Barry:  This is just perfect!  I love it!  I think this is ideal, don't you, dear?
His wife:  We're still in the real estate office.

In any case, the similarities vastly outweigh the differences, and even our unfortunate shared tendencies, not to mention our differences, are ameliorated by the fact that we're both pretty accepting of each other's foibles.  So the Levenson et al. study is really immensely cheering.  I'm looking forward to many more years together, traveling, playing with dogs, drinking wine, and navigating our way through the chaos of our shabby chic lives.