The subject of today's post isn't anything new; it was just new to me, and, I suspect, will be to a good many of my readers, as well.  I found out about it from a long-time loyal reader of Skeptophilia, who sent me a link about it with a note saying, "Okay, this is interesting. What think you?"

The link was to a 2008 article that appeared in Phys.org entitled, "Cuneiform Clay Tablet Translated for the First Time."   The tablet in question is called the "Sumerian planisphere," and was discovered in the ruins of Nineveh by a British archaeologist named Henry Layard in the middle of the nineteenth century.  From where it was found, it was dated to around 700 B.C.E., and although it was recognized that part of what it contained was maps of constellations, no one was quite sure what it was about. 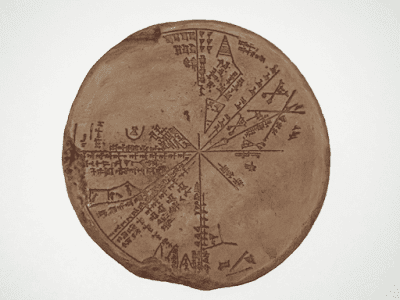 The Sumerian planisphere [Image is in the Public Domain]

The researchers were puzzled by the fact that the arrangements of the stars in the constellations were close to, but not exactly the same as, the configurations they would have had at the time it was made, but then they concluded that those would have been their positions 2,400 years earlier -- and they claimed the text and maps didn't just show the stars on any old night, but on a sequence of nights chronicling the approach of a comet or asteroid.

Which, ultimately, hit the Earth.

They claim the collision site was near Köfels, Austria, and triggered a five-kilometer-wide fireball.  Why no huge crater, then?  The answer, they say, is that the steep side of the mountain gave way because of the impact, and a landslide ensued.  Organic matter trapped in the debris flow gave an approximate date, but once deciphered, the Sumerian planisphere's detailed sky maps (including the position of the Sun, the timing of sunrise, and so on) supposedly pinpointed the exact day of the impact: the 29th of June, 3123 B.C.E.

Between the planisphere and the geometry of the collision site, the researchers claimed that the comet came in at a very shallow angle -- their estimate is about six degrees -- clipped the nearby peak of Gamskogel, and exploded, creating a five-kilometer-wide moving fireball that finally slammed into Kófels head-on.

You may be wondering why Sumerian astronomers had any particular interest about an impact that occurred almost four thousand kilometers away.  They have an answer for that, too; the shallow impact angle created a sheet of superheated debris that arced away from the impact site, and right toward what is now the Middle East.  A 2014 paper by Joachim Seifert and Frank Lemke concluded that the greatest amount of damage didn't occur right at the collision site, but where all that flaming debris eventually landed -- in Mesopotamia.

"The back plume from the explosion (the mushroom cloud) would be bent over the Mediterranean Sea re-entering the atmosphere over the Levant, Sinai, and Northern Egypt," said Mark Hempsell of the University of Bristol, who is the chief proponent of the Köfels collision hypothesis.  "The ground heating though very short would be enough to ignite any flammable material - including human hair and clothes.  It is probable more people died under the plume than in the Alps due to the impact blast."
The dust and ash from the event caused a hundred-year-long "impact winter" that triggered droughts, leading to a several-centuries-long famine that ultimately caused the collapse of the Akkadian Empire.
Okay, so that's the claim.  There are, unfortunately, a host of problems with it, beginning with those pointed out by the scathing rebuttal by Jeff Medkeff in Blue Collar Scientist.  The first issue is that there is "impact glass" -- vitrified shards of debris partially melted by a collision -- in central Europe, but it dates to much longer ago (certainly more than eight thousand years ago).  There is no impact debris to be found between central Europe and the Middle East anywhere near 3,100 B.C.E., no scorched pottery shards or charred bones that would be indicative of a rain of fire.  An asteroid or comet "clipping" a mountain -- and then generating a plume of debris that was still superheated four thousand kilometers downstream -- would have sheared off the entire mountain top, and there'd be clear evidence of it today.  Last -- and most damning -- the Köfels formation has been studied by geologists and found to be not a single event, but a series of landslides, none of which show convincing evidence of having been triggered by an impact.
The scientists involved don't even seem sure of their own chronology; the Phys.org article says 3123 B.C.E. (the 29th of June, to be exact), while the Seifert and Lemke paper says the impact occurred almost a thousand years later (in 2193 B.C.E.).  The latter date at least is closer to the claimed civilization-destroying effects; the Akkadian Empire fell in around 2154.  It seems likely, though, that the collapse of the Akkadians (and various others, including the Indus Valley Civilization, the Egyptian Old Kingdom, and the Chinese Liangzhu Culture) was due to a drought called the "4.2 Kiloyear Event."  The cause of that is uncertain, but probably wasn't an impact (again, because of the lack of clear stratigraphic evidence).  The most likely culprit was a shift in cold-water currents in the North Atlantic changing patterns of rainfall, but even that is speculative.
As far as Hempsell's even more outlandish claim -- that the Köfels impact generated the story of the destruction of Sodom and Gomorrah -- I won't even go into details except to say that there is evidence of a much smaller airburst explosion where the cities were allegedly located, but once again, it's from a different date (around 1650 B.C.E.).  As for any other evidence of the biblical "Cities on the Plain," it's slim to nonexistent.  Archaeologist Israel Finkelstein, of Tel Aviv University, called the tale of the destruction of Sodom and Gomorrah "an etiological story, that is, a legend that developed in order to explain a landmark.  In other words, people who lived in the later phase of the Iron Age, the later days of the kingdom of Judah, were familiar with the huge ruins of the Early Bronze cities and told a story of how such important places could be destroyed."
So given the (1) lack of any reasonably reliable evidence, (2) a chronology that even the researchers don't seem to be able to keep straight, and (3) plausible alternative explanations for the supposed societal aftereffects, I'm afraid I'm gonna be in the "don't think so" column on this one.  As dramatic as it would be if the astronomers of Sumer documented the approach and ultimate collision of a comet or asteroid, a collision that ultimately showered flaming debris over the entire Middle East, I think we have to set aside the drama of an imaginary fireball for the cold light of reason.