It's fascinating how long into our past we've had rituals surrounding death.

There's decent evidence that our cousins the Neanderthals -- which went extinct on the order of forty thousand years ago -- buried their dead, and used ceremonial pigments like red and yellow ochre to decorate the bodies.  What I'm curious about is if those rituals were performed purely as fond remembrance of the the person who had died, or if it had a more religious significance.  Did they believe in an afterlife?  Was the reverence shown to a dead person's body because of belief that the person's soul still, in some sense, inhabited the remains?  Or some other reason entirely?

It's all too easy to misinterpret the tangible evidence left behind, even from the relatively recent past.  Take, for example, the practice -- most common in Scotland and England -- of placing sturdy metal cages over grave sites.  The more fanciful-thinking believe it was because of a fear of vampires or zombies -- to protect the living from the dead. 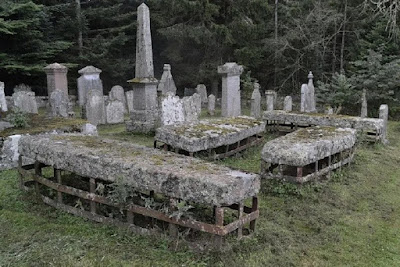 A "mortsafe" in Cluny, Aberdeenshire, Scotland

The real reason -- which we know from the writings of the time -- was that it was actually to protect the dead from the living.  Grave robbing was common in the seventeenth and eighteenth centuries, not only to steal any valuables the person might have been buried with, but to sell the corpse itself to medical or anatomical laboratories for dissection.  (Recall the early nineteenth century Burke and Hare murders, where a pair of enterprising young men decided it was more lucrative to kill people themselves and sell their bodies than to wait for them to die; Hare turned King's evidence in exchange for immunity if he testified against Burke, which he did.  Burke was hanged -- and in a grisly but ironic twist, his body was given to an anatomical laboratory for dissection.)

So it's harder than you'd think to ascertain the motives people had for certain ritual practices in the past.  As far as the decoration of bodies by the Neanderthals, of course, at this point it's impossible to know.  But it's fascinating that our (very) distant ancestors had burial rituals not so very different from our own.

A recent find in Turkey has shown that modern humans have been doing this sort of thing for a very long time as well.  Çatalhöyük, nicknamed the "oldest city in the world," has provided fascinating archaeological finds before; the "Mother Goddess of Çatalhöyük," a six-thousand-year-old ceramic statue probably associated with rituals of fertility (sex being the other thing people have been obsessed with for a long time) is probably the most famous artifact from the site.  (If you're wondering how Çatalhöyük is pronounced -- heaven knows I was -- I'll save you the trouble.  Near as I can get, it's something like "chot-al-hoik.") 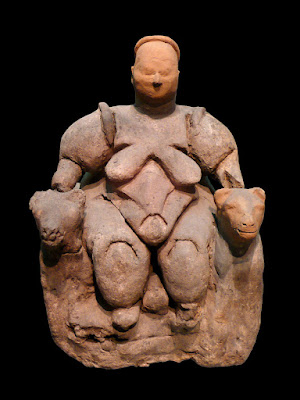 A new find at the site, though, is equally interesting.  A team from the University of Bern has uncovered nine-thousand-year-old bones -- so a full thousand years older than the Mother Goddess figurine -- that show evidence of having been painted.  Not only were they painted, they appear to have been unearthed more than once, and repainted.  Fascinatingly, they used different colors for different genders -- cinnabar/red for males, copper-bearing minerals/blue and green for females.  Not all the bones were so decorated; it may have been a mark of status, or membership in a ruling class or priestly class, but all that is speculation.  (The fact that there have been painted bones of children found suggests that it wasn't mere individual status that was the deciding factor.)

There's also an association between the number of painted burials in a building, and the amount of painted decoration on the walls.  "This means when they buried someone, they also painted on the walls of the house," said study senior author Marco Milella.  "Furthermore, at Çatalhöyük, some individuals stayed in the community: their skeletal elements were retrieved and circulated for some time, before they were buried again.  This second burial of skeletal elements was also accompanied by wall paintings."

I'd like to think that the painted bones were a sign of reverence and not fear of retaliation by an angry spirit, but that too is speculation.  All we have is the artifacts to judge by.  Even so, it's fascinating to get a glimpse into the distant past of our own species.

And you have to wonder what our distant descendants will make of the artifacts left from our own society.  What will they think of the marble and granite monuments we raised over the dead?  It puts me in mind of the eerie, atmospheric rhyme I saw on a gravestone in the cemetery in Waynesburg, Pennsylvania where my great- and great-great grandparents are buried:

Remember, traveler, as you pass by,
As you are now, so once was I;
As I am now, so you will be;
Prepare for death, and follow me.