A flower in amber

Today's post comes to us purely from the "Okay, This Is Cool" department.

I've been fascinated with plant taxonomy since long before I knew the word.  I couldn't have been more than about seven years old when a friend of the family gave me a lovely old book by the early twentieth-century botanical illustrator F. Schuyler Mathews called Field Book to American Trees and Shrubs.  Not only did I use it to try to identify every tree in my neighborhood, I found out something about how plants are classified -- not by leaf shape (which at the time seemed to me the most logical characteristic to use) but by flower structure.  That's when I learned that beeches, oaks, and chestnuts are in the same family; so are rhododendrons, heather, blueberries, and cranberries; so are birches, alders, and hazelnuts; so, most surprisingly to me, are willows and poplars.

It was also my first introduction to how difficult the classification of organisms actually is, something I learned a great deal more about when I took evolutionary biology in college.  The standout from Mathews's book in that respect is the genus Crataegus, hawthorns, of which he lists (and illustrates with beautiful woodcuts) over a hundred species, many of which looked (and still look) exactly alike to my untrained eye.  Taxonomists argue vehemently over how particular species are to be placed and who is related to whom, although the advent of genetic analysis and cladistics has now provided a more rigorous standard method for classification.

What I didn't know, even after my umpteenth perusal of the Field Book, was that the strange and magical-sounding scientific names of plant families Mathews mentions are barely scratching the surface.  You go elsewhere in the world, all bets are off; you'll run into plants that are in families with no members at all in the United States.  An odd historical filigree is that one of the reasons the British colonizers felt so at home in northeastern North America was that the plants were familiar; oaks, ashes, beeches, birches, willows, maples, pines, and spruces are found in both places (although the exact species vary).  Go to southeast Asia, South America, or pretty much anywhere in Africa, though, and even someone well-versed in the plants of North America and western Europe might well not recognize a single species.  I found that to be the case in Malaysia -- a (very) little bit of reading about the flora of the places I visited gave me at least a name or two, but I'd say 95% of what I saw I couldn't even have ventured a guess about. 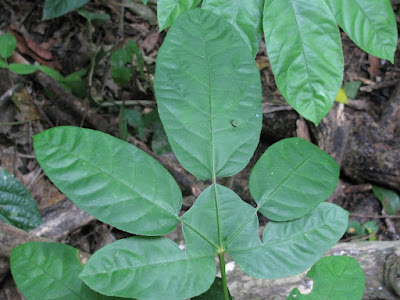 One of the many peculiar plants I saw in the rain forests of Malaysia -- I still don't know what it is, but it sure has a cool-looking leaf.

The reason this comes up is an article sent to me by a friend and loyal reader of Skeptophilia about a fossil from Myanmar that was the subject of a recent paper in The Journal of the Botanical Institute of Texas.  Encased in amber, the flower is almost perfectly preserved -- despite being just this side of one hundred million years old, a point at which the dinosaurs would still be in charge of everything for another thirty-four million years.

If it sounds like figuring out the taxonomy of modern plants is a challenge, it gets way worse when you start looking at plant fossils.  Not only do we not have living plants to analyze genetically, often what we're having to judge by is what's left of a leaf or two.  Fortunately, in this case what the researchers have is a preserved flower -- remember that flowering plants are classified by flower structure -- and that was enough to convince them that they were not only looking at a previously unrecorded species, but a previously unrecorded genus -- and possibly a whole new family.

Most fascinating of all, the researchers aren't even sure how Micropetasos fits into known plant systematics.  The paper says about all we can say so far is that it seems to belong to the clade Pentapetalae -- which doesn't narrow it down much, as that same clade contains such distantly-related plants as roses, asters, cacti, cucumbers, and cabbage.

Long-time readers might recognize the name of the lead author of the paper -- George Poinar.  This isn't the first time he's pulled off this kind of botanical coup.  About a year and a half ago, I wrote about another of Poinar's discoveries in Burmese amber, a little flower called Valviloculus pleristaminis, which also was of uncertain placement amongst known plant families.  Amazing that in bits of fossilized tree sap we can find remnants that allow us to piece together the flora of the Cretaceous Period.
Of course, what it always brings up is the elegiac thought that however many fossils we find, the vast majority of species that have existed on Earth left no traces whatsoever that have survived to today.  If we were to take a time machine back a hundred million years, Micropetasos and Valviloculus we might perhaps recognize from Poinar's work; but there would be thousands more that are completely unfamiliar.  The lion's share of prehistory is unknown -- and unknowable.
But at least we have one more little piece, a tiny flower in amber.  When it was growing, there were triceratopses and T. rexes stomping around, and our closest ancestors were small, rodent-like critters that still had tens of millions of years of evolution before they'd even become primates.  That we can have any sort of lens into that distant, ancient world is astonishing.