The adage goes, "Extinction is forever."

It's a sobering thought.  There's been talk of "de-extinction" -- using intact DNA from well-preserved fossils to resurrect, Jurassic-Park-style, extinct animals -- but so far, the research in that vein has been tentative and not particularly promising.  Plus, there are the inevitable ethical questions about bringing back woolly mammoths, passenger pigeons, and dodos into a world where their environment has changed into something they couldn't survive in anyway.  It seems like recreating a few individuals of an extinct species, then having them live out their lives in zoos, is nothing more than generating a handful of entertaining curiosities at a very great cost.

There are, however, a few species that have been declared extinct which have turned out not to be.  The most famous of these is the coelacanth, a weird-looking fish that's one of the lobe-finned fish, the fish group with the closest relationship to amphibians.  It was thought that all the lobe-fins had become extinct along with the non-avian dinosaurs during the Cretaceous Extinction 66 million years ago, but then someone caught one in the Indian Ocean.  There are, in fact, two living species of coelacanth -- the West Indian Ocean coelacanth (Latimeria chalumnae) and the Indonesian coelacanth (Latimeria menadoensis).  This long-term survival of a species that was thought to be long gone has resulted in the coelacanth being labeled a "living fossil" or a "Lazarus taxon."

There are also the ones that have been declared extinct, but that a handful of true believers -- and sometimes some scientists, as well -- are convinced are still alive.  The last thylacine, or Tasmanian wolf (Thylacinus cynocephalus), which is neither a wolf nor restricted to Tasmania, died in a zoo in 1936 -- except there continue to be sightings of purported thylacines, both in Tasmania and adjacent South Australia.  In fact, there's a Facebook group devoted to alleged thylacine sightings, which so far, have either been anecdotal, or accompanied by photos of Bigfoot-level blurriness.

Then there's the ivory-billed woodpecker (Campophilus principalis), an enormous woodpecker species that used to live in swampy regions of the North American southeast.  The last confirmed sighting was in Louisiana in 1944, but there have been sporadic reports ever since -- most, probably, of the related (but smaller) pileated woodpecker (Dryocopus pileatus).  But a friend of mine, an employee of the Cornell Laboratory of Ornithology, was part of the team sent to investigate a cluster of alleged sightings, and she was one of the people who say they actually saw one.  Now, let me add that my friend is an accomplished and knowledgeable birder, and knew what she was looking for; she, and the other members of the team, would not mistake a pileated woodpecker for this bird.  Unfortunately, the only video they got was short and of poor quality, and although she and the rest of the team have serious credibility, it still amounts to a single anecdotal report, and a lot of folks are not convinced.

All of this is just by way of introducing a discovery that should give some hope to the thylacine and ivory-billed woodpecker aficionados.  Just last week, a paper in the journal PhytoKeys described the (re)discovery of a plant in the family Gesneriaceae, a tropical group most familiar to collectors of rare houseplants -- the best-known members are the African violet (Saintpaulia spp.),  Cape primrose (Streptocarpus spp.), and gloxinia (Gloxinia spp.).

The recent discovery was in the Centinela region of southern Ecuador, in the foothills of the Andes Mountains.  Centinela has been devastated by deforestation -- by some estimates, 97% of the original old-growth rain forest has been cleared or extensively damaged -- so it's to be expected that any species endemic to the region are gone.  That's what the botanists thought about a glossy-leaved, orange-flowered plant that grew in the humid understory; it was last seen in the 1980s.  By the time it was discovered and catalogued, it was gone.

And then, a couple of months ago, some botanists studying what's left of Centinela found that it wasn't extinct after all.  Here's the plant: 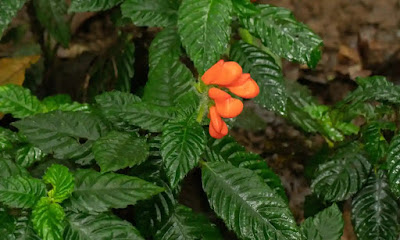 They took lots of photographs but were careful not to disturb the few remaining plants -- nor are they telling exactly where they found them.  This same strategy was adopted by the folks from Cornell looking for the ivory-billed woodpecker; the last thing they needed was a bunch of overenthusiastic amateurs stomping about the place (and you know they would).  But it is a hopeful thought, that some of the species we thought were gone forever might still be out there somewhere.  (For what it's worth, they're keeping the name Gasteranthus extinctus, and hoping that it doesn't one day become accurate in fact.)

"Rediscovering this flower shows that it’s not too late to turn around even the worst-case biodiversity scenarios, and it shows that there’s value in conserving even the smallest, most degraded areas," said Dawson White, a postdoctoral researcher at the Field Museum in Chicago, who was the paper's lead author.  "New species are still being found, and we can still save many things that are on the brink of extinction."
So that's today's optimistic news.  Me, I'm still hoping for the thylacine.  Those things were cool.  While thus far the evidence thus far has been less than convincing, it's certainly still a possibility that it -- and some of the other species most folks have given up on -- are still alive after all.