Back in December, I completely skeeved out some of my readers with a discussion of parasites, more specifically the protist Toxoplasma gondii.  Toxoplasma causes the disease toxoplasmosis, and a number of mammalian species are hosts, most notably cats, humans, and rats.  It's the cat/human connection that is why you've probably heard that pregnant women shouldn't clean cat litter boxes; contact with an infected cat's urine can transmit the parasite to a human, and Toxoplasma is associated with birth defects in human infants.

More interesting, though, are its behavioral effects.  In December's post, I described how toxoplasmosis alters the behavior of all three of its main hosts -- it makes cats more affectionate, humans more neurotic, and rats more fearless, all three of which serve the evolutionary function of increasing the likelihood that the pathogen will jump to another host.  (The cats seek out human company; the humans crave the comfort that pets can give; and the rats become unafraid of predators.  In fact, some studies have even shown that infected rats are actively attracted to the scent of cat urine.)

Which is creepy enough.  The idea that a brain parasite is, at least in some respects, in the driver's seat of our emotional state is a little unsettling.  Or maybe I'm only saying that because I've got it myself, having had cats off and on for pretty much my entire adult life.  But I'm not indulging in hypochondria, here; if you've ever owned a cat, especially one allowed outdoors, your chances of having a Toxoplasma infection is nearly 100%.  Kevin Lafferty, a microbiologist who is one of leading experts on Toxoplasma, estimates that there are three billion people in the world who have it.

But now another filigree of "holy shit, that is freaky" has been added to this already bizarre pathogen.  A team made up of Javier Borráz-Léon and Markus Rantala (of the University of Turku), Indrikis Krams (of the University of Latvia), and Ana Lilia Cerda-Molina (of the Instituto Nacional de Psiquiatría of Mexico City) found out that not only does Toxoplasma change our personalities, it changes our appearance.

The idea came from the fact that in other mammals, Toxoplasma can be spread through sexual contact, so there was no reason to believe the same couldn't be true of humans.  The researchers wondered if -- given that the parasite is pretty damn good at engineering its hosts to do things that pass it on -- there might be some way that being Toxoplasma-positive increased your likelihood of having sex.

And hoo boy, what they found.

They took a large test sample of infected and uninfected individuals, and rated them (or had others rate them, as the case may be) for a variety of features -- attractiveness (both self-perceived and as perceived by others), perception of healthiness, number of sexual partners, number of minor ailments, body mass index, mate value, handgrip strength, facial fluctuating asymmetry (i.e. asymmetry in features that change, such as how you smile), and facial width-to-height ratio, all of which could feasibly connect to sexual attractiveness.

Some of the features (like handgrip strength and minor ailment susceptibility) showed no statistically significant difference.  But... well, let me quote you directly from the paper, so you don't think I'm making this up:

[We] found that infected men had lower facial fluctuating asymmetry whereas infected women had lower body mass, lower body mass index, a tendency for lower facial fluctuating asymmetry, higher self-perceived attractiveness, and a higher number of sexual partners than non-infected ones.  Then, we found that infected men and women were rated as more attractive and healthier than non-infected ones...  The present study offers novel evidence supporting the idea that some sexually transmitted parasites such as T. gondii may produce changes in the appearance and behavior of the human host, either as a by-product of the infection or as a result of the manipulation of the parasite to increase its spread to new hosts.

Which is probably why everyone finds me so dashingly handsome, and why my entire adult life I've had to fight off people trying to break down my bedroom door.
(Maybe having toxoplasmosis also makes you more sarcastic, I dunno.)
So.  Yeah.  That's not creepy at all.  Having a brain parasite causes you to look healthier and have a more attractive smile, and makes it more likely you'll get laid.  Who would have thought something that completely bizarre could be real? 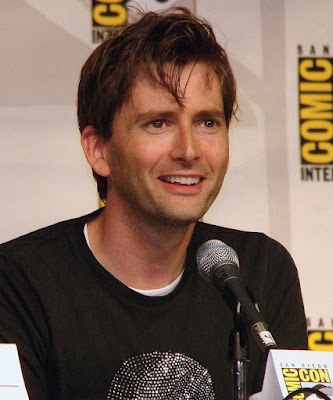 Yeah, look at that smile. I bet you a hundred bucks David Tennant has toxoplasmosis. Maybe it even accounts for his amazing hair. [Image licensed under the Creative Commons Rach from Tadcaster, York, England, 2009 07 31 David Tennant smile 09, CC BY 2.0]
Interestingly, I wrote a short story called "The Germ Theory of Disease" (which you can read for free at the link provided) that riffs on this very idea -- a pathogen that makes you more social.  Unfortunately, it also turns you into a werewolf.  (C'mon, it's me we're talking about here, you had to know there'd be a paranormal twist.)
But hell's bells, I thought it was fiction.
And little did I know that I'm very likely to be carrying around a pathogen myself that does just that.  (Well, not the werewolf part.  I hope.)  Sometimes, as Oscar Wilde pointed out, life imitates art just as much as art imitates life.  Or, to quote Mark Twain, "The difference between reality and fiction is that fiction has to be believable."