Ever heard of the cui bono principle?
Cui bono? is Latin for "who benefits?"  It's been used for centuries as a central question in criminal cases; to figure out who's guilty of a crime, the first thing to determine is who benefitted from it.  But it is also critical to questions of evolutionary biology.  There are behaviors in the biological world that seem unnecessarily risky, or even suicidal, and it's hard to imagine how they'd be selected for.
So... who benefits?
Take, for example, the strange behavior of certain ants.  Ground-dwelling ants, when threatened, usually have one of two responses; rush out and try to sting or bite whatever's threatening them, or move downward (and underground) to hide.  But some ants were observed to have a third, and bizarre, response: faced with a threat, they climb upwards on plant stems, and then just docilely sit there -- and, frequently, get eaten (along with the plant) by herbivorous animals.
The reason for this weird behavior is positively grotesque.  It turns out that the seemingly-suicidal ants were infected with a brain parasite called a lancet worm (Dicrocoelium dendriticum) that, in order to complete its life cycle, has to pass through the digestive tract and liver of a ruminant (sheep, cow, or goat).  So the worm reprograms the ant's brain to make it do something that will ultimately end up with its being turned into lunch.
Too bad for the ant.  But cui bono?  The worm, of course.  It hijacked the ant's brain to make it an unwilling participant in the worm's life cycle.
This is hardly the only example of the cui bono principle, and far from the creepiest one.  Ready to get completely skeeved out?
You may know of the pathogen Toxoplasma gondii in its connection to the recommendation by doctors that pregnant women not clean cat litter boxes.  The pathogen, which is neither a bacteria nor a virus but a protist, is carried by cats and excreted with the urine; and a pregnant woman who contracts toxoplasmosis risks birth defects in her unborn child.
Toxoplasma, however, is found in other animals besides cats, and in fact it was some recent research into hyenas that brought it to mind today.  A study out of the University of Colorado that appeared in Nature Communications a few months ago showed that wild populations of hyenas have a high rate of infection, and the weirdest result is seen in infected hyena cubs.  They, like the unfortunate ants, have a behavioral consequence of infection; they become bold, and seem to lose their perception of lions and other predators as dangerous.  They're far more likely to be killed than healthy, uninfected hyena cubs -- which, of course, benefits the pathogen because it then passes on to the lion.  The pathogen, in essence, is programming its host to engage in behavior that will make it more likely to jump to another host. 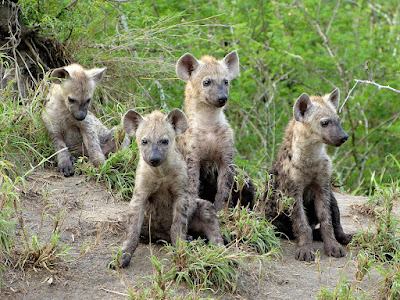 [Image licensed under the Creative Commons New Jersey Birds, Spotted hyena cubs in Limpopo, CC BY-SA 2.0]
So, a weird and gruesome outcome of being infected with a tropical disease, right?  Nothing for us humans to worry about, right?  Well, what you may not know is that there is a significant likelihood that you have toxoplasmosis right now.  In fact, if you have ever owned a cat, the probability stands close to 100%.

A study done a while back by Kevin Lafferty, of the University of California, suggests that as many as three billion people may have a dormant Toxoplasma infection.  Yes, dear readers, you read that right; that's three billion with a "b," as in a little less than half of the human population.  Turns out that Lafferty's research indicated that when you get toxoplasmosis, you get flu-like symptoms for a couple of days, and then the symptoms abate -- but for most of us, the protist goes dormant, and we carry around the parasite for life.

This is creepy enough, but wait'll you hear what it does to you.

Lafferty's research showed that in mammalian hosts, the Toxoplasma organism invades, and becomes dormant in, the host's brain cells.  Not only hyenas become bolder around predators; mice and rats do, as well, aiding in the passage of the germ between rodents and domestic cats.  Lafferty's study, though, goes a step further, and looks at what latent Toxoplasma infection does to humans -- and he found  it seems to cause significant personality changes.

Now, it doesn't make us have a high affinity for cats, which would make sense, and would explain Crazy Cat Lady Syndrome, in which some people think it's normal to own thirty cats, and somehow seem immune to the truly cataclysmic odor that their houses attain.  No, what actually happens is more subtle.  Apparently, if you have Toxoplasma, you're more likely to be neurotic.  People who tested positive for antibodies for Toxoplasma scored far higher on personality assessments in the areas of guilt-proneness, anxiety, and risk of depression.  These effects were so pronounced that Lafferty speculates that it could account for certain differences between cultures.

"In some cultures, infection is very rare," Lafferty said, "while in others, virtually everyone is infected.  The distribution of Toxoplasma gondii could explain differences in cultural aspects that relate to ego, money, material possessions, work, and rules."

I find this speculation fascinating.  The idea that my neuroses might not be due to my genes or upbringing, but because I'm carrying around a parasite in my brain, doesn't create the level of Icky-Poo Factor that you might expect.  Of course, I'm a biologist, and so I'm at least on some level accustomed to thinking about creepy-crawlies.  But the idea that some sort of a microorganism could affect my behavior strikes me as weirdly interesting, particularly since I've had at least one cat in my household for a significant chunk of the past forty years.

So, maybe our personalities aren't as static as we'd like to think -- they can be influenced by a great many circumstances outside of our control.  Add parasite infestations to that list.  And if that whole idea upsets you too much, take comfort in the fact that Lafferty's research has spurred medical researchers to try to find a drug that can destroy the germ.  Nothing's been certified for human use so far, so don't cancel your appointment with your therapist just yet, but there are a couple that are looking promising.  What's uncertain is whether, if the pathogen were eradicated, it would reverse the changes in the brain -- if, for example, nervous, neurotic people would find themselves less anxiety-prone -- or if the alterations in the brain are more or less permanent.  But I, for one, would volunteer to give it a try, once (or if) the medication becomes available.

Until then, you should probably shouldn't worry.  What's a few brain parasites among friends, after all?  In fact, just forget I brought it up.  Relax, go and sit in your recliner, and pet your cat, Mr. Fluffkins, for a while.

You'll feel better.  Trust me.
*****************************************
I've mentioned before how fascinated I am with the parts of history that still are largely mysterious -- the top of the list being the European Dark Ages, between the fall of Rome and the re-consolidation of central government under people like Charlemagne and Alfred the Great.  Not all that much was being written down in the interim, and much of the history we have comes from much later (such as History of the Kings of Britain, by Geoffrey of Monmouth, chronicling the events of the fourth through the eighth centuries C.E. -- but written in the twelfth century).
"Dark Ages," though, may be an unfair appellation, according to the new book Matthew Gabriele and David Perry called The Bright Ages: A New History of Medieval Europe.  Gabriele and Perry look at what is known of those years, and their contention is that it wasn't the savage, ignorant hotbed of backwards superstition many of us picture, but a rich and complex world, including the majesty of Byzantium, the beauty and scientific advancements of Moorish Spain, and the artistic genius of the master illuminators found in just about every Christian abbey in Europe.
It's an interesting perspective.  It certainly doesn't settle all the questions; we're still relying on a paucity of actual records, and the ones we have (Geoffrey's work being a case in point) sometimes being as full of legends, myths, and folk tales as they are of actual history.  But The Bright Ages goes a long way toward dispelling the sense that medieval Europe was seven hundred years of nothing but human misery.  It's a fascinating look at humanity's distant, and shadowed, past.
[Note: if you purchase this book using the image/link below, part of the proceeds goes to support Skeptophilia!]