A commerce in death

My novella We All Fall Down is set during some of the most awful years humanity has ever lived through -- the middle of the fourteenth century, when by some estimates between a third and half of the people in Eurasia died of the bubonic plague, or as they called it, the "Black Death."

Back then, of course, no one knew what caused it.  Not only that the disease came from a microscopic organism, but that it was carried by fleas and spread by the rats that carried them.  The superstition of the time meant that people became desperate to find out why this catastrophe had occurred, and the blame was placed on everything from God's wrath to evil magic by witches, warlocks, and (unfortunately for them), the Jews.

It's natural enough to try to figure out ultimate causes, I suppose, even though they can be elusive.  I tried to express this in words of the narrator of We All Fall Down, the young, intelligent, inquisitive guardsman Nick Calladine, who has found himself entangled in a situation completely beyond his comprehension:

I asked Meg if she would be all right alone, and she said she would.  There were one or two other villagers who had survived the plague, and they were helping each other, and for now had enough to eat.  I wondered what would happen when winter came, but I suppose that their plight was no different from that of many in England.  Some would make it, some would not, and that was the way of things.  We are not given to understand much, we poor mortals.  The religious say that after we die we will understand everything, and see the reasons that are dark to us now, but I wonder.  From what I have seen, things simply happen because they happen, and there is no more pattern in the world than in the path a fluttering leaf takes on the wind.  To say so would be considered heresy, I suppose, but so it has always seemed to me.

The proximal cause of the Black Death -- rats, fleas, and the bacterium Yersinia pestis -- doesn't explain why the disease suddenly caught hold and exploded its way through the population.  One of the more plausible explanations I've heard is that climatic changes were the root cause; the Northern Hemisphere was at the time in the beginning of the "Little Ice Age," and the colder, harsher weather caused crop failure and a general shortage of food.  This not only weakened the famine-struck humans, but it drove rats indoors -- and into contact with people. 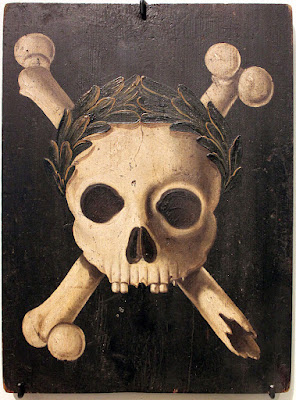 Seventeenth-century "plague panel" from Augsburg, Germany, hung on the doors of houses to act as a talisman to ward off illness [Image is in the Public Domain]

The reason all this dark stuff comes up is that a new study, by a team led by Maria Spyrou of the Eberhard Karls University of Tübingen and the Max Planck Institute, has added another piece to the puzzle.  Using a genetic analysis of bones from a cemetery in Kyrgyzstan, which lay beneath a stone whose inscription indicated they'd died of the plague, Spyrou et al. found that not only did the DNA from remnants of Y. pestis in the bones match those of European plague victims, it matched extant reservoirs of the bacteria in animals from the nearby Tian Shan Mountains.

The onset of the Black Death has been conventionally associated with outbreaks that occurred around the Black Sea region in 1346, eight years after the Kara-Djigach epidemic [that killed the people whose bones were analyzed in the study].  At present, the exact means through which Y. pestis reached western Eurasia are unknown, primarily due to large pre-existing uncertainties around the historical and ecological contexts of this process.  Previous research suggested that both warfare and/or trade networks were some of the main contributors in the spread of Y. pestis.  Yet, related studies have so far either focused on military expeditions that were arguably unrelated to initial outbreaks or others that occurred long before the mid-fourteenth century.  Moreover, even though preliminary analyses exist to support an involvement of Eurasian-wide trade routes in the spread of the disease, their systematic exploration has so far been conducted only for restricted areas of western Eurasia.  The placement of the Kara-Djigach settlement in proximity to trans-Asian networks, as well as the diverse toponymic evidence and artefacts identified at the site, lend support to scenarios implicating trade in Y. pestis dissemination.

So it looks like the traders using routes along the Silk Road, the main conduit for commerce between Europe and East Asia, may have brought along more than expensive goods for their unwitting customers.

Scary stuff.  I hasten to add that although Yersinia pestis is still endemic in wild animal populations, not only in remote places like Tian Shan but in Africa (there have been recent outbreaks in Madagascar and the Democratic Republic of Congo) and the southwestern United States/northern Mexico, it is now treatable with antibiotics if caught early enough.  So unlike the viral disease epidemics we're currently fighting, at least we have a weapon against this one once you've contracted it, and it's unlikely to wreak the havoc now that it did in the past.

At least we are no longer in the situation of horrified bewilderment that people like Nick Calladine were, as they watched their world shattering right before their eyes.  "My father was one of the first to take ill, in July, when the plague came, and he was dead the same day," Nick says.  "My sister sickened and died two days later, her throat swollen with the black marks that some have said are the devil’s handprints.  They were two of the first, but it didn’t end there.  In three weeks nearly the whole village of Ashbourne was dead, and I left alive to wonder at how quickly things change, and to think about the message in Father Jerome’s last sermon, that the plague was the hand of God striking down the wicked.  I wonder if he thought about his words as he lay dying himself at sundown of the following day."

Although we still don't have the entire causal sequence figured out, we've come a long way from attributing disease to God's wrath.  With Spyrou et al.'s new research, we've added another link to the chain -- identifying the origins of a disease that within ten years, had exploded out of its home in Central Asia to kill millions, and change the course of history forever.