Since (surprise!) we've all once again survived the apocalypse, and Saturday September 24, 2022 turned out to be less of a "day to remember" than a "day I've already kind of forgotten," today I'm going to turn to one of my favorite topics, namely: space.

I've been continually wowed by the images coming in from the James Webb Space Telescope.  When it was first deployed, the astronomer and engineers responsible for it told us we were going to be blown away by the quality of the data it would send us, and if anything, that's been an understatement.  We've seen images of astonishing crystal clarity, not only photographs of galaxies further away than anything yet studied but detailed views of objects much closer to home.

It's one of the latter that prompted me to write today's post, because the latest posted image from the JWST is of the planet Neptune.  Just a couple of months ago I did an entire post on how generally weird Neptune is; a lot of our information on it is old, however, having come from the Voyager 2 flyby a little over thirty years ago.  Since then, we've had to study it from farther away, and a lot of what we've learned has raised more questions than answers.

So I was really eager to see what JWST would find out about the eighth planet.  And it's started out with a bang.  Check out this image, showing the planet with its rings and several of its fourteen moons: 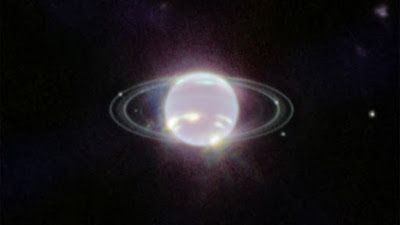 The rings are made of dark material -- this is actually the first time they've been directly observed since Voyager 2 (even the Hubble Space Telescope didn't have the optical resolution to see them).  The bright spots in the atmosphere are clouds of methane ice; the planet itself is not its usual deep cobalt blue because this image was taken in the near infrared range of the electromagnetic spectrum.

I find it deeply inspiring that despite the continuing turmoil down here on Earth, the scientists still have their eyes trained on deep space.  It also keeps us humble, you know?  Even as a child, when I'd look up at the sky through my little telescope, it always gave me a feeling of awe at how majestic, magnificent, and absolutely huge the universe was.

It reminds me of the words of Apollo 11 astronaut Michael Collins, about his experience of seeing the Earth from space: "The thing that really surprised me was that it [Earth] projected an air of fragility.  And why, I don’t know.  I don’t know to this day.  I had a feeling it’s tiny, it’s shiny, it’s beautiful, it’s home, and it’s fragile."

It's a perspective we all should have.