Regular readers of Skeptophilia might recall that about a year ago, paleontologists announced the discovery of a bird fossil from northeastern China that had a long, pennant-like tail -- and that from the extraordinary state of preservation, they were able to determine that the outer tail feathers had been gray, and the inner ones jet black.

Determining feather, hair, and skin color of prehistoric animals is remarkably tricky; the pigments in those structures break down rapidly when the animal's body decomposes, and the structures themselves are fragile and rarely fossilize.  The result is that when artists do reconstructions of what these animals may have looked like, they base those features on analogies to modern animals.  This is why in old books on dinosaurs, they were always pictured as having greenish or brownish scaly skin, like the lizards they were thought to resemble, even though dinosaurs are way more closely related to modern birds than they are to modern lizards.  (To be fair, even the paleontologists didn't know that until fairly recently, so the artists were doing their best with what was known at the time.)

But it does mean that if we were to get in the TARDIS and go back to the Mesozoic Era, we'd be in for a lot of surprises about what the wildlife looked like back then.  Take, for example, the late Jurassic Period fossil found by a farmer in China that contained the nearly-complete skeleton of a birdlike dinosaur.  Here's the fossil itself: 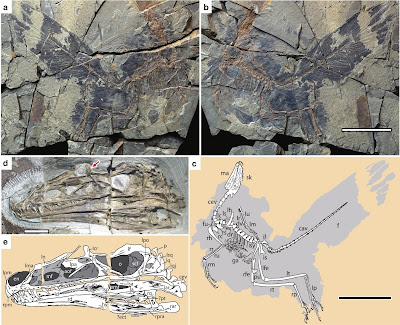 What's remarkable about this fossil is that the feathers were so well-preserved that paleontologists were able to get a close look at the melanocytes -- the pigment-containing cells -- and from the arrangement and layering of those cells, they determined that the dinosaur's head feathers were arrayed like a rainbow, similar to modern hummingbirds, sunbirds, and trogons.

So here's the current reconstruction of what this species looked like: 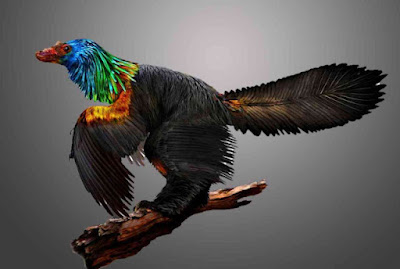 [Reconstruction by artist Velizar Simeonovski, of The Field Museum]

Kind of different from the drab-colored overgrown iguanas from Land of the Lost, isn't it?

The species, christened Caihong juji from the Mandarin words meaning "big rainbow crest," adds another ornate member to the late Jurassic and early Cretaceous fauna of what is now northern China.  And keep in mind that we only know about the ones that left behind good fossils -- probably less than one percent of the total species around at the time.  As wonderful as it is, our knowledge of the biodiversity of prehistory is analogous to a future zoologist trying to reconstruct our modern ecosystems from the remains of a sparrow, a cat, a raccoon, a deer, a grass snake, and a handful of leaves from random plants.

I think my comment about being "in for a lot of surprises" if we went back then is a significant understatement.

Even so, this is a pretty amazing achievement.  Astonishing that we can figure out what Caihong juji looked like from some impressions in a rock.  And it gives us a fresh look at a long-lost world -- but one that was undoubtedly as rainbow-hued and iridescent as our own.