A regular reader of Skeptophilia had an interesting response to a recent post wherein I considered the strong and weak versions of the Anthropic Principle -- the idea that the universe has its physical constants, and thus its overall conditions, fine-tuned to be conducive to the development and sustenance of life.  The Strong Anthropic Principle considers that fine-tuning to be the deliberate dialing of the knobs by a creator of some sort; the Weak Anthropic Principle more takes the angle that of course the constants in our universe are set that way, because if they hadn't been, we wouldn't be here to comment upon it.  The weak version, which has always made considerable sense to me, looks upon the particular values of the physical constants as either being (1) a happy accident, or (2) constrained by some mechanism we have yet to understand (in other words, there's a scientific reason why they are what they are, and they'd be the same in all possible universes, but we haven't yet figured out what that reason is).

The reader picked up on my citing the fine structure constant as an example of one of those perhaps-arbitrary physical constants, and wrote:

Interesting you should choose the fine structure constant as an example, because that's the one that has even the physicists perplexed as to why it has the value it does.  There doesn't seem to be any a priori reason it is equal to 1/137, and it shows up in all sorts of seemingly unrelated realms of physics.  Maybe God is trying to tell us something?  If so, it very much remains to be seen what he's trying to tell us, but it's a curious number to say the least.

See if you can find what Richard Feynman and Wolfgang Pauli had to say about it, if you want a chuckle, albeit a rueful one.

He's not exaggerating that the fine structure constant comes up all over the place.  The usual definition is it is a measure of the strength with which charged particles interact with electromagnetic fields.  The formula for it connects four other physical constants -- the charge of an electron, Planck's constant, the speed of light, and the electric permittivity of a vacuum.  But this is where things start getting odd; because unlike all the other constants in physics, the fine structure constant is dimensionless -- it has no units.  No matter what system of units you're using for the four constituents, everything cancels out and you get a unit-free constant -- 1/137.  (Actually, 1/137.035999206, but 1/137 is a decent approximation.)  You can throw in the speed of light in furlongs per fortnight, and as long as you are consistent and have all the other distances in furlongs and all the other times in fortnights, it doesn't matter.  It always comes out 1/137.

The fine structure constant also shows up in some mystifyingly disparate applications.  It's in the formulae used to determine the size of electron orbits in atoms.  It is used to explain the odd splitting of spectral lines in the emission spectrum of elements, due to electrons with opposite spins interacting slightly differently with the orbitals they sit in.  It shows up in calculations of optical conductivity of solids.  It's used to figure out the probability of an atom absorbing or emitting a photon.  It relates the speed of motion of an electron as it orbits the nucleus to the speed of light. 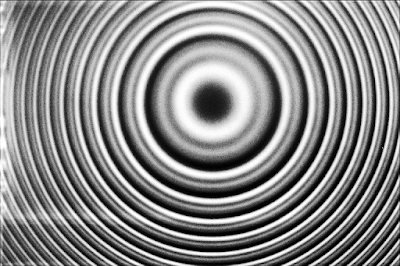 Spectral line splitting in deuterium, one of the first phenomena explained by the fine structure constant [Image licensed under the Creative Commons Johnwalton, Fabry Perot Etalon Rings Fringes, CC BY 3.0]

It pops up so frequently, in fact, that people involved in the search for extraterrestrial life have suggested that if we want to send a low-information-content, compact message out into space that will communicate to any intelligent species that we have reached the age of technology, all we need to do is send a message that says "1/137."

That's how ubiquitous it is.

It's a lucky thing, too -- to go back to the Anthropic Principle arguments -- that it has the value it does.  If it were only a few percent larger, electrons would be so strongly bound by their nuclei that they wouldn't be able to interact with each other to form molecules; a few percent smaller, and they'd be bound so weakly atoms wouldn't form at all, and the whole universe would be a sea of loose elementary particles.

Weirdest of all, the current understanding of the fine structure constant is that it was much higher at the enormous energies immediately after the Big Bang, but then began to drop as the universe expanded and cooled.  It decreased to 1/137 -- and then stopped there.

Why did it stop at that value, and not keep sliding all the way down to zero?

As my reader pointed out, even luminaries like Richard Feynman were deeply perplexed by this number.  In his book QED: The Strange Theory of Light and Matter, Feynman wrote:

There is a most profound and beautiful question associated with the observed coupling constant, e – the amplitude for a real electron to emit or absorb a real photon. It is a simple number that has been experimentally determined to be close to 0.08542455.  (My physicist friends won't recognize this number, because they like to remember it as the inverse of its square: about 137.03597 with an uncertainty of about 2 in the last decimal place.  It has been a mystery ever since it was discovered more than fifty years ago, and all good theoretical physicists put this number up on their wall and worry about it.)

Immediately you would like to know where this number for a coupling comes from: is it related to pi or perhaps to the base of natural logarithms?  Nobody knows.  It's one of the greatest damn mysteries of physics: a magic number that comes to us with no understanding by humans.  You might say the "hand of God" wrote that number, and "we don't know how He pushed His pencil."  We know what kind of a dance to do experimentally to measure this number very accurately, but we don't know what kind of dance to do on the computer to make this number come out – without putting it in secretly!

Wolfgang Pauli was even more direct:

When I die my first question to the Devil will be: What is the meaning of the fine structure constant?