I live only a few miles from the tallest waterfall in the eastern half of North America, which is not Niagara Falls but Taughannock Falls.

Taughannock (for non-locals, pronounced ta-GAN-uck) Falls is sixty-six meters tall, ten meters higher than Niagara.  It is way narrower than Niagara, and has a far smaller water volume even when it gets rainy around here, but hey, a record is a record. 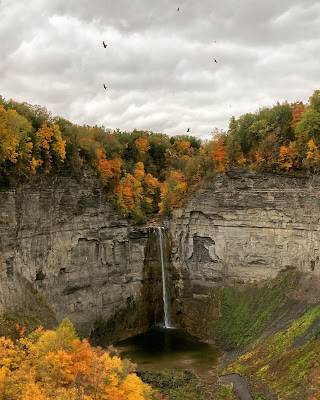 All that gray rock you see surrounding the narrow thread of the waterfall is Devonian-age shale and limestone, sedimentary rocks deposited about four hundred million years ago when this whole area was at the floor of a shallow sea.  Taughannock Creek has gradually cut its way through the layers of rock, creating a hanging valley at the top of one of the gorges this area is known for -- and exposing literally millions of fossils.
Some of the most common fossils you can find in Taughannock Gorge are brachiopods, shelled animals that look to the untrained eye a bit like a clam.  They're only distantly related to mollusks, however -- the internal structure would make that immediately apparent.  Even the shells show the difference, if you know what to look for.  The easiest way to tell is that bivalve (mollusk) shells are symmetrical across the hinge line, and brachiopods are not.  (Whereas brachiopods are symmetrical across the midline of the shell, and most bivalves aren't.) 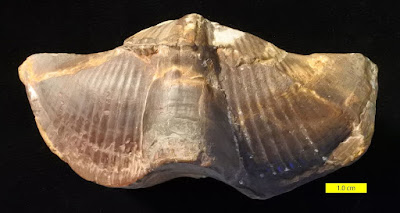 Syringothyris texta, an extinct Devonian brachiopod [Image is in the Public Domain]
Although incredibly common as fossils -- I know a couple of places where you can fill your pockets with brachiopod fossils in under fifteen minutes -- they're quite rare as living animals today.  They got hit hard by the Permian-Triassic Extinction (what didn't?) and never really recovered.  There are about thirty thousand species of brachiopods known to the fossil record, of which only a little fewer than four hundred have survived to the day.  Those survivors aren't common anywhere.  They're mainly deep marine species, animals none of us are going to run into on a daily basis.
But that low modern diversity belies what a dominant group they were back before the End Permian Event wiped out an estimated 96% of life on Earth.  Along with trilobites, they were one of the commonest life forms in the planet's oceans before the "Great Dying" of 252 million years ago destroyed them.
What brings all this up is a paper in Current Biology last week describing a fossil found in China that is a good candidate for the common ancestor of brachiopods and the two other groups of lophophorates -- phoronid (horseshoe) worms and bryozoans (moss animals).  Once again, looks are deceiving; these three groups of animals bear little superficial similarity.  The horseshoe worms are sedentary animals that live in U-shaped tubes, and bryozoans are tiny colonial species that look a bit like miniature corals.  But they are alike in internal structure, and all three have a lophophore, a tube-like feeding structure surrounded with tentacles.  And this newly-discovered species, the early Cambrian Wulfengella, looks like it's the right animal in the right place at the right time to be the ancestor of all three groups. 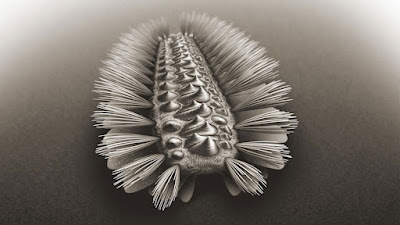 Artist's reconstruction of Wulfengella [Image courtesy of Robert Nicholls, Paleocreations.com]
All of this just goes to show how non-intuitive relationships can be.  Wulfengella doesn't look on first glance anything like any of the three groups it's suppose to be the ancestor to, but its fine structure gives away its kinship.  And it once again highlights how much everything -- the biodiversity, the terrain, the continents themselves -- have changed throughout Earth's history.  We only think things are static because our lives are so short; on the grander scale, the current configurations of the planet will last the blink of an eye.  If you'll indulge me quoting one more time the words of one of my favorite poems, from the eloquent mind of Alfred Lord Tennyson, because I can't think of a better way to close this post:

There rolls the wave where grew the tree.
O Earth, what changes hast thou seen?
There where the long road roars has been
The stillness of the central sea.
The hills are shadows, and they flow
From form to form, and nothing stands --
They melt like mists, the solid lands --
Like clouds, they shape themselves, and go.