Roots of the problem

It's natural enough to think that humans are the only organisms that damage their own habitat.  We certainly seem to be doing a damn good job of it.  But there have been other times living things have sown the seeds of their own destruction.

One good example is the Great Oxidation Event -- sometimes, justifiably, nicknamed the "Oxygen Holocaust."  It occurred just over two billion years ago, and hinges on one rather surprising fact; oxygen is a highly reactive, toxic gas.

There's good evidence that aerobic respiration -- the set of biochemical reactions that allows us to burn the glucose in our food, and which provides us with the vast majority of the energy we use -- evolved first as a mechanism for detoxifying oxygen, and only afterward got co-opted into being an energy pathway.  The problem was that prior to the Great Oxidation Event, all of the organisms had been anaerobes, which are capable of releasing energy without oxygen.  To the vast majority of anaerobes, oxygen is a deadly poison.  That's why when there was a sudden, massive injection of oxygen into the Earth's atmosphere a couple of billions of years ago, the result was that just about every living thing on Earth died.

The tipping point came with the evolution of yet another energetic pathway: photosynthesis.  Photosynthesis was a tremendous innovation, as it allowed organisms to harness light energy instead of chemical energy, but it had one significant downside.  The first part of the reaction chain of photosynthesis breaks up water molecules and releases oxygen.  So when the first photosynthesizers evolved -- probably something like modern cyanobacteria -- oxygen gas began to pour into the oceans and atmosphere.

The survivors fell into three groups: (1) the handful of organisms that had some early form of aerobic respiration as a detoxification pathway; (2) anaerobes that had a way of hiding from the oxygen, like today's methanogens that live in anaerobic mud; and (3) the photosynthesizers themselves.

From the organisms that survived that catastrophic bottleneck came every living thing we currently see around us.

So we're far from being the only organisms that cause ecological problems.  The reason the topic comes up, in fact, is because of another example I'd never heard of until I bumped into a paper in the Geological Society of North America Bulletin last week; the Devonian mass extinctions, which are one of the "Big Five" extinction events that have struck the Earth.  This particular series of cataclysms wiped out an estimated seventy percent of marine species, but it may have been triggered by the evolution of something that seems innocuous, even benevolent.

Plants had only colonized the land during the previous period, the Silurian, enabled to do so by yet another innovation; the evolution of vascular tissue.  The internal plumbing vascular plants have (the xylem and phloem you probably remember from your biology classes) allow plants to move water farther and faster, so they were no longer so tied to living in ponds and lakes.  Plus, vascular tissue in many plants doubles as support tissue, so this facilitated growing taller (a significant advantage when you're competing with your near neighbors for light).

But if you're taller, you're also more likely to topple when it's windy.  So then there's selection for who's got the best support system.  The winners: plants with roots. 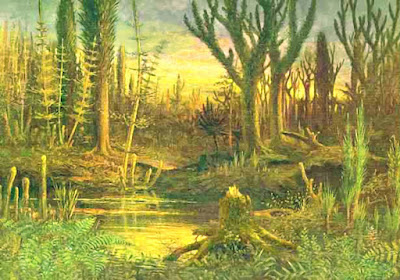 Devonian Forest by Eduard Riou (ca. 1872) [Image is in the Public Domain]

Like vascular tissue, roots are multi-purpose.  They not only provide support and anchoring, they're good at creating lots of absorptive surface area for water and nutrients.  (Some roots are also evolved to store starch -- carrots come to mind -- but that's an innovation that seems to have come much later.)  So now we have a competition between plants for who's got the best supports, and who can access nutrients from the soils the fastest.

Roots very quickly became good at twisting their way into rocks.  You've undoubtedly seen it; tree roots clinging to, and breaking up, rocks, asphalt, cement, pretty much any barrier they can get a foothold into.  When that happened, suddenly there's an erosive force breaking up bedrock and transporting nutrients (especially phosphorus) into plant tissue.  Phosphorus began to leach out of the rock into the soil, and when the plants died all the phosphorus in the tissue was released into rivers, streams, and lakes.

The result was a massive influx of nutrients into bodies of water.

Have you ever seen what happens when chemical fertilizers get into a pond?  It fosters algal blooms, and when the algae dies and decomposes, the oxygen levels plummet and the entire pond dies.

That's what happened during the late Devonian Period -- but planet-wide.

The huge reef-building rugose and tabulate corals and stromatoporid sponges were wiped out en masse.  Other groups, such as trilobites and brachiopods, which depended on the reefs for habitat and food, got knocked back hard as well.

All, the authors claim, because of a nifty innovation in the structure of land plants.

It's tempting to think that the environment is stable; we look around us and think things have always been this way, and will always be this way.  What more of us need to understand is that while the global ecosystem is resilient up to a point, there is always a tipping point.  The scary part is we can pass that point suddenly, without even realizing it.  Then before we're even aware of what's happened, the last chance to turn things around is gone.

The difference between what happened during the Great Oxidation Event and the Devonian Mass Extinctions, and what's happening now, is that back then there was no conscious awareness on the part of the organisms who created the problem and those that were affected.  Now, we have (or should have) the awareness to see what is happening, and enough knowledge to make some smart decisions and halt the self-destructive path we're on.

Let's hope that it's not too late.