The mystery of the Cagots

It will come as no surprise to long-time fans of Skeptophilia that I love a mystery.  And if that mystery is mixed up with questions of ancestry and human genetics, well... that's going to pique my interest but good.

This topic comes up because a couple of days ago I stumbled upon an interesting ethnic minority I'd never heard of -- the Cagots, a distinct group found in northern Spain and southwestern France (the same region where you find high proportions of Basque ancestry -- although they appear to be unrelated).  Like many minorities, they were persecuted by the majority culture, to the point that a separate Cagot culture has all but disappeared, and today people are reluctant to admit they have Cagot ancestry (if they even realize it). 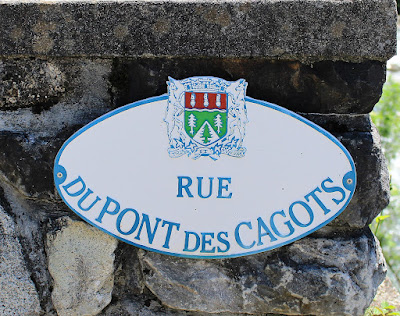 Where it gets really interesting is their origin.  To start with, their name varies by region -- Cagot is the most common, but they've also been called Cagous, Cahets, Gahets, Gafets, Agots, Argotes, Capots, Cacons, Cacous, Caquots, and Caqueux, not to mention about a dozen others.  This makes any kind of linguistic analysis of the name difficult, to say the least.  One idea is that the name comes from the Occitan word caas, meaning "dog," and an old version of the word "Goth" -- and comes along with a suggestion that they are the descendants of the remnants of the Visigoths who were defeated by Clovis I at the Battle of Vouillé in 507 C.E.  Illustrating the truth of the adage that "for every claim there's an equal and opposite claim," others have suggested that they're descended from people who called themselves "hunters of the Goths" -- i.e. the Saracens and Moors left behind after the Battle of Tours in 732 C.E.  Yet another claims they're descended from the Erromintxela, a group of Spanish Roma, thus linking them to another tragically marginalized group.

Typical of persecuted minorities, there hasn't been much in the way of study of these people, and by now most of them have long since been subsumed into the dominant French and Spanish cultures.  But it should be possible to figure this out; for centuries there was "forced endogamy," where Cagots could only marry other Cagots, and they were only allowed to live in self-contained communities on the fringes of towns.  (In a scary parallel to other practices of visually identifying minorities, during the seventeenth and eighteenth centuries, Cagots were required to wear a badge with a pattern of a duck's foot and/or a cloak with a yellow trim.  The reason for the association with ducks and the color yellow is unknown.)  The result of these practices of isolation is that there should be enough genetic distinctness to detect, even if the current descendants are of considerably mixed ancestry.

It immediately got me to thinking about other groups I've read about that are of uncertain origins -- three in the United States that come to mind are the Melungeons of eastern Tennessee and Kentucky and southwestern Virginia, the Brass Ankles of South Carolina, and the Redbones of southwestern Louisiana.  What little genetic study has been done -- and members of all three groups have been understandably reluctant to cooperate with scientists they perceive as being part of the prejudiced majority -- suggests that all of them are "tri-racial," with ancestry from Sub-Saharan Africa, Native American tribes, and Europe.  Members of all three groups were classified as "mulattos" or "Indians" on the nineteenth-century censuses, but census takers back then were notoriously bad about accuracy of data collection on minorities.

So like the Cagots, they are still poorly-studied mysteries with little to no certainty about their origins.

Besides the obviously abhorrent treatment members of these groups received, what's appalling and frustrating about all of this is that the truth is, there is no such thing as ethnic or racial purity.  Which, of course, is the basis of most of these discriminatory practices.  I look pretty solidly White Western European, but my DNA test picked up my ancestry from my Ashkenazi great-great grandfather, something I wrote about not long ago -- and my genealogical research has found ancestors who were Basque, Mi'kmaq, and Abenaki, although they're long enough ago that those didn't show up on my genetic analysis.  If you go farther back still, the concept of race gets even more ridiculous (from a genetic perspective; it obviously has extremely important historical and cultural significance).  All people of western European descent, for example, are thought to have common ancestors as little as a thousand years ago; the same is almost certainly true of other clusters of related ethnic groups.  And there's decent evidence of a genetic bottleneck triggered by a volcanic eruption on the Indonesian island of Toba 74,000 years ago, an event that may have reduced the entire human population of the Earth to around seven thousand people -- the size of a single small village.  If this is correct, those seven thousand people are the ancestors of everyone on Earth, over and over and over, and all of our family trees first branch out and then coalesce to a very narrow set of limbs.

What the racists don't get, and don't seem to want to get, is that the science is incontrovertible; we're all cousins, regardless of whether we look different now.

In any case, I thought the presence of a curious ethnic group in an area to which a large chunk of my mom's ancestry traces its origins was pretty fascinating.  I don't know if I have Cagot ancestry, but it wouldn't surprise me; my mom's forebears in western France were largely poor laborers and peasants.  No way to figure out for certain, though, especially given the paucity of studies on the group.

But it does bring home the fact that the ties that unite us are, in reality, far stronger than the features that divide us.  A lesson that many of us, unfortunately, have yet to learn.