Life inside the snowball

Right now, here in the wilds of upstate New York, it's cold, gray, and snowy.  They say our area has a "four-season climate" -- but usually neglect to add that the four seasons are Almost Winter, Winter, Still Fucking Winter, and Road Construction.

On the other hand, if you know something about prehistory, it could be a whole lot worse, and in fact, has been more than once.  The last continental glaciation in this part of the world, the Laurentide, resulted in an ice sheet that buried the spot where I'm now sitting under three hundred meters of ice, and dug out not only the nearby Finger Lakes but the Great Lakes.  The southern edge of the ice sheet created the Elmira Moraine, only thirty miles south of me -- a moraine is basically the debris left behind when a glacier recedes -- and also Long Island, the sand and gravel soils of which were shoved forward as the ice sheet pushed southward then left in place, much like the pile of snow left when a snowplow backs up (explaining its long, narrow shape).

So I shouldn't complain about the cold.  The era of the Laurentide Glaciation was a lot colder.  And in fact, there have been periods in Earth's history where everyone, not just people like who live in the frozen north, would have been in the icebox.

Our knowledge of this rather miserable time in the far distant past has, like so many discoveries, built by accretion.  In the 1870s and 1880s geologists found evidence of widespread glaciation in strata in Scotland -- then, more puzzlingly, in Australia and India.  Any deep understanding of this was hampered by the fact that back then, scientists thought the continents were firmly fixed in place; continental drift wasn't even first proposed until 1912, and then was soundly rejected until magnetometer data proved in 1958 that the tectonic plates were in constant motion.  The first evidence of a worldwide glaciation -- not just a big one, like the Laurentide -- was uncovered in 1964 by Cambridge University geologist W. Brian Harland, who showed that glacial strata in Svalbard and Greenland had been deposited in tropical latitudes.  Thus demonstrating two rather amazing conclusions in one fell swoop; first, that Svalbard and Greenland had moved a long way, and second, that at the time when they were near the equator, the whole world was covered with ice.

This "Snowball Earth" model has since been demonstrated as accurate in multiple ways.  More than once, but most significantly between 720 and 580 million years ago (i.e. the end of the Precambrian Era), the whole planet was covered with a kilometers-thick sheet of ice.  Picturing what this was like is a little mind-boggling.  The glaciers covered not only the land, but the entire ocean.  Because the liquid water underneath was moving, the ice sheets broke up and ground together, much like the rocky tectonic plates do today, floating on the liquid mantle of the Earth.  Any organisms caught in the cracks of the ice sheet, or between the glaciers and the seafloor, would have been pulverized.  "It’s basically like having a giant bulldozer," said Huw Griffiths, of the British Antarctic Survey, in an interview with Eos.  "The next glacial expansion would have just erased all [traces of life] and turned it into mush, basically."

Griffiths is the reason the topic comes up, actually; he, Rowan Whittle (also of the British Antarctic Survey), and Emily Mitchell (of the University of Cambridge) are the authors of a paper in The Journal of Geophysical Research that looked at the rare fossils that have survived since that time, and have drawn some fascinating parallels to species who survive today in similar conditions -- on the seafloor beneath the Antarctic Ice Sheets:

The timing of the first appearance of animals is of crucial importance for understanding the evolution of life on Earth.  Although the fossil record places the earliest metazoans at 572–602 Ma, molecular clock studies suggest a far earlier origination, as far back as ~850 Ma.  The difference in these dates would place the rise of animal life into a time period punctuated by multiple colossal, potentially global, glacial events...  The history of recent polar biota shows that organisms have found ways of persisting on and around the ice of the Antarctic continent throughout the Last Glacial Maximum (33–14 Ka), with some endemic species present before the breakup of Gondwana (180–23 Ma)...  [D]espite the apparent harshness of many ice covered, sub-zero, Antarctic marine habitats, animal life thrives on, in and under the ice.  Ice dominated systems and processes make some local environments more habitable through water circulation, oxygenation, terrigenous nutrient input and novel habitats...  The recent glacial cycle has driven the evolution of Antarctica's unique fauna by acting as a “diversity pump,” and the same could be true for the late Proterozoic and the evolution of animal life on Earth, and the existence of life elsewhere in the universe on icy worlds or moons.

One group of weird animals they looked at, which apparently thrived in these harsh conditions, were frondomorphs (Phylum Petalonamae), which are thought to have left no descendants whatsoever, and whose alliances to other animals are uncertain at best. 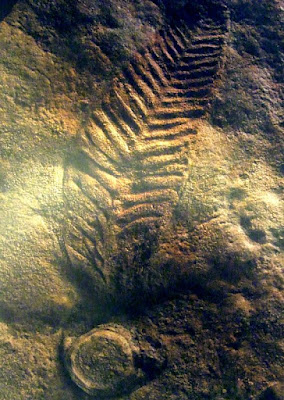 These peculiar beasts were apparently anchored to the seafloor and absorbed nutrients and oxygen from the frigid waters through the feathery bits, but honestly, we know barely anything about how they made a living.  Some may have -- as many Antarctic sponges and sea anemones do today -- been affixed upside-down from the underside of the ice sheet.

These animals, nicknamed "extremophiles" for obvious reasons, just about all died out when things warmed up and the ice finally melted.  But it bears mentioning how long the Snowball Earth conditions persisted -- around 140 million years.  In other words, about the same amount of time as between the end of the Jurassic Period and now.   During that time, there were minor ups and downs, temperature-wise, but that's still a huge expanse of time during which the Earth was an ice-covered wasteland.

When the snowball finally did melt, and the cold-loving extremophiles such as Charniodiscus went extinct, it opened the door for one of the major events in the history of life on Earth -- the Cambrian explosion, when all of the main phyla of animals evolved in a relative flash.  But even when conditions were at their worst, life still survived, somehow.  The fact that life can thrive in apparently hostile conditions improves our chances of finding it elsewhere in the universe, and cheers me up significantly with regards to the weather we're currently having here.

It's also further support for the famous line from the inimitable Ian Malcolm in Jurassic Park: "Life, uh, finds a way."