There are some truly astonishing features of living things that are so familiar we stop even thinking about them, and somewhere near the top of that list are plant roots.

The evolution of true roots, which occurred back in the Silurian Period (444 to 419 million years ago), was a major advance over plants like bryophytes (a modern example is moss) that have only simple, unbranched extensions of the stem to hold them in place.  One of the first vascular plants -- plants with internal plumbing, allowing them to transport materials far more efficiently, and therefore grow much taller -- was Cooksonia, a bizarre-looking leafless plant that was nothing more than a bunch of stems each ending in a bulbous spore-production device.

By the Devonian Period (419 to 359 million years ago), this innovation had spread like wildfire, and plants related to today's ferns, horsetails, and club mosses had pretty much taken over the landscape.  There were still no flowering plants -- those wouldn't show up for another two hundred million years -- but our familiar mental image of prehistoric swamps, thick with giant ferns and conifers, populated by enormous dragonflies and centipedes, isn't so far off from the truth.

The reason this comes up is the recent discovery I learned about from a loyal reader of Skeptophilia, of a fossil site near Gilboa, New York, only a couple of hours east of where I live.  Virtually all of the rock in the southern tier region of New York is Devonian in age, mostly fossil-rich shales and limestones, and in an abandoned quarry paleontologists have discovered the fossils of an intricate (and huge) root network from an ancient forest.

The forest was primarily composed of members of two groups: the genus Archaeopteris, which looked a bit like modern Norfolk Island pines, although much more closely related to tree ferns: 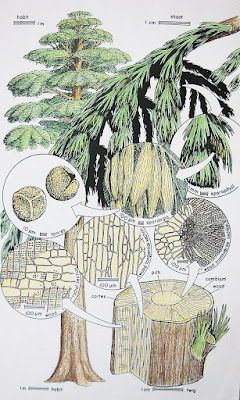 The other were the cladoxylopsids, which look like they were invented by Dr. Seuss: 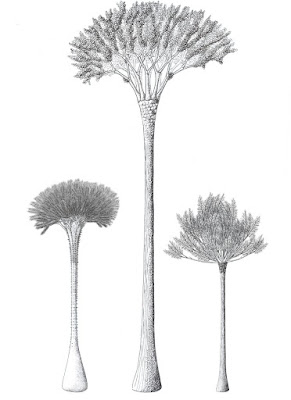 The site is being studied by a team led by paleontologists at nearby Binghamton University, who have thus far mapped over three thousand square meters of this forest extremely primeval.  They have speculated that when it was at its height, 386 million years ago, it extended all the way down into what is now northern Pennsylvania.

"It is surprising to see plants which were previously thought to have had mutually exclusive habitat preferences growing together on the ancient Catskill delta," said Chris Berry, of Cardiff University's School of Earth and Ocean Sciences, who co-authored the study.  "This would have looked like a fairly open forest with small to moderate sized coniferous-looking trees with individual and clumped tree-fern like plants of possibly smaller size growing between them."

This was toward the end of the Devonian, at which point the Earth was heading into a huge warm-up, leading to the sauna-like climate of the Carboniferous swamps.  During the Carboniferous Period, plants kind of took over the place, leading to oxygen levels of perhaps as high as 35% (compared to our current 21%).  The carbon dioxide sucked from the atmosphere and deposited as coal -- coal we are burning today, returning that primordial carbon to the modern air -- was putting gunpowder in the keg, setting up the biggest cataclysm life ever endured.  All through the Carboniferous and Permian Periods, the coal deposition continued, even as the temperature cooled (because of removal of the carbon dioxide).  Then, at the end of the Permian, one of the largest volcanic eruptions ever, the supervolcano that created the Siberian Traps, poured out an unimaginable four million cubic kilometers of basaltic lava.  That molten rock ripped through enormous swaths of buried Carboniferous and Permian coal, blowing all that carbon back into the atmosphere, along with large quantities of sulfur.

The result?  A sudden and massive jump in temperature, a catastrophic drop in atmospheric oxygen, and widespread oceanic anoxia and acidification.  The Permian-Triassic Extinction ensued, during which an estimated ninety percent of species on Earth went extinct.

But when the quarry site was a thriving, fern-filled forest, that was still all in the future.  What is now the maple and oak woodlands of the Catskills was a swampy, lowland thicket of some very strange-looking trees.  Fascinating that sitting here, 386 million years later, we can get a picture of what life was like back then, when the ecosystem was being shaped by one of the most important developments in plant evolutionary history -- roots.