The Cosmic Glass Pyramids of Doom

In yet another example of a fact-free, zero-evidence claim spinning its way around the internet, we now have a story about giant glass pyramids being discovered on the floor of the Atlantic Ocean.  (Source)

These "strange underwater structures... 200 meters high, made of a crystal-like substance" were allegedly discovered from sonar surveying done by a "Dr. Verlag Meyer."  This sent up a red flag immediately, because "Verlag" isn't a first name, it's a German word meaning "publishing house."  But sometimes people have weird names, so I decided to do a quick look, and I could find no scientist named "Verlag Meyer," much less one with any credible links to oceanographic research.  "Dr. Verlag Meyer" seems to be as unreal as the glass pyramids he allegedly discovered.

That hasn't stopped the claim from circulating, of course.  What I find most annoying, however, is the way the sources on this topic pretend that there is all sorts of buzz going on in scientific circles about this non-story:


There are several Western scholars who argue that the pyramid on the seabed may have been initially made on the mainland, after which a devastating earthquake struck and changed the landscape completely. Other scientists argue that a few hundred years ago the waters of the Bermuda Triangle area may have as one of the cornerstone activities of the people of Atlantis, and Pyramids on the sea floor may be a supply warehouse for them. Perhaps it is related to the underwater race of humanoids discovered in Washington State in 2004 - the so called "aquatic ape" beings?

Oh, yeah, all the scientists I know spend their time researching Atlantis, the Bermuda Triangle, and "aquatic ape beings."

And a complete lack of evidence never seems to bother these people.  They're content to blather on as if what they were talking about actually made sense:


There is also a suspicion that the Bermuda triangle and the area where this pyramid was supposedly located may be some sort of "holy grounds" that is being protected by the fabled Atlanteans - that whatever crosses over the location is considered an offering... Others hypothesize that the pyramid can attract and collect cosmic rays, from the so called "energy field" or "quantum vacuum"  and that this may have been used as an Atlantean power plant (or whoever was around at the time). With the mystery still surrounding the Egyptian pyramids and the fact that the pyramidal structures seems to be found in almost all ancient cultures - its going to be hard to tell for certain the origin of this structure or if it truly exists (we haven't been down there yet so...).

Reading this made me shout at my computer, "Do you even understand what a cosmic ray is, you nimrod?"  My computer didn't answer, which I'm taking as a "no."  They have no more understanding of cosmic rays than did the writers of the amazingly abysmal 1960s science fiction show Lost In Space, who appended the word "cosmic" to things to make them seem, well, cosmic.  Like when the wind would blow, knocking over styrofoam rocks and spray-painted cardboard models of scientific apparatus, and Will and Dr. Smith and The Robot would run around waving their arms wildly and yelling, "It's a cosmic storm!  We have to take cover!"  But it never worked, because in the midst of the cosmic storm there would be a cosmic noise ("bwooooyoyoyoyoyoy") and an alien would always appear out of nowhere.  These aliens included a pirate with an electronic parrot, a motorcycle gang, some space hillbillies, a group of alien teenage hippies, and in one extremely memorable episode, Brunhilde (complete with a horned helmet and a cosmic horse).

The pièce de resistance of the glass pyramids article, of course, has to be the illustrations, such as the following: 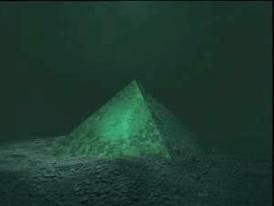 Nowhere does it say that these illustrations are "artist's renditions," so a less-than-careful reader might be led to the conclusion that this was an actual underwater photograph of a crystal pyramid.  Of course, a later illustration might give a critical clue to unwary readers that they weren't looking at photographs: 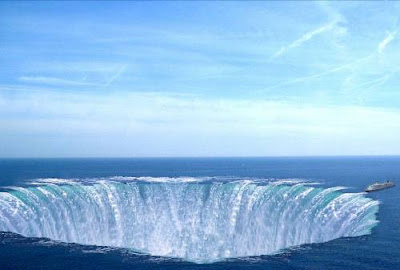 I rather like this one, although the inevitable question of "where is the water going?" does come to mind.  But given that another woo-woo claim is that the Earth is hollow, I'd guess they'd have a ready answer for that one, too.

So, that's our dip in the deep end of the pool for today.  And just to reiterate: there is no credible evidence whatsoever that there are pyramids of any kind, much less glass ones, on the floor of the Atlantic.  Pyramids don't concentrate Cosmic Quantum Vacuum Vibration Frequencies, either, despite what you might have read from such luminaries of the scientific world as Richard C. Hoagland, who also (as you may remember) thinks there are crop circles on Saturn.  I'd like to think that this will put an end to the discussion, and also to people forwarding this around the Internet, although that might be a forlorn hope given that the source article I looked at had been linked, forwarded, and Facebook-liked a total of close to 10,000 times as of the point I found it.  So my feeble efforts are probably going to be as ineffectual as if the cruise ship captain in the above Scientific Photograph shouted "Reverse Engines!"
Posted by Gordon Bonnet at 2:50 AM