When bad things happen, it seems to be a reflex that people look around for someone or something to blame.  And this week, Slender Man (more recently written run together as "Slenderman") is the convenient target.

I've written about Slender Man before, in a post two years ago in which I pondered the question of why people believe in things for which there is exactly zero factual evidence.  And in the last two weeks, there have been two, and possibly three, violent occurrences in which Slender Man had a part.

For those of you who aren't familiar with this particular paranormal apparition, Slender Man is a tall, skinny guy with long, spidery arms, dressed all in black, whose head is entirely featureless -- it is as smooth, and white, as an egg.  He is supposed to be associated with abductions, especially of children.  But unlike most paranormal claims, he is up-front-and-for-sure fictional -- in fact, we can even pinpoint Slender Man's exact time of birth as June of 2009, when a fellow named Victor Surge invented him as part of a contest on the Something Awful forums.  But since then, Slender Man has taken on a life of his own, spawning a whole genre of fiction (even I've succumbed -- Slender Man makes an appearance in my novel Signal to Noise.) 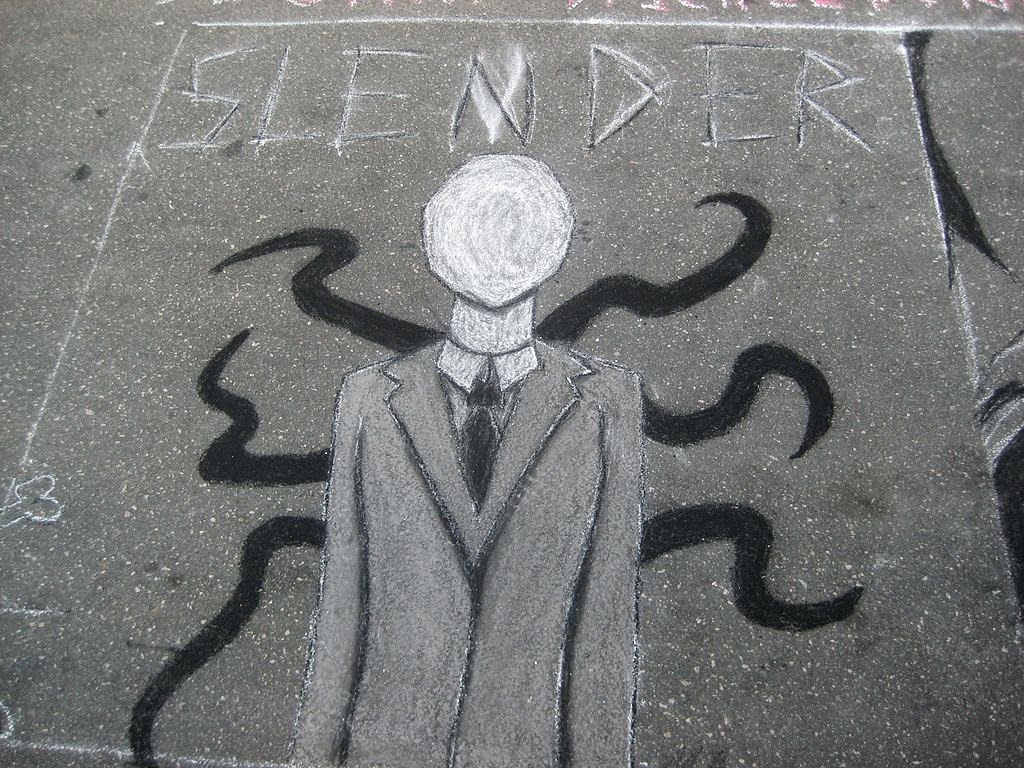 [image courtesy of an anonymous graffiti artist in Raleigh, North Carolina, and the Wikimedia Commons]

But here's the problem.  Whenever there's something that gains fame, there's a chance that mentally disturbed people might (1) think it's real, or (2) become obsessed with it, or (3) both.  Which seems to be what's happened here.

First, we had an attack on a twelve-year-old girl by two of her friends in Milwaukee, Wisconsin, in which the girl was stabbed no less than nineteen times.  The friends, who are facing trial as adults despite the fact that they are also twelve years old, allegedly stabbed the girl because they wanted to act as "proxies for Slender Man" and had planned to escape into Nicolet National Park, where they believed Slender Man lives, afterward.  They had been planning the attack, they said, for six months.

Then, a mother who lives in Hamilton County, Ohio, came home from work a couple of days ago to find her thirteen-year-old daughter waiting for her -- wearing a white mask and holding a knife.  The mother was stabbed, but unlike the Wisconsin victim, escaped with minor injuries.  The daughter was said to have been inspired by an obsession with Slender Man.

Even the shootings two days ago in Las Vegas, Nevada have a connection.  The killers, Jerad and Amanda Miller, were enamored of ultra-right-wing politics and conspiracy theories (allegedly the couple had been part of the Cliven Bundy Ranch debacle, and are fans of Alex Jones); but Jerad Miller had been seen around their neighborhood in costume, including one of -- you guessed it -- Slender Man.

So of course, the links between the cases are flying about in the media, and (on one level) rightly so.  It is a question worth asking, when some odd commonality occurs between such nearly simultaneous occurrences.  But along with the links, there is a lot of blame being aimed at people who have popularized the evil character.

Is it the fault of Victor Surge, or Something Awful, or the site Creepypasta (which is largely responsible for Slender Man's popularity), or Eric Knudsen and David Morales, who administer the Slender Man site on the website, or even of authors like myself who have helped to popularize it?  It's tempting to say yes, because (more than likely) had the girls in the first two cases never come across the idea of Slender Man, it's unlikely they would have committed the crimes they did.  (The Millers clearly had other issues, and Slender Man was hardly a chief motivator for the murders they committed.)

Life, however, is seldom simple, and there is no single source we can point to for the origin of these tragedies.  Nor is there any way we can keep disturbing images and unsettling ideas away from people who are determined to seek them out.  And this is hardly the first time this has happened; Dungeons & Dragons, Magic: The Gathering, World of Warcraft, and various other role-playing games have all been targeted at various times for inciting kids to lose themselves in violent fantasy worlds.  But it needn't be anything even that sketchy to result in obsession.  Back in 2011, a woman in Japan ended up in jail after she discovered that her husband was cheating on her, so she hacked into his online role-playing game and killed his avatar.  The husband was so infuriated that he called the police, who promptly arrested her.

And I still remember -- although I can't find a source online that verifies it -- that in the late 1970s, when the book Watership Down was published, a teenage boy read the book cover to cover and then promptly killed himself.  He left behind a note that his suicide was motivated by his longing to join the world of the book, and he'd become convinced that when he died, he'd be reincarnated as a rabbit.

The sad truth is that even if you remove the triggers -- the role-playing games, the books and movies and online memes with disturbing imagery -- the bottom line is that these are all the acts of people who could not tell fact from fiction, and who (therefore) were dealing with some level of mental illness.  It may be that the girls who stabbed their friend, the daughter who stabbed her mother, and the young man who killed himself over Watership Down would not have committed those acts had they not been spurred to do so by the fictional worlds they had entered.  But the fiction wasn't the root cause.  The root cause was mental illness that (apparently) had never been recognized and treated.

As sad as these acts are, we aren't going to make them go away by eliminating such tropes as Slender Man from our fiction.  For every one we eliminate, there are hundreds of others out there, as disturbing (or more so).  From the Cthulhu mythos of Lovecraft, to the various horror worlds created by Stephen King, to The X Files, to Supernatural and Dexter and Fringe, we are never going to want for scary imagery to draw from.  It would be nice to think that children are being shielded from these until they are old enough to handle them (and I was heartened to see that Creepypasta now has a "Warning to Those Under 18" on their website), but the unfortunate truth is that mental illness is all too common -- and the world is a dangerous place.  And the real question, the one our leaders don't want to face because it's far tougher than simply pointing fingers, is why access to mental health care isn't universal, accessible, and cheap.
Posted by Gordon Bonnet at 2:10 AM