In the last week or so, there's been a sudden rash of claims of discovering alien artifacts on the Moon and Mars.

To which I respond: will you people please get a grip?

It's often hard enough, here on Earth, with the actual item in your hand, to tell the difference between a human-created artifact and an object with entirely non-human origins.  Chance resemblances and oddball natural processes sometimes result in rocks (for example) with strikingly organic-looking appearance.  For example, what do you make of this? 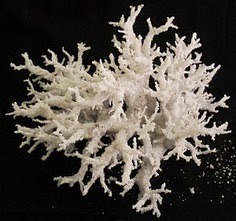 Looks like coral, right?  Or maybe some sort of fossilized plant?  Nope, it's a fulgurite -- a rock that forms when lightning strikes sand.

So chance appearances don't tell you much.  Especially when you are looking at a grainy photograph of the object in question.  And especially when you want very much for there to be something impressive there.

For example, we had a claim a couple of days ago over at the International Business Times that the Mars rover Curiosity had photographed what appears to be a thigh bone.  "None of the National Aeronautic and Space Administration scientists have spoken about it," the article states, with some asperity, "but the news has been going viral."

Well, when you look at the photograph, you'll see why NASA really didn't want to spend their time debunking it: 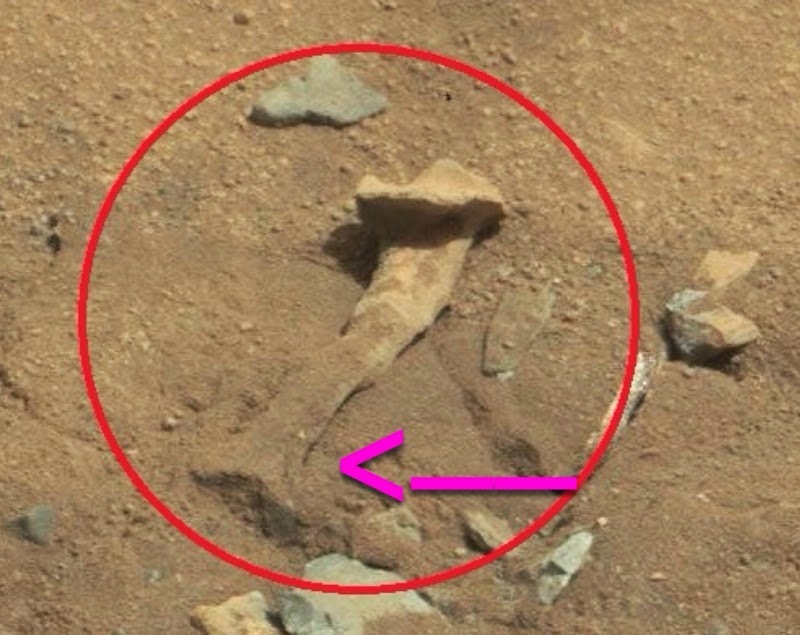 It's a rock, folks.  Being a biology teacher, I know what a thigh bone looks like, and this ain't one.  It's a rock.

Oh, and to the folks over at the IBT: you do not improve your credibility by following up the story on the Martian thigh bone with the statement, "In the past, there have been claims of noticing objects on the surface of Mars like a dinosaur spine, dinosaurs, mysterious light, a toy boat, an iguana, a cat and a half-human and half-goat face."  Just to point that out.

Then, over at The UFO Chronicles, we had Skeptophilia frequent flier Scott Waring claiming that what is almost certainly a digital imaging glitch was "clearly an alien base on the Moon."    Here's the image: 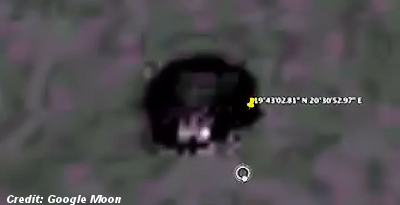 According to Waring, you can see all sorts of things in this, like a wall and the entrance to an underground facility.  Me, all I see is a black blob.  Not the first time that imaging glitches have caused a furor; remember when a glitch in a NASA photograph of the Sun caused all the conspiracy-types to claim that the Earth was about to be attacked by the Borg cube?

Then just this morning, we had another report from Mars over at UFO Sightings Daily that there's an outline of a wolf on the Martian surface.  Here's that one, which made me choke-snort a mouthful of coffee: 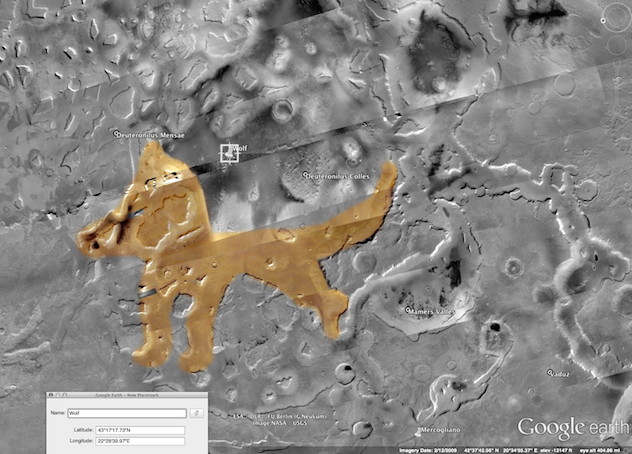 Helpfully colored in so that you can see it.  Sad for Mr. Wolf, however -- he seems to be missing one of his hind legs.  Maybe with the lower gravity, you can get by with three.

So anyway.  I really wish people would stop leaping about making little squeaking noises every time one of the lunar or planetary explorers stumbles on something that has a vague similarity to a familiar object.  Aren't there enough cool real things out there in space to think about?  You have to invent Moon bases, thigh bones, and three-legged Martian wolves?

I'm sticking with the science.  That's always been plenty awesome enough, as far as I'm concerned.
Posted by Gordon Bonnet at 4:32 AM