Following Bigfoot down the wormhole

Today, we turn to the ever-entertaining Nick Redfern over at Mysterious Universe, and an article that appeared yesterday called "Bigfoot: An Inter-Dimensional Entity."

What, you might ask, does "inter-dimensional" mean?  I'm not sure.  Over at Dictionary.com we read the following definitions for the word "dimension:"
I guess "inter-dimensional" is "between two or more definitions on the above list."  So I still have no idea, really, what the hell it means, and I suspect Mr. Redfern doesn't either.  Because in the article itself, we discover that he is of the opinion that Bigfoot's elusiveness has come about because of the Hairy Dude's ability to jump through wormholes. 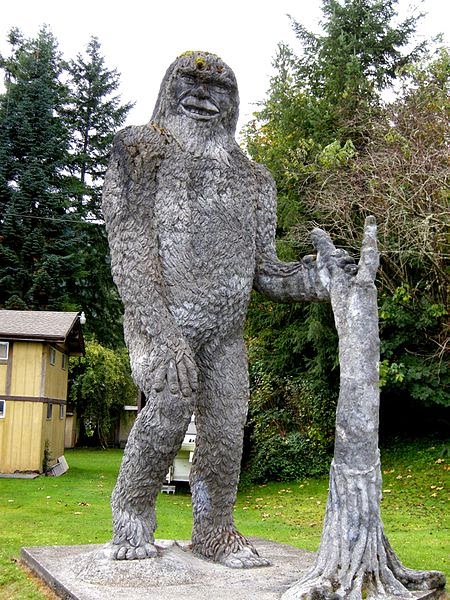 Redfern seems to have picked up the idea from one Ronan Coghlan, a paranormal investigator from Ireland.  Here's Coghlan's take on the whole thing:


Now, how do you get into, or out of, alternative universes?  Well, the answer is quite simple: You have heard of worm-holes, I’m sure?...   Physicists admit there is a possibility that this exists, and it would be like a short-cut, from one universe to another.  Thus, for example, it’s rather like a portal: Something from the other universe would come through it.  Or, something from another planet could come through it... If there are any of these worm-holes on Earth, it would be quite easy for anything to come through, like a Bigfoot, and it’s quite possible any number of anomalous creatures could find their way through from time to time.

I have to admit, of all of the possible manifestations of wormholes I've ever heard of, their being used as means for avoiding capture by elusive North American proto-hominids is probably the last thing I'd have come up with.  But Coghlan and Redfern think that this may also explain Mothman and UFOs, so apparently wormholes aren't the highly theoretical and unproven phenomena that posers like Stephen Hawking think, they're scattered around in the woods of North America as thickly as beer bottles after a college campout.  You have to wonder, if they're that common, how random hikers aren't getting sucked into wormholes every other day, disappearing from the Appalachian Trail and reappearing milliseconds later in, say, downtown Peoria.

But Coghlan admits that wormholes aren't the only possibility for Bigfoot's elusiveness:


I think, looking at a great many legends, folk-tales, and things of that nature, it is possible to vibrate at different rates.  And if you vibrate at a different rate, you are not seen.  You are not tangible.  And, then, when your vibration changes, you are seen, and you are tangible.  Maybe that this has something to do with Bigfoot appearing and disappearing in a strange fashion.

Righty-o.  As far as this goes, which Coghlan describes as "cutting-edge physics, as it were," I can say with some authority that you can make fiddle strings vibrate at a variety of different rates, and one thing that it almost never does is make the fiddle become invisible.  So Coghlan's grasp of actual physics seems to be tenuous at best, and his ideas about why we don't seem to be able to get a hold of an actual Bigfoot are cutting-edge bullshit.

Which may seem a little harsh, but it's a point I've made before: if you're going to use scientific terms to support your argument, you should take the time to learn what the fuck said scientific terms mean.  I mean, it's nice to keep an open mind to strange ideas, and all, but this just strikes me as lazy.