I haven't had forced upon my consciousness the constant undertow members of other groups feel.  The necessity of having to prove oneself constantly in order to be taken seriously at work.  The fear of being in the wrong place at the wrong time, and being under suspicion just because of your skin color or mode of dress.  The demand that you always be able to justify yourself, prove why you have a right to be treated with dignity.  The fact of being unsafe demonstrating affection to the person you love in public.

Being who I am has made it hard not to take those things for granted.  Not that I earned a single one of the privileges I enjoy; coming from the family I did, and receiving the genetics I did, automatically dropped that manna from the sky into my upturned hands.

So the gradual realization that other groups don't have the same automatic entrée into the country club has been painful.  I was also born with a fair share of empathy, so watching the struggles that my African American, Jewish, and LGBT friends go through -- hell, hearing from a female former student that she never puts out of her mind the fear that she might one day be raped -- makes my heart ache.

And it also makes me angry.  Which is why I reacted to an article a friend sent me yesterday with a string of language that I won't print here.

The story, from the site Addicting Info, is called, "Student Group Says Gays Need 'Sensitivity Training' to Be More Tolerant of Bigotry."  In it, we find out about a student group called the Young Americans Foundation at George Washington University, who wants a religious exemption for taking LGBT sensitivity training workshops.

We hear quotes from two spokespeople from YAF, the first one YAF President Emily Jashinsky:


Mandated training is not really being very tolerant of all religious beliefs.  The way that people who are deeply Christian behave is for a reason, and if you’re training them to change that behavior, there’s obviously a problem with that. There's honestly no need for further 'diversity training;' everything here is pretty harmonious.

Which is bad enough, but wait until you hear what the Vice President, Patrick X. Coyle, said:


Why is there not sensitivity training for gay and liberal groups to respect the free speech rights of other groups on campus?  Why has the student association not considered similar training to teach students to respect those who believe in traditional marriage?  The hateful atmosphere that currently exists at The George Washington University will remain as long as the university allows liberal bullies to intimidate and attack students or clubs that dare to express opinions different from their own.

Let me get this straight; you're asking a group whose members can't walk down the street hand in hand with the person they love, who are the subject of legislation targeted specifically at denying them rights that other people enjoy, who are heckled and bullied and subjected to hate speech on a daily basis, to engage in sensitivity training so they can learn how to interact appropriately with wealthy heterosexual white people?

What's next, reinstituting the Jim Crow laws so that people of other races don't get uppity? 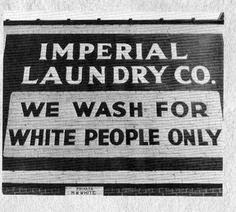 This represents a level of "I don't get it" that boggles my mind.  But it's the same thing that caused more than one person to comment during February (which was Black History Month) and on March 8 (International Women's Day) how terrible it was that we never have a day to celebrate the accomplishments of white males.

You know why that is, you insensitive clods?  Because every single day of the year, we celebrate the accomplishment of white males.  White males never have to fight to be recognized.  We're never asked, "Wow, how did you manage to become an engineer?"  We never hear people comment about how forward-thinking our society is at having a white male President, Governor, Congressperson, Supreme Court Justice.  We never have to prove our right to be in the running, to justify our position in the world.

Because the biggest privilege of all is not having to think about how privileged you are.

People make a big deal about how we should alter public school textbooks to be inclusive, to make sure that history texts aren't just about Dead White Men, that science textbooks laud the accomplishments of women and minorities.  But the enculturation of privilege still underlies the whole enterprise, doesn't it?  The white men are already there in force; the rest have to be inserted, almost as an afterthought, to give us the nice glow of appearing broad-minded.

I'm not saying that such inclusion is wrong, mind you; only that it's the first step, and we're fooling ourselves to believe that by such actions, we're done, that we've counteracted the damage from centuries of unquestioned hegemony.  The fact that people like Jashinsky and Coyle could even ask the question of why sensitivity training was necessary, and their suggestion that LGBT individuals take sensitivity training so that they'll know their place, are particularly offensive reminders of the fact that we have a long way to go.

So maybe it's good that they revealed their attitudes, that they came right out and said what they did.  Maybe we more empathetic privileged people needed a kick in the ass to remind us that however far we've come in the past hundred years, we've still not won this battle.

Maybe it was time for someone to say, "Hey, don't forget, it's still White Heterosexual Male month."
Posted by Gordon Bonnet at 2:54 AM