Racists have cast about for years for some sort of scientific basis for their horrible worldview.  Evidence that their race is the superior one in intelligence, physical strength, or vigor, or simply support for their contention that interracial marriages are bad in a biological sense.

Of course, the problem for people who turn to science is that science often provides answers whether you end up liking them or not.  And inquiries into a biological basis for race have shown that any real genetic variations between different ethnic groups are tenuous at best.  Luigi Luca Cavalli-Sforza, one of the leading specialists in human population genetics, says:


Human races are still extremely unstable entities in the bands of modern taxonomists…  As one goes down the scale of the taxonomic hierarchy toward the lower and lower partitions, the boundaries between clusters become even less clear.  There is great genetic variation in all populations, even in small ones.

From a scientific point of view, the concept of race has failed to obtain any consensus… the major stereotypes, all based on skin color, hair color and form, and facial traits, reflect superficial differences that are not confirmed by deeper analysis with more reliable genetic traits and whose origin dates from recent evolution mostly under the effect of climate and perhaps sexual selection.

Now, let me make it clear that this doesn't mean that there are no differences between racial groups.  It's just that those differences are primarily social and cultural, not biological, which neatly kicks the legs out from underneath some of the racists' primary arguments. 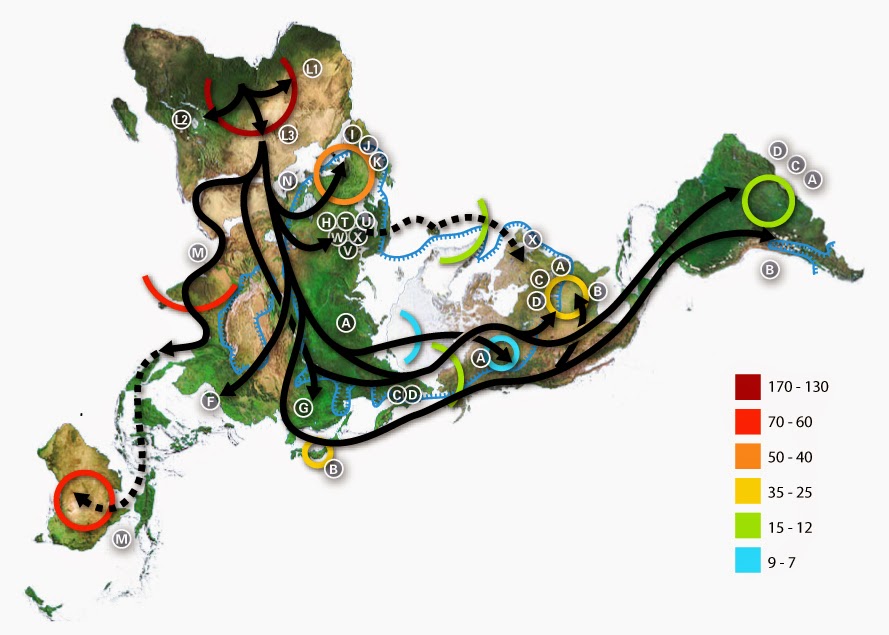 And it's been known for years that lumping together all dark-skinned Africans as "black" is ignoring the fact that there's more genetic variability on the African continent than there is in the entire rest of the world put together.  The Zulu and the !Kung people of southern Africa, for example, are more distantly related to each other than a typical white American is...

And just last month, Iain Mathieson of Harvard University punched another hole in racist genetics when he released his research team's findings that the genes for white skin are only about 8,000 years old.

According to Mathieson et al.:


(M)odern humans who came out of Africa to originally settle Europe about 40,000 years are presumed to have had dark skin, which is advantageous in sunny latitudes.  And the new data confirm that about 8500 years ago, early hunter-gatherers in Spain, Luxembourg, and Hungary also had darker skin:  They lacked versions of two genes—SLC24A5 and SLC45A2—that lead to depigmentation and, therefore, pale skin in Europeans today...

Then, the first farmers from the Near East arrived in Europe; they carried both genes for light skin. As they interbred with the indigenous hunter-gatherers, one of their light-skin genes swept through Europe, so that central and southern Europeans also began to have lighter skin.  The other gene variant, SLC45A2, was at low levels until about 5800 years ago when it swept up to high frequency.

The reason the two light-skin genes took hold in northern latitudes is thought to be vitamin D synthesis -- while having dark skin is an advantage in equatorial regions, from the standpoint of protection from ultraviolet skin damage, dark skin inhibits endogenous vitamin D production in areas with low incident sunlight.  So once the mutations occurred, they spread rapidly, but only in regions at high latitude.  This explains why even distantly-related equatorial groups have dark skin (such as the Bantu and the Australian Aborigines), and even distantly-related high-latitude group have light skin (such as the Swedes and the Inuit).

And apparently the gene for blue eyes is of equally recent vintage.  The earliest genetic evidence for the gene HERC2/OCA2, which causes blue eyes, is in southern Sweden from about 7,700 years ago.  The gene's provenance might date back to 10,000 years ago, but certainly not much before that.

So all of us descend from dark-skinned, brown-eyed people.  Sorry, white supremacists.

Of course, given that there is good evidence that around 70,000 years ago, an eruption of the Toba Volcano in Indonesia caused climate shifts that killed nearly all of our ancestors -- best estimates are that there were only 10,000 humans left on Earth after the bottleneck occurred -- we're all cousins anyway.  After that event, those 10,000-odd survivors can be put into two groups; the ones who left no descendants at all, and the ones who are the ancestors of everyone on Earth.

It'd be nice if we could count on people using science to inform their behavior, but we don't have a very good track record in that regard, do we?  I mean, think about it; we're still pushing the fossil fuel industry as the world warms up and the climate destabilizes around us.  So unfortunately, even when we have direct and incontrovertible evidence that what we're doing isn't reasonable, we usually continue doing it.

And I guess the argument that the genes for white skin are 8,000 years old is going to gain no traction whatsoever with the people who believe that the Earth is 6,000 years old.

But still, it'd be nice, wouldn't it?  Just as the first photographs of the Earth taken from the Moon changed a lot of folks' perspective on our place in the universe, it'd be wonderful if research like this could alter us from "those people... they're not like us" to "we're all one family, and we're all in this together."
Posted by Gordon Bonnet at 2:38 AM