The walls come tumblin' down

If you needed any further evidence that homeopathy is complete lunacy, take a look at this page wherein we find the description of a homeopathic "remedy" made from chunks of the Berlin Wall.

At first, I thought this was a spoof.  Tragically, it isn't.  But if you would rather not (1) give these people further hits on their hit tracker, and (2) subject your delicate brain cells to truly devastating amounts of derp, allow me to give you a brief summary.

Kees Dam, the person who wrote the piece, states that he (at least I think this is a male name; my apologies if I'm incorrect) was at a homeopathy conference and heard a homeopath named George Vithoulkas say that "the sake and credibility of homeopathy was not served by using remedies like Berlin Wall."  And initially, Dam agreed.  It seemed ridiculous that taking a chunk of concrete, grinding it up in water, and diluting it until there was none of the original concrete left would result in a remedy that was good for curing anything except thirst. 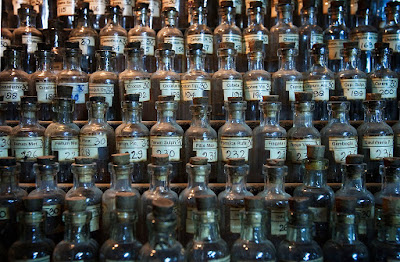 [image courtesy of photographer Jorge Royan and the Wikimedia Commons]

But despite his doubts, Dam decided to "prove" it for himself.  In homeopathy, a "proving" is where you give volunteers undiluted materials (here, swallowing pieces of the Berlin Wall) and seeing what symptoms they develop.  Those symptoms then are what highly-diluted "remedy" (a.k.a. "water") is useful for treating.

It is why, for example, the homeopathic "remedy" used for insomnia is made from diluted caffeine.  I'm not making this up.

Anyhow, after eating powdered concrete, there were a bunch of emotional symptoms -- depression, hopelessness, feelings of being trapped -- and a variety of physical symptoms as well.  These included both narcolepsy and insomnia.

Which induced me to shout at my computer, "Okay, which is it?  It can't be both."

So will powdered and diluted Wall keep you awake, or put you to sleep?  The website was unclear on that point (one of many that it was unclear on).  Maybe it will put you into that obnoxious half-awake state where you can't really fall deeply asleep, but you're too tired to get up.

If that's what it does, keep it right the hell away from me.  I hate that.

Anyhow, we then move on to a long list of quotes from volunteers who participated in "provings" and tests of the "remedy" itself.  Many of them are what you'd expect from people who believe this stuff -- claims that taking homeopathic dilutions of the Berlin Wall helped you with metaphorical walls in your life ("Sensation as if there is a wall, an incredible distance between the people I really love and me. I cannot go to the people I really want to be with. It is a big suffering.").  Another person said that taking it made her very suspicious of men ("Absolutely no sex," she says.)

The most bizarre one is someone who got symptoms simply by holding the "remedy" in her hand: "Holding the remedy for a while gives a tremendous rise of grief and sadness, so huge you would drown in it."

So what does this mean, now you don't even have to swallow the stuff, it's equally effective to absorb the curative powers directly through your skin?  I suppose that's true, actually, given the fact that 0 = 0.

It only gets weirder from there.  Here are a few more symptoms people developed after swallowing pieces of the Berlin Wall:
Apparently after reading through all of this (for want of a better word) data, Dam didn't have the reaction I did, which is to say "What the fuck?" over and over again.  No, Dam was convinced.  Any of his previous reservations about the usefulness of diluted Berlin Wall were clean gone.  He writes:

So there you have it.  This isn't the stupidest thing I've run across in homeopathic literature; that honor goes to homeopathic water, which is water diluted in water.  (I'm also not making this up; the link is to a previous Skeptophilia post where you can read all about it.)  However, if this isn't the dumbest "remedy" I've ever seen, it is certainly the strangest.

Anyhow, if you have a chunk of the Berlin Wall, you're probably better off hanging onto it and not grinding it up and diluting it a bunch of times.  Since what it apparently cures are things like craving salami and imagining that there are heaps of sand in front of your house, it probably wouldn't that useful in any case.
Posted by Gordon Bonnet at 2:37 AM