A fight over decals

One of my guiding principles in life is "Don't be a dick."

I don't mind taking on battles when I need to, or when I think the outcome is sufficiently important; but I truly don't understand people who do choose to do things solely to piss others off.  What are they getting out of this?  At the end of the day, I do not judge how good a day I had, or how happy I am, based on the number of total strangers whose cages I rattled.

But to me, that seems like the only possible reason for the recent rash of police and fire departments slapping decals with crosses and "In God We Trust" all over their vehicles.  It's happened in Baytown, Texas; Youngsville, Louisiana; Covington, Louisiana; Cedartown, Georgia; Bay County, Florida; and Stone County, Missouri.

And those are only the ones in the last couple of months.  It's spreading like wildfire, and has generated more than one lawsuit by the Freedom From Religion Foundation, the most recent in Brewster County, Texas.

Most of the arguments you hear against the practice are that the decals imply two things.  First, that the decals are a sly way of hinting that anyone who is an agnostic or atheist (or a practitioner of another faith; no one's in any doubt about which god the slogan's referring to) is liable not to receive the same police protection as Christians do.  The second is to ask how non-Christian police officers might feel about having to ride around in a squad car with a Christian religious slogan on the side.  These are government-owned vehicles, and therefore paid for by taxpayers, Christian and non-Christian alike.  The idea that these vehicles are emblazoned with a decal promoting religion -- worse, one particular religion -- is an unfortunate reminder about policies regarding inclusion, tolerance, and equality. 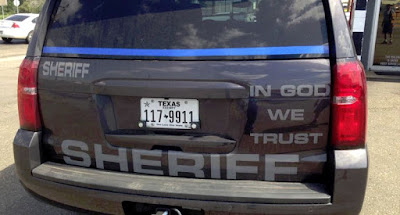 And I certainly agree with all of that.  But the question no one seems to ask is why these decals should be on the vehicles in the first place.  What is the argument for why they're necessary?  If you claim that without the decal, god wouldn't protect the cops in the car, then all I can say is that you have a pretty odd conception of how a benevolent deity might be expected to behave.  If it's patriotism, there are many other patriotic slogans you could choose.  So what purpose do they serve?

What purpose, in fact, does "one nation, under god" in the Pledge of Allegiance serve?  Or "In God We Trust" printed on our money?  No one's saying you can't paint bible quotes on the roof of your privately-owned house if you want.  Or, like a farmer who lives near me, post signs with cheerful slogans like "The Wages Of Sin Are Death" along the highway.  But these are government-sponsored, government-endorsed declarations of religion.  Why do the religious feel compelled to promote religion on the sides of police cars and fire engines -- and on our money?  Why is it moral to require students in every public school in America to recite a Pledge every morning that forces non-Christian students either to refuse to say it (sometimes at the cost of punishment and humiliation), or to lie publicly about their beliefs?

The only good answer I've been able to come up with to this question is: the Christian majority, i.e. the people who make the laws in this country, do it simply because they can.  If it pisses people off -- well, that's just too bad.  In fact, some of the most vocal proponents of the religious decals on police cars seem to be happy that they're making people mad.  Take, for example, Police Chief Adrian Garcia of Childress, Texas, who was told he risked a lawsuit from the FFRF for his decision to put big decals saying "In God We Trust" on the backs of his squad cars.

"They can go fly a kite," Garcia said.

So it boils down to people who really don't care if what they do excludes, devalues, or angers other American citizens, doing something because they're in a position of power so formidable that no one can stop them.  Further evidence that the much-talked-about-on-Fox-News "war on Christianity" in the United States is complete horseshit.

But it's a position I really don't get.  Like anything, political correctness can get out of hand, and there will always be people who will get their knickers in a twist over nothing.  But deliberately setting out to marginalize a significant percentage of Americans for no good reason, at the public expense?

That is called "being a dick."
Posted by Gordon Bonnet at 2:14 AM