A win for anti-woo

I so often write about topics that make me (and at least some of my readers) want to do repeated headdesks that it's nice to have an opportunity to write about something where the good guys came out ahead.

I'm referring to the decision by Robert DeNiro, co-founder of the Tribeca Film Festival, to pull anti-vaxxer Andrew Wakefield's film Vaxxed from being shown at the festival.  DeNiro said:


My intent in screening this film was to provide an opportunity for conversation around an issue that is deeply personal to me and my family.  But after reviewing it over the past few days with the Tribeca Film Festival team and others from the scientific community, we do not believe it contributes to or furthers the discussion I had hoped for.

The Festival doesn’t seek to avoid or shy away from controversy.  However, we have concerns with certain things in this film that we feel prevent us from presenting it in the Festival program.  We have decided to remove it from our schedule.

Given that the premise of the film is antiscientific horseshit, I and other folks who value evidence and logic over hysteria and misinformation applaud his decision.  Said David Gorski, over at Respectful Insolence:


Freedom of speech means that Andrew Wakefield and anyone he’s conned “persuaded” into believing his pseudoscience can make whatever sort of propaganda film they want, provided they can find the resources to do so.  It also means that the Tribeca Film Festival can screen that same pseudoscientific antivaccine (but I repeat myself) propaganda film if its organizers so desire.  However, it also means that journalists and, yes, bloggers can criticize Tribeca for its decision, refute Andrew Wakefield’s long history of promoting antivaccine misinformation about the MMR, and pre-emptively demolish the conspiracy theory at the heart of Vaxxed.  That’s not “censorship.”  It’s just more speech.

Which is it exactly.  But given that it's conspiracy theories that started the anti-vaxxer movement in the first place, it's not to be wondered at that DeNiro's decision immediately unleashed a screeching horde of anti-vaxxers who claim that Big Pharma had threatened DeNiro into pulling the film.  Even less surprising is that the charge was led by none other than Mike "The Health Ranger" Adams, of Natural News:


To try to strong-arm De Niro into pulling the film, intense shaming pressure was brought to bear against Robert De Niro by the vaccine totalitarians, who told De Niro this documentary was so dangerous that no one should ever be allowed to see it.  Vaccine safety, they insist, can’t even be allowed to be DEBATED, they insist!  Only one side of the debate may be seen by the public, and that one side must be the 100% pro-vaccine side which ridiculously claims that “the science is settled” even when no one is allowed to see the science they don’t want you to see.

"The science they don't want you to see."  Better known as "discredited studies that have been replicated over and over with no results."

Of course, Adams defines "science" as "whatever agrees with my preconceived notions," so this is a distinction I wouldn't expect him to make.

But he's not done with his ranting yet:


De Niro discovered that even declaring yourself to be pro-vaccine isn’t enough to appease the vaccine totalitarians.  The mere granting of any public platform to this explosive document is very nearly a crime in the eyes of the corrupt, fraudulent vaccine industry and all its arrogant zealots.

As more pressure was brought against De Niro for defending the free speech of what might be one of the single most important documentaries of our modern age, he caved.  He pulled the film from Tribeca, participating in the censorship that was demanded by the vaccine totalitarians.  The film’s page on Tribeca was also memory holed — it used to be found at this link — and De Niro felt compelled to issue a follow-up statement today that appeases the demands of the vaccine fundamentalists.

"Vaccine fundamentalists."  Or, as the rest of the world calls them, "medical researchers." 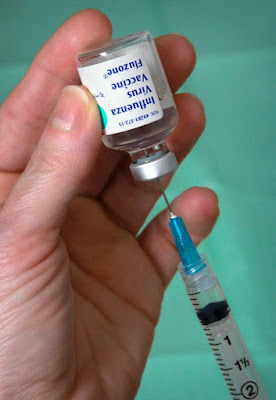 It would take a stronger man than I am not to indulge in a little bit of schadenfreude over Adams's apoplectic rage.  Too often the decision goes the other way -- indulging the anti-science types because they tend to shriek the loudest.  The fact that DeNiro has swayed in the other direction should be heartening.  DeNiro has an autistic son himself, and has gone on record as indulging in some sympathy toward the anti-vaxx movement -- showing that dealing with difficult situations can lead people in either direction, toward considering evidence-based solutions or gravitating to irrational ideas out of desperation.  Not being in his shoes, I can't imagine what it's like, but it's a positive sign that he's taken a step toward rationality.

Of course, Adams isn't gonna see it that way.  To him, it's just one more Big Pharma conspiracy.  To which I say: give it a rest, dude.  The good guys won this time.
Posted by Gordon Bonnet at 2:47 AM