Today from the Unintentionally Hilarious Department, we have a paper that made its way into PubMed that has the title, "Pharmacoeconomic Comparison Between Homeopathic and Antibiotic Treatment Strategies in Recurrent Acute Rhinopharyngitis in Children." 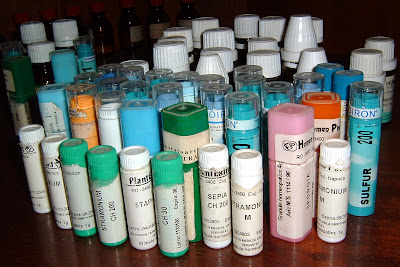 Here's a quick summary of the objectives and results, as quoted from the abstract:


Objectives: A pharmacoeconomic study to compare, in terms of: medical effectiveness, quality of life and costs two treatment strategies ('homeopathic strategy' vs 'antibiotic strategy') used in routine medical practice by allopathic and homeopathic GPs in the treatment of recurrent acute rhinopharyngitis in 18-month to 4-year-old children.

What makes this hilarious is that the authors of the article, Melanie Trichard, Gilles Chaufferin, and Nicolas Nicoloyannis, are apparently unaware that because acute rhinopharyngitis (better known to most of us as a "cold") is viral in origin, antibiotics are entirely useless for fighting it, and no competent doctor would prescribe them in this situation for a child or for anyone else.  So saying that homeopathic "remedies" are as good for fighting colds as antibiotics is akin to the following claims:
The maddening thing is that you can still find homeopathic "remedies" (i.e., pills or liquids with no active ingredients) being sold for lots of money on pharmacy shelves, despite study after study showing that they are worthless.  The most recent study, just last year, generated the following conclusion:


The review found no good quality, well-designed studies with enough participants to support the idea that homeopathy works better than a placebo, or causes health improvements equal to those of another treatment.

Although some studies did report that homeopathy was effective, the quality of those studies was assessed as being small and/or of poor quality. These studies had either too few participants, poor design, poor conduct and or [sic] reporting to allow reliable conclusions to be drawn on the effectiveness of homeopathy.

According to CEO Professor Warwick Anderson, “All medical treatments and interventions should be underpinned by reliable evidence. NHMRC’s review shows that there is no good quality evidence to support the claim that homeopathy works better than a placebo.”


[The] pattern is now clear – gold standard clinical evidence shows that homeopathy does not work. Homeopaths do not respond by either producing high quality evidence of efficacy or by changing their views to account for the evidence.  Rather, they whine about the game being rigged against them and try to change the rules of evidence, so that weak studies that are almost guaranteed to be false positive are used, or studies that are not even designed to test efficacy...

For some reason we cannot summon the political will to do what reason demands (and what multiple systematic reviews by government bodies have recommended) and finally expel homeopathy from modern health care.

Still there are researchers, either because they are true believers or just naive, calling for yet more research into homeopathy, such as the proposed Toronto study of homeopathy for ADHD.  The demand for more research will never end.  The public, however, should no longer support this profound waste of resources.

What is amazing is that the homeopaths themselves won't admit that the game is up.  How many failed studies do they need?  I realize that this would mean they were out of a job, but for cryin' in the sink, at what point do you say, "Okay, I guess I was wrong?"

I guess the answer to the last question is, "Never."  "Death before admitting we're ripping people off by selling them useless remedies," that's the motto of the homeopaths.  Anyhow, I'm done here.  I've got to go clean my windows.  The last time didn't work out so well.
Posted by Gordon Bonnet at 1:58 AM