As a diversion from less cheerful subjects like what is currently happening in Washington, D. C., today we will consider: the Gates of Hell.

The interesting thing about the whole concept of hell is that it's connected to Christianity, and yet there's not much of a mention of it in the bible.  The Old Testament version, Sheol, was not really the traditional flaming inferno; it was more of a gray, dreary place cut off from hope and light, sort of like Newark but with less traffic.  The concept of a fire-and-brimstone version of hell doesn't seem to come up until the New Testament, for example Matthew 10:28 and Mark 9:43, where we are introduced to such fun notions as "the fiery furnace" and "unquenchable fire" into which you get pitched if you break the Ten Commandments and commit the Seven Deadly Sins, unless you're also a billionaire fast-talking con man, in which case you get elected president of the United States instead.

Wait, I said I was going to keep this post apolitical.  My bad.

Because of the mention of fire, there's been a picture developed that hell is a hot place underground, which has of course connected it in some people's mind with volcanoes and other subterranean phenomena.  There are a variety of places on Earth that have been considered possible candidates for gates to hell, three of which I describe below.

First, we have the Batagaika Crater in Siberia, which locals have nickname the "Hellmouth."  It's a pretty impressive feature, to be sure: 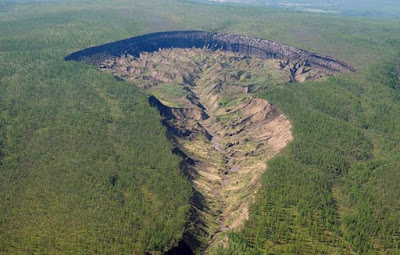 At its widest, it's a kilometer across and 87 meters deep, and is getting bigger.  The crater has nothing to do with hell, though, unless you're talking about the manmade hell we're creating by ignoring the human causes of climate change; it's something geologists call a megaslump, when removal of groundwater and thawing of permafrost cause massive subsidence.  So it's pretty awful, but doesn't have much to do with the punishment of the damned.

A second candidate is the Necromanteion of Baiae, a tunnel system near the city of Naples which apparently hosted a magical oracle who was supposed to be able to communicate with the spirits of the dead.  She would enter the tunnel, breath the magical vapors, and come back and tell the locals what the dead had to say for themselves, which mostly was confusing, garbled nonsense, that the oracle's handlers then got to interpret whatever way they wanted. 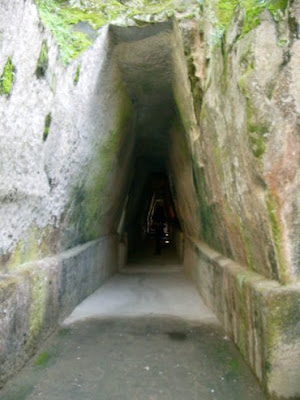 What the dead probably should have told the oracle was "it's a stupid idea to breathe magical vapors in an area of high volcanic activity," because the gases coming out of the tunnel were high in sulfur dioxide and hydrogen sulfide, both of which are quite toxic, and explain her confusion without any magical explanation needed.  Baiae is near the Campi Flegrei, or burning fields, an area of fumaroles and boiling mud pits that illustrate that Mount Vesuvius didn't exhaust its capacity for violence when it destroyed Pompeii in 79 C. E.

Last, we have Darvaza, in the Karakum Desert of Turkmenistan.  Like Batagaika, Darvaza is due to the actions of people -- in this case, a natural gas drilling facility that went very, very wrong.  At some time in the 1960s -- given that we're talking about the Soviets, here, there's no certain information about precisely what happened when -- the ground collapsed underneath a gas-drilling rig, and during the collapse the methane seeping from the walls of the crater ignited.  People expected that it'd burn itself out quickly. 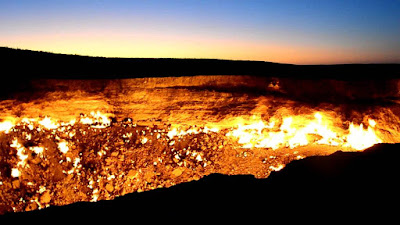 Darvaza is still burning today, and has become a tourist attraction for travelers who don't mind the fact that (1) it reeks of sulfur, (2) if you stay there long enough, the fumes will make you violently ill,  and (3) there are no amenities for miles around.  But if you're an adventurous sort, it's certainly something you won't see anywhere else on Earth.

So that's a trio of candidates for being the doorway to hell.  If none of these float your boat, however, there are actually dozens of others.

And that's not even counting Newark.
Posted by Gordon Bonnet at 3:28 AM