Okay, after some recent posts that fall into the "I don't want to live on this planet any more" category, time to go to my happy place, namely: some cool recent science news.

First, we have a study of "starquakes" -- turbulence in the outer layers of stars -- giving us information about the conditions in the gas clouds from which those stars formed millions of years ago.

A study of 48 stars in a cluster in the Milky Way, which condensed from the same gas cloud, showed that their rotational axes are all aligned.  According to Dennis Stello, of the University of New South Wales, it had been assumed that chaotic forces in the primordial gas cloud would have scrambled the stars' angular momentum, and made it impossible to determine that they had come from the same origins.  "Just as seismologists use earthquakes to understand the interior of our planet, we use starquakes to understand the interior of stars," Stello said.  "Our new study provides the first evidence that this approach is a powerful way to gain insights into processes that occurred billions of years ago, close to the beginning of the universe."

What has been learned from this study has the potential of extending further back in time what we can infer about the conditions that exist as stars are being formed.  "The benefit of studying ancient star clusters is that the interfering dust and gas has gone, yet the stars still preserve the signature of the initial conditions in the cloud where they were born," Stello said.  "Our finding that the spins of about 70 per cent of the stars in each cluster are strongly aligned, and not randomly orientated as was expected, tells us that the angular momentum of the gas and dust cloud was efficiently transferred to the new stars.  It’s remarkable that the imprint of these initial conditions can still be seen billions of years later, by studying tiny oscillations in stars that are many light years away."

From the world of biology, we have a study from scientists at the University of Basel (Switzerland) and Lund University (Sweden), wherein we find that the most efficient and beneficial predators in the world are... spiders.

Using statistical sampling techniques, a team of zoologists has calculated the mass of the prey consumed by spiders, and found that the 45,000-odd species of spiders worldwide consume between 400 and 800 million tons of prey a year, many of which are insects that have the potential of damaging crops or spreading disease.

"Our calculations let us quantify for the first time on a global scale that spiders are major natural enemies of insects. In concert with other insectivorous animals such as ants and birds, they help to reduce the population densities of insects significantly," said Martin Nyffeler of the University of Basel, who was lead author of the study.  "Spiders thus make an essential contribution to maintaining the ecological balance of nature."

So think about that next time you see a spider in your house and are torn between squashing it or scooping it up and putting it outside. 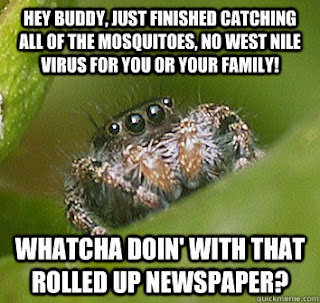 Then, from the paleontologists, we have a discovery in India that pushes back the fossil record of the earliest photosynthesizing eukaryotes -- better known as algae -- by 400 million years.

Not only did a team of scientists led by Stefan Bengston of the Swedish Museum of Natural History identify 1.6 billion year old single-celled fossils from dolomite formed in shallow marine environments in what is now the Vindhyan Basin in central India, they were able to use a highly accurate scanning technique -- synchrotron-radiation X-ray tomographic microscopy -- to see the cellular machinery therein.

So yes: they took a look at the organelles in the cells of a 1.6 billion year old fossil.

And inside it were all of the familiar subcellular bits you learned about in high school biology, indicating that these were indeed eukaryotes (organisms with membrane-bound structures such as nuclei) instead of the more primitive prokaryotes (organisms that lack most cellular organelles, and which include bacteria).  The upshot: complex life has been around a lot longer than anyone realized.

Last, from medical research, we have a groundbreaking study of brain/body computer interfaces led by Ujwal Chaudhary of the Institute of Medical Psychology and Behavioral Neurobiology at the University of Tübingen (Germany) which allowed patients with locked-in syndrome to answer questions yes or no -- just by thinking about it.

Locked-in syndrome, which is top of my list of disorders I wouldn't wish on my worst enemy, occurs when because of an injury, stroke, or neurodegenerative disease (like ALS) a person becomes completely unable to move, but without any loss of cognitive function.  In other words, you are aware but trapped inside a totally unresponsive body.  This condition was brought into the public eye by the phenomenal book (later made into a movie) The Diving Bell and the Butterfly, by Jean-Dominique Bauby, who developed LIS after a massive stroke, but who eventually was able to communicate through eye movements well enough to write a memoir of his experience.

Which is only the first step toward a brain/computer interface that might allow them to do much more -- at least allowing them to communicate despite having a condition that otherwise would shut them off completely from the world around them.

So there you are.  Some interesting news from science.  I don't know about you, but I feel much better now.  It's nice to know that despite the lunacy in the world, there are still people who are working toward improving our understanding of the universe.

And I, for one, find that very heartening.
Posted by Gordon Bonnet at 2:13 AM