One of the political trends I understand least is the increasing distrust of scientists by elected officials.

It's not like this disparagement of experts is across the board.  When you're sick, and the doctor runs tests and diagnoses you with a sinus infection, you don't say, "I don't believe you.  My real estate agent told me it sounded like I had an ulcer, so I'm gonna go with that."  When you get on an airplane, you don't say to the pilot, "You damn elite aviation specialists, you're obviously biased because of your training.  I think you should hand over the controls to Farmer Bob, here."  When you have your car repaired, you wouldn't say to the mechanic, "I'm not going to do the repairs you suggest, because you have an obvious monetary interest in the car being broken.  I'll get a second opinion from my son's kindergarten teacher, Mrs. Hinkwhistle, who is a disinterested party."

But that's how scientists are treated by politicians.  And it's gotten worse.  Just yesterday, Scott Pruitt, who is the de facto leader of the Environmental Protection Agency despite his apparent loathing of both the environment and the agency, announced that there was going to be a purge of scientists on EPA advisory boards. 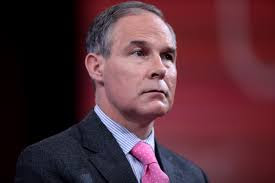 "What’s most important at the agency is to have scientific advisers that are objective, independent-minded, providing transparent recommendations,” Pruitt said when he spoke to a group at the Heritage Foundation, an anti-environmental, pro-corporate lobby group.  "If we have individuals who are on those boards, sometimes receiving money from the agency … that to me causes questions on the independence and the veracity and the transparency of those recommendations that are coming our way."

Can't have that, after all.  Those doctors are clearly biased to be in favor of policies that promote better health care services, because then they get money for providing those services.  Better populate the medical advisory boards with people who know nothing whatsoever about medicine.

Of course, I am morally certain that the purging of trained scientists from EPA advisory boards is not simply because of this administration's anti-science bent, although that clearly exists as well.  The fight between corporate stooges like Scott Pruitt and the scientific community stems from the fact that much of what the scientists are saying runs counter to economic expediency.  You know, such things as:
All of which we environmental types -- by which I mean, people who would like future generations to have drinkable water, breathable air, and a habitable world -- have had to fight in the past year.  The Trump administration's approach to environmental policy is like the Hydra; you cut off one foul, pollution-emitting head, and it grows two more.

The whole thing is driven by a furious drive toward deregulation, which in turn comes out of unchecked corporate greed.  Jennifer Sass, senior scientist for the National Resources Defense Council, nailed it:  "Pruitt’s purge has a single goal: get rid of scientists who tell us the facts about threats to our environment and health.  There’s a reason he won’t apply the same limits to scientists funded by corporate polluters.  Now the only scientists on Pruitt’s good list will be those with funding from polluters supporting Trump’s agenda to make America toxic again."

Michael Halpern, deputy director of the Center for Science and Democracy, agreed.  Halpern said that if Pruitt succeeds in his purge, he "would be willfully setting himself up to fail at the job of protecting public health and the environment."

The problem is, stories like this get buried in the ongoing shitstorm that has characterized the leadership of the United States in the last ten months.  It's another Hydra, and people simply can't pay attention to all of the horrible news at the same time.  That's what they're counting on -- that with outrages over kneeling athletes and disrespect by the president of military widows and allegations of sexual impropriety, we'll just ignore the fact that while all this other stuff is happening, our leaders are gutting every protection the environment has gained in the last fifty years.

You'd think that with the natural disasters this year -- unprecedented hurricanes and wildfires and floods -- we'd wise up and say, "You know, maybe it's time we started paying attention to the damage we've done."  But unfortunately, we're heading in exactly the opposite direction.  My fear is that by doing this, we're making the eventual backlash from the environment unstoppable.

And it would be a Pyrrhic victory, but I hope Scott Pruitt is around to watch it happen.
Posted by Gordon Bonnet at 1:56 AM