Some days it's no great mystery why the general public is dubious about scientists.

I mean, a lot of it is the media, as I've discussed here at Skeptophilia ad nauseam.  But there are times that the scientists themselves put their best foot backward.  As an example, consider the announcement from the World Health Organization this week that their Research & Development Blueprint for priority diseases includes "Disease X."

A disease that is as-yet unidentified.

The blueprint itself says this:


Disease X represents the knowledge that a serious international epidemic could be caused by a pathogen currently unknown to cause human disease, and so the R&D Blueprint explicitly seeks to enable cross-cutting R&D preparedness that is also relevant for an unknown “Disease X” as far as possible.

On the one hand, there's a grain of sense there.  Recognizing the fact that there are "emerging diseases" that are apparently new to humanity, and that could cause epidemics is the first step toward readying ourselves for when that happens.  (Recent examples are Ebola and Lassa fever, Marburg virus, Severe Acute Respiratory Syndrome (SARS), and chikungunya.) 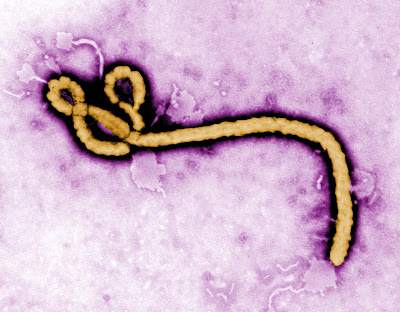 The Ebola virus [image courtesy of the World Health Organization]

But still.  What the WHO is telling the public is that they're putting time and effort into preventing an epidemic from a disease that:
Is it just me, or does this seem like an exercise in futility?

Like I said, an awareness of the unpredictability of disease outbreaks is a start, but this seems like trying to nail jello to the wall.  Each time humanity has been faced with a potential pandemic, we've had to study the disease and how it moves from one host to another, scramble to find treatments for the symptoms while we're searching for an actual cure (or better yet, a vaccine to prevent it), and do damage control in stricken areas.  So I can't see where the "Disease X" approach gets us, except to put everyone on red alert for an epidemic that may never happen.

I think my eyerolling when I read about this comes from two sources.  First, I'm all too aware that life is risky, and although it's certainly laudable to try to reduce the risk as much as you can, the bare fact is that you can't remove it entirely.  After all, none of us here are getting out of this place alive.  And second, there is an unavoidable chaotic element to what happens -- we get blindsided again and again by bizarre occurrences, and the professional prognosticators (not to mention professional psychics) get it wrong at least as often as they get it right.

So there probably will eventually be a new emerging epidemic.  On a long enough time scale, there's probably going to be a true pandemic as well.  I hope that with our advances in medical research, we'll be able to respond in time to prevent what happened during the Black Death, or worse, the Spanish flu epidemic of 1918 to 1919, that killed an estimated 40 million people (over twice the number of deaths as the battlefield casualties of World War I, which was happening at the same time).

In one sense, I take back what I said about not being able to do anything about it ahead of time.  We can give ourselves the best shot at mitigating the effects of an outbreak -- by funding medical research, and encouraging our best and brightest to go into science (i.e., education, a topic I've also rung the changes on more than once).  Other than that, I'm just going to eat right, exercise, and hope for the best.
Posted by Gordon Bonnet at 3:55 AM